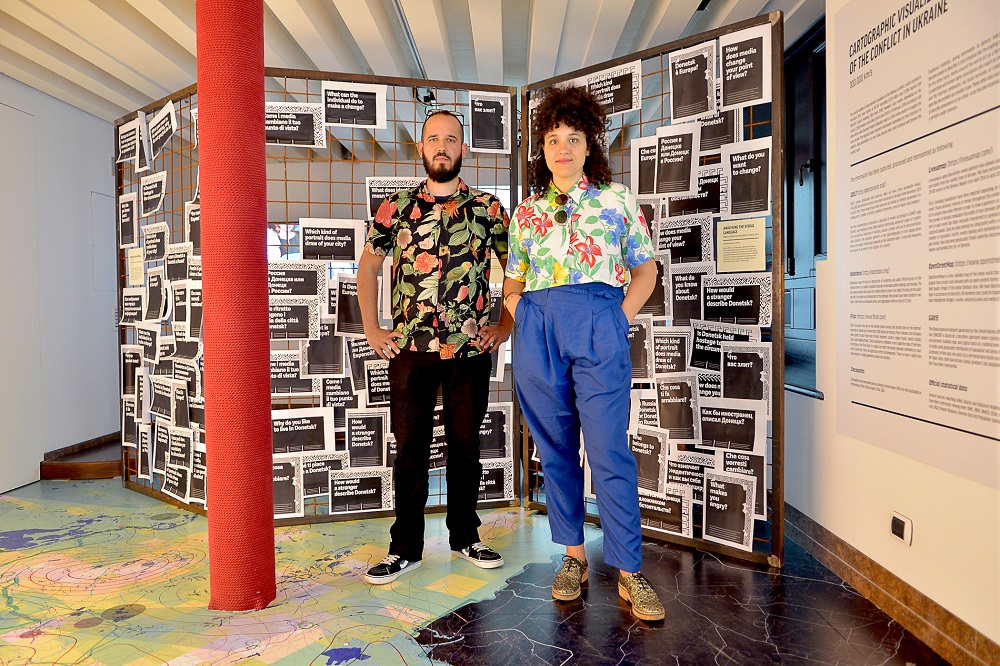 Ukraine is part of this year’s edition of the “Biennale Architettura” International Architecture Exhibition in Venice. Ukrainian project “Beyond the Front” is presented in the collateral events program by the Izolyatsia foundation. The project looks at urban life in areas of conflict by juxtaposing government-controlled Mariupol and occupied Donetsk. UCMC speaks to Izolyatsia team about Ukraine’s presence at the biennial and the “Beyond the Front” project.

“Beyond the Front” project is presented at the Biennial by Izolyatsia platform for cultural initiatives – a non-governmental organization. The project is based on the findings of foundation’s residency program “Architecture Ukraine” held in Kyiv and Mariupol in summer 2015. Back then, “Izolyatsia” invited international and local artists to explore the urban space of the frontline city of Mariupol.

The project is on show within the International Architecture Exhibition’s collateral events program. According to Anna Medvedeva, Izolyatsia’s Communications Director, Ukraine’s Foreign Affairs Ministry provided information support to the project. State agencies also claimed ready to learn from the foundation’s experience so that Ukraine is presented in the official program at the next edition of the architectural biennial.

What the project is about? “Beyond the Front” focuses on urban life of the two cities of Donetsk region: liberated and government-controlled Mariupol and occupied Donetsk. The project is curated by Rick Rowbotham (UK) and Krists Ernstsons (Latvia) in collaboration with Clemens Poole (NY). The project’s artistic pool includes Romea Muryn (Poland), Francisco Lobo (Portugal), Fulco Treffers (the Netherlands), Danielle Rosales (Germany) and Robin Coenen (Germany).

The exhibition space consists of two rooms, one of which represents Mariupol – and the Ukraine-controlled part of Donetsk region, the other represents Donetsk and the occupied part of the region, explains Mykhailo Glubokyi, Izolyatsia’s project coordinator.  Mariupol is narrated by international artists based on their field trips to the city that they undertook as part of Izolyatsia’s residency program. In a 45-minute film produced by Polish architect Romea Muryn and Portuguese filmmaker Francisco  Lobo, Mariupol residents including factory workers, management and historians voice the problems of their city of economic, social and cultural nature. Another artistic piece presents Mariupol as a visual information chart where the city-related data is grouped by themes or layers, explains Glubokyi. Thus one may check the data related to a specific sector, say, industry or education, and see it in the general context. 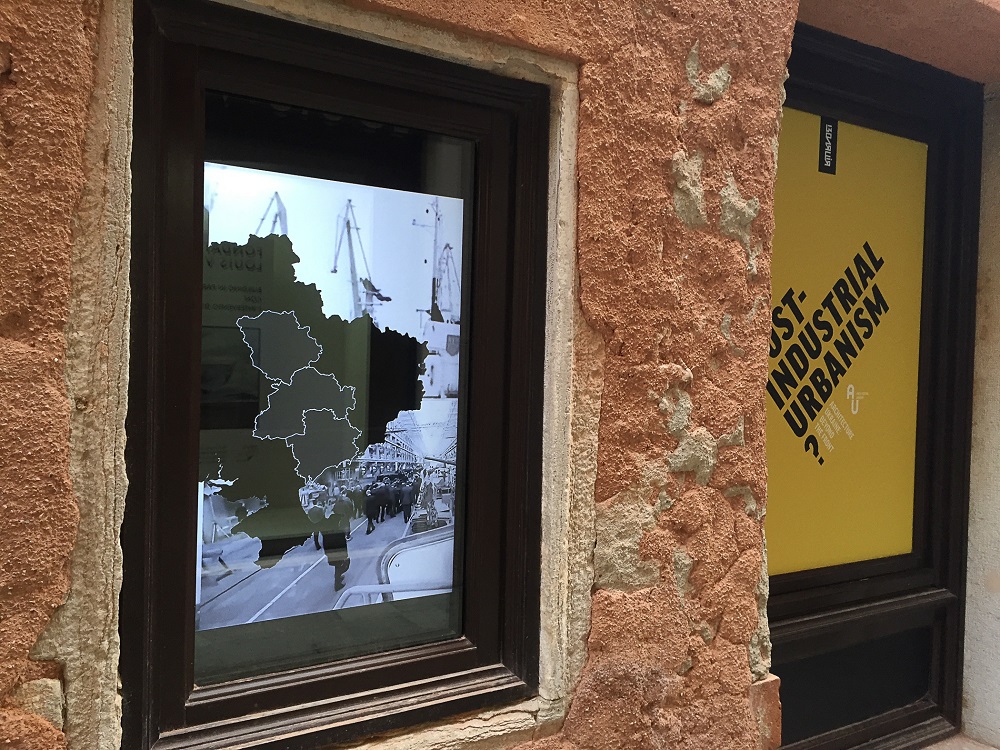 The Mariupol section of the project also has a series of interactive post-it placards that German artists Danielle Rosales and Robin Coenen put in the city’s public space last summer using them as a research method. They asked Mariupol residents questions about their life and attitude to the city encouraging them to answer by directly writing on the placards or by e-mailing the artists.

“We would like to pose the same questions to the residents of Donetsk, but we can’t,” says Glubokyi. Izolyatsia itself moved from the occupied Donetsk back in summer 2014 after the foundation’s premises were seized by Russia-backed militants and its artistic funds were partially destroyed. Militants are currently using the premises as a prison and training ground. Some of Izolyatsia’s staff members are on the militant black list and cannot go back for security reasons. The international artistic team would most likely be granted no access to the occupied territories by the occupying forces or face a serious security threat. 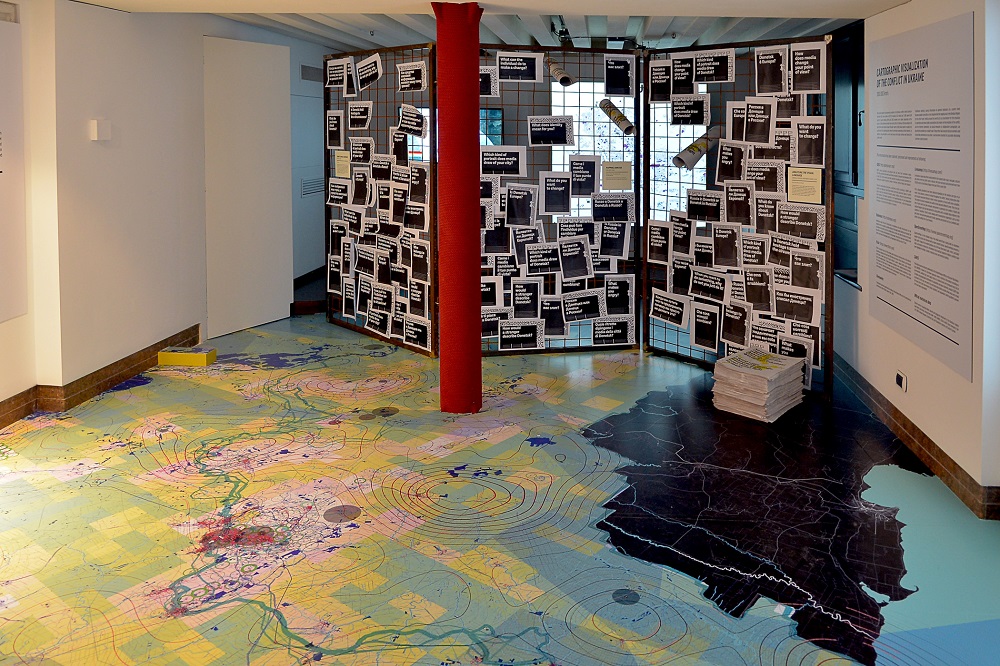 “We tried to get the contacts of people residing in Donetsk from the architectural or urban planning community but neither of them wanted to speak on camera,” continues Glubokyi. Symbolic “wall” that the artists constructed in the second room of the project space is set to “demonstrate that we cannot get there,” says Mykhailo. Instead the unasked questions are placed on the wall and visitors are invited to watch the video through the holes in it. The video is a mix of footage found on YouTube channels of Russia-backed militants shot and broadcast in the occupied territory. People on the video speak about the future of their city. Most of the footage is propaganda, notes Glubokyi. 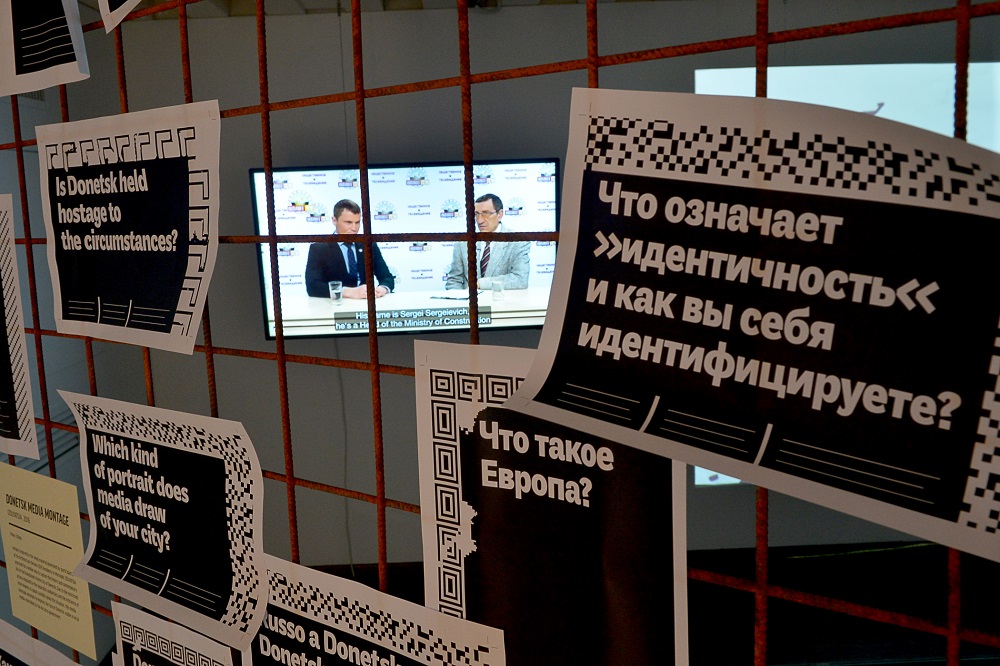 Between the two rooms there is a map printed on the floor that represents the area’s military and economic life over the past two years. A Spanish artistic team created this piece based on open source data as well as on information provided by the UN. The map shows the contact line and how it has changed over the time, combat spots, checkpoints and GDP per m2 of the area.

According to Anna Medvedeva most of the pavilion’s visitors were familiar with the context and purposefully came to see the Ukrainian project. Over the first three days majority of the visitors were industry experts including curators of other pavilions, professionals and media. Visitors from a variety of countries including but not limited to Georgia, Poland, the Baltic States, Italy and Russia have paid a visit to the exhibition.

Cover photo: artists Robin Coenen and Danielle Rosales pose against the interactive post-it placards that they used as a tool to speak to Mariupol residents last summer.