Kyiv, June 23, 2016. The situation in the ATO zone escalated yesterday. “The adversary is actively using heavy armor in all the sectors, using 82-mm and 120-mm mortar launchers, 122-mm and 152-mm cannons. According to estimates by the General Staff, over 300 mortars and 160 missiles were launched at our positions yesterday. Moreover, hostile snipers are active. It is safe to say that hostilities in ATO zone have reached a level not seen since August 2015 ,” informed the spokesman of the Presidential Administration on ATO related issues Colonel Oleksandr Motuzyanyk at the press briefing at Ukraine Crisis Media Center. Militants shelled Avdiivka and Pervomaiske with artillery, and attacked Vodiane with mortars. “The recent incident occured during the day and was registered by SMM OSCE observers who were present in the village at that time,” elaborated Col. Motuzyanyk. 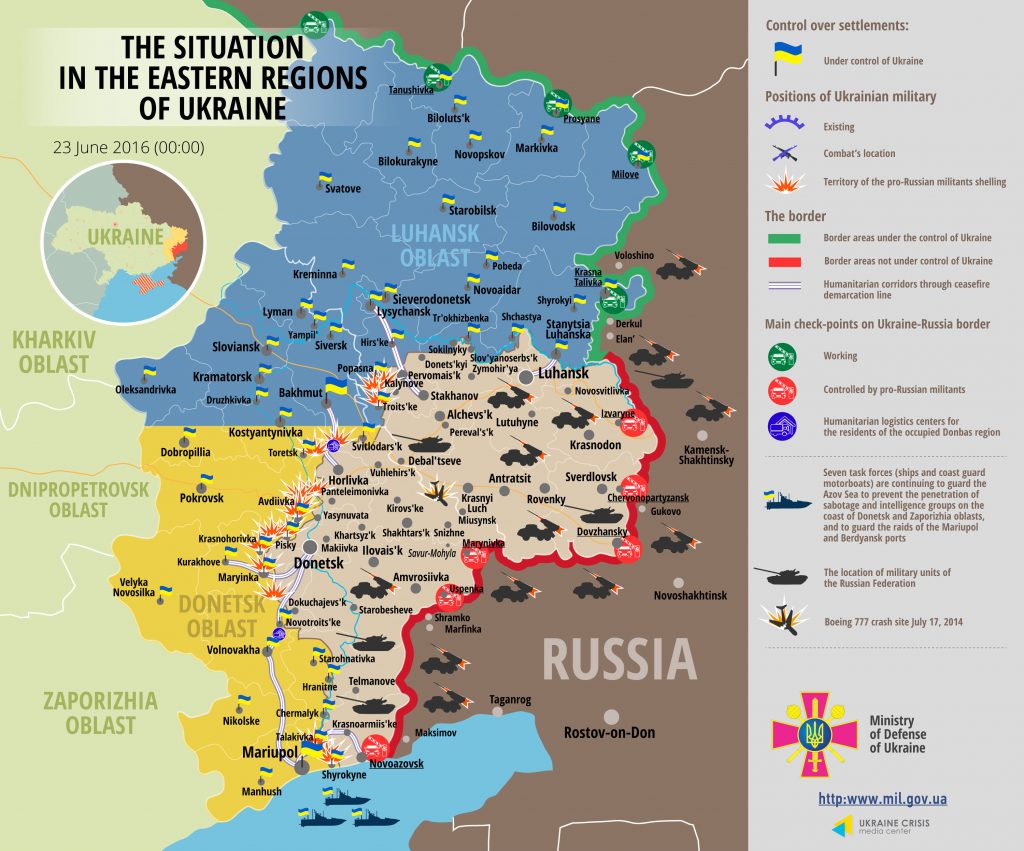 The situation is the most difficult in the Donetsk sector where 22 militant attacks were registered in 24 hours; almost all of them involved use of heavy armor. Col. Motuzyanyk said that Russia-backed militant groups were shooting along the entire frontline from Zaitseve to Donetsk airport, engaging all types of weapons save Grad multiple rocket launcher systems. The outskirts of Horlivka and Avdiivka industrial areas and the vicinity of Pisky are central flashpoints for violence. “It must be mentioned that the enemy often uses artillery to shoot at our positions on the second line of defense and rear area,” informed the spokesman.

In the Luhansk sector combat activity continued only in Popasna area. Eight militant attacks took place there over 24 hours, six involved use of heavy armor. “Hostile mortar batteries and 122-mm cannons are deployed in the neighbouring Kalynove village, and 152-mm cannons in Horlivka at a distance of more than 20km from the impact point. The tactics prove that the occupation is attempting hide violations of the Minsk agreements, as they shell along the frontline during hours of darkness from large distance,” said Col. Motuzyanyk.

16 militant attacks took place in the Mariupol sector; they shot from heavy armor five times. “Militants used mortars in Taramchuk and in Talakivka-Shyrokyne area. Hostile snipers in Mariinka fired several shots,” elaborated Col. Motuzyanyk. He added that seven flights of unmanned aerial vehicles (UAV)  were registered in the ATO zone yesterday. One Ukrainian serviceman died in combat yesterday and 11 were wounded. “Ukrainian Armed Forces incurred losses in all the sectors as a result of militant attacks,” informed Col. Motuzyanyk.

According to the Chief Intelligence Directorate of the Ministry of Defense of Ukraine, echelon carrying enemy military equipment – two self-propelled artillery mounts, six armored personnel carriers, six howitzers and 10 trucks – came to Chervonopartyzansk in Luhansk region from the Russian Federation. “The equipment was unloaded and proceeded towards Luhansk,” said Col. Motuzyanyk. Two tanks came by railway to Debaltseve for militant of the so-called “7th separate motorized rifle brigade”. Moreover, the 53rd “humanitarian convoy” from the Russian Federation crossed the Ukrainian border. “We emphasize that the so-called “humanitarian convoy” is a blunt violation of international and Ukrainian legislation. Ukrainian intersectoral task force only observed the convoy movement, and did not perform any monitoring functions,” emphasized the spokesman.

Col. Motuzyanyk mentioned that Ukrainian intelligence services discovered the illegal activity of Russian Colonel Volodymyr Cheban, a member of intersectoral task force. He passed monthly schedules and flight routes of OSCE UAVs to militants, allowing them to hide their firing positions and heavy equipment from the SMM observers. Moreover, he participated in creation of fake evidence in presumable violation of the Minsk agreements. Ukraine’s Security Service forbade him from entering Ukraine for five years.