Kyiv, June 27, 2016. In Donetsk sector, for the first time in a few weeks, militants did not use artillery. Illegal armed groups continued heavy mortar shelling in Troitske, Novoselivka Druha and Avdiivka. “After 5pm the adversary opened heavy fire around Avdiivka industrial zone. The fighting lasted more than six hours. The adversary attacked from their positions on the line Yasynuvata – Yakovlivka. Over the past day, militants fired 15 times in Donetsk sector, 9 of them – with the use of heavy weapons,” said Colonel Andriy Lysenko, spokesman of Administration of the President of Ukraine on ATO-related issues, at a press briefing at Ukraine Crisis Media Center. 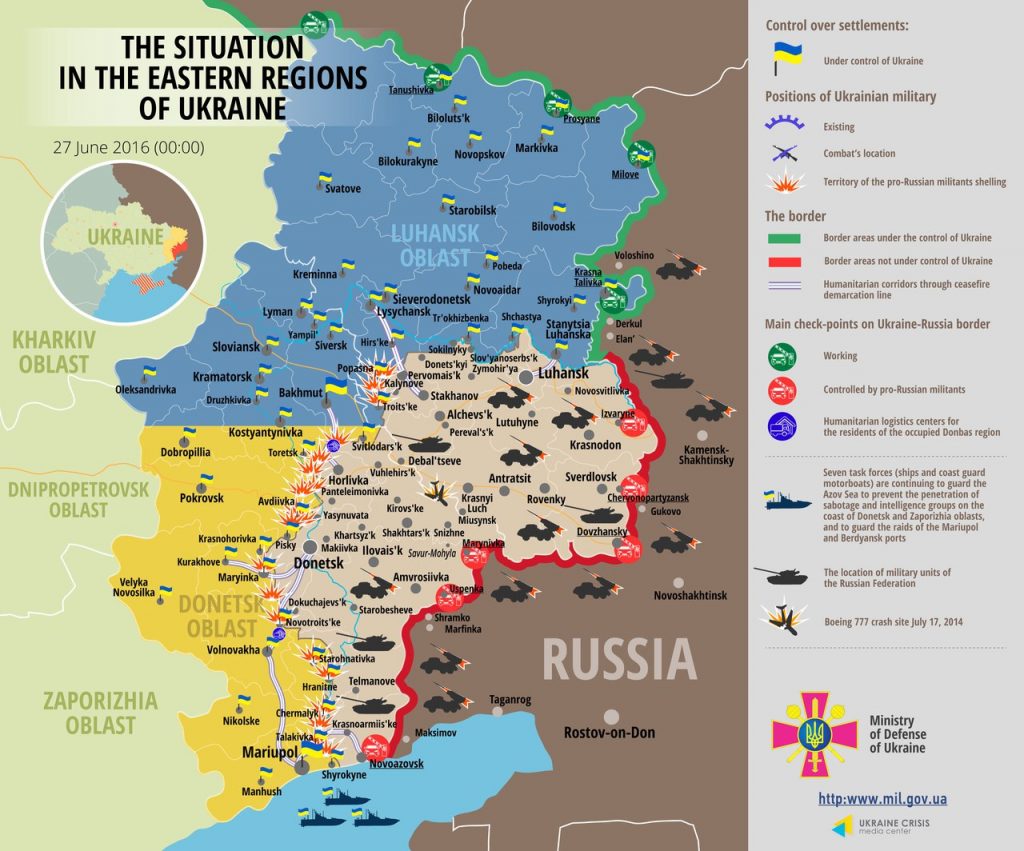 In Luhansk sector, militants made 4 attacks in the vicinity of Popasna in the night-time yesterday, 2 of them – with the use of mortars.

In Mariupol sector, armed hostilities were conducted mostly in the afternoon. Militants used BMP and mortars all along the frontline. “The toughest confrontation yesterday was in Maryinka and close to Dokuchayevsk where Ukrainian troops were forced to open fire in response. Overall, the adversary continues attacking all major ATO strongholds. It was calm only in Krasnohorivka and Shyrokyne yesterday,” reported Col. Lysenko. Over the past day, in Mariupol sector militants carried out 17 attacks, 5 of them with the use of mortars.

According to Defense Intelligence, the Ministry of Defence of Ukraine, militants used drones three times yesterday – in the vicinity of Pervomaysk and Popasna; close to Bila Hora, Dyliyivka and Kurdyumivka (Bakhmut district); in the vicinity of Poltavka and Rusyn Yar (Kostyantynivka district).

Over the last day, one Ukrainian serviceman was killed in action, another 4 were wounded.

Yesterday, there was a road accident close to the village of Faschivka, Luhansk region. The KamAZ truck was carrying militants from the so-called “7th separate motorized rifle brigade”. 6 Russian officers were killed, another 15 militants- wounded. “It was found that the adversary units were going to the training ground,” added the spokesman.

From June 27 to July 8, 1,800 servicemen from 14 countries will participate in training to improve their combat skills and interoperability between units of different countries. “This time, in addition to the Armed Forces units, Ukraine for the first time will be represented by a troop from the rapid response brigade of the National Guard. The National Guard servicemen will gain experience of military training based on a modern model of military organization of NATO member countries,” explained Col. Lysenko.