Fire goes on along almost all the contact line, militants down Ukrainian UAVs. Famous opera singer dies in the ATO zone.
Kyiv, June 29, 2016. The most intense fighting in the ATO zone continued in the Avdiivka industrial area, where Russia-backed militant groups were shooting non-stop, informed the spokesman of the Presidential Administration on ATO related issues Colonel Andriy Lysenko at a press briefing at Ukraine Crisis Media Center. “The adversary traditionally attacks from two directions – Spartak in the south and Yasynuvata in the east. Moreover, the occupants used mortar launchers many times yesterday, namely in Novhorodske and in the Avdiivka-Krasnohorivka area. About 120 mortar shells were launched at our positions,” he elaborated. According to the spokesman, Ukrainian troops are actively responding with fire on order to stop militants’ aggression. 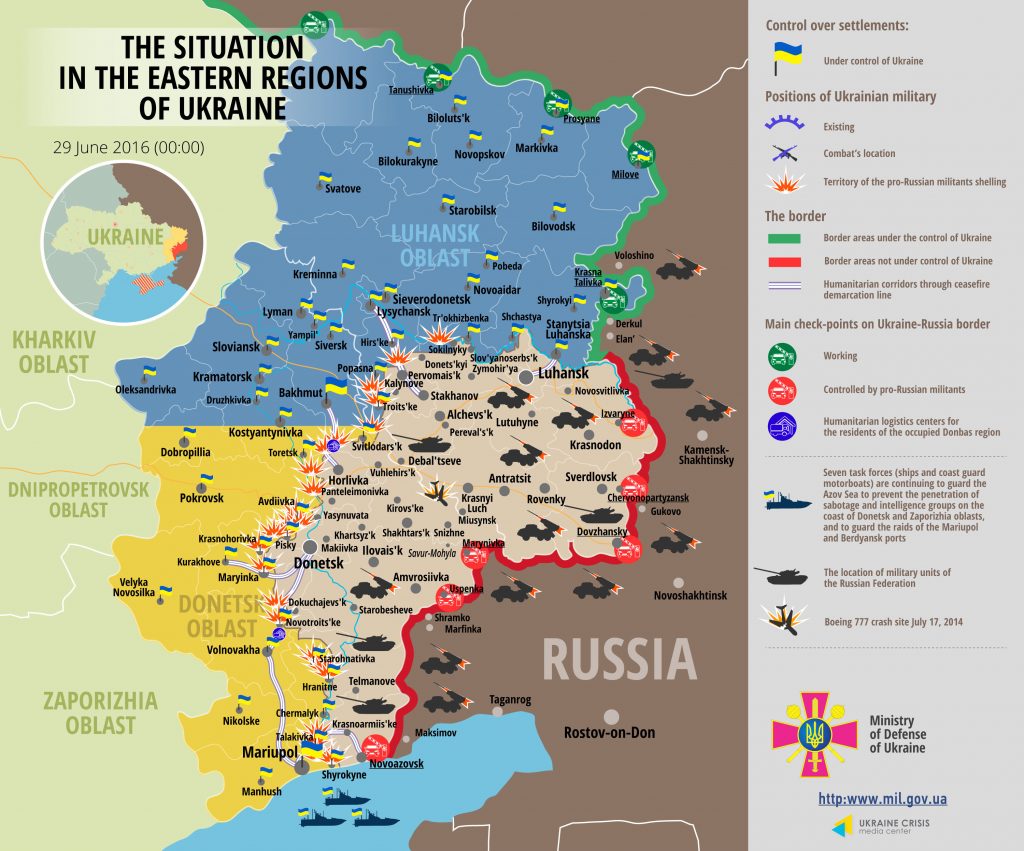 Col. Lysenko informed there were three militants’ attacks in the Luhansk sector yesterday. All of them took place in the evening in various sections: in Krymske, Zolote and Novozvnivka. The third shelling involved use of mortar launchers. Militants launched 28 mortar shells at Ukrainian positions in 15 minutes. The situation remains unchanged in the Mariupol sector. Russia-backed militant groups continue using heavy armor prohibited by the Minsk agreements. “For instance, heavy artillery attacks conducted by militants took place in Novotroitske and Lebedynske. Moreover, hostile snipers were shooting repeatedly. Ukrainian troops regularly respond with fire to the enemy’s aggressive actions,” informed Col. Lysenko. According to him, this mostly refers to the vicinity of Dokuchaevsk and Talakivka-Shyrokyne frontline area.

The spokesman said that participants of Rapid Trident 2016 military exercise started practical training at the International Center of Peacekeeping and Security in Lviv region. “A marine platoon practiced tactical mission on securing an important objective,” he said. Col.  Lysenko reminded that Ukrainian marine brigade has a considerable experience of combat in the Mariupol sector.

Update: the information on Vasyl Slipak’s death in the ATO zone has been confirmed. It happened this morning, on June 29, near Luhanske village in Bakhmut district, Donetsk region. The body has been admitted to Bakhmut town morgue. Military command expresses their condolences to the friends and family of the fallen hero.