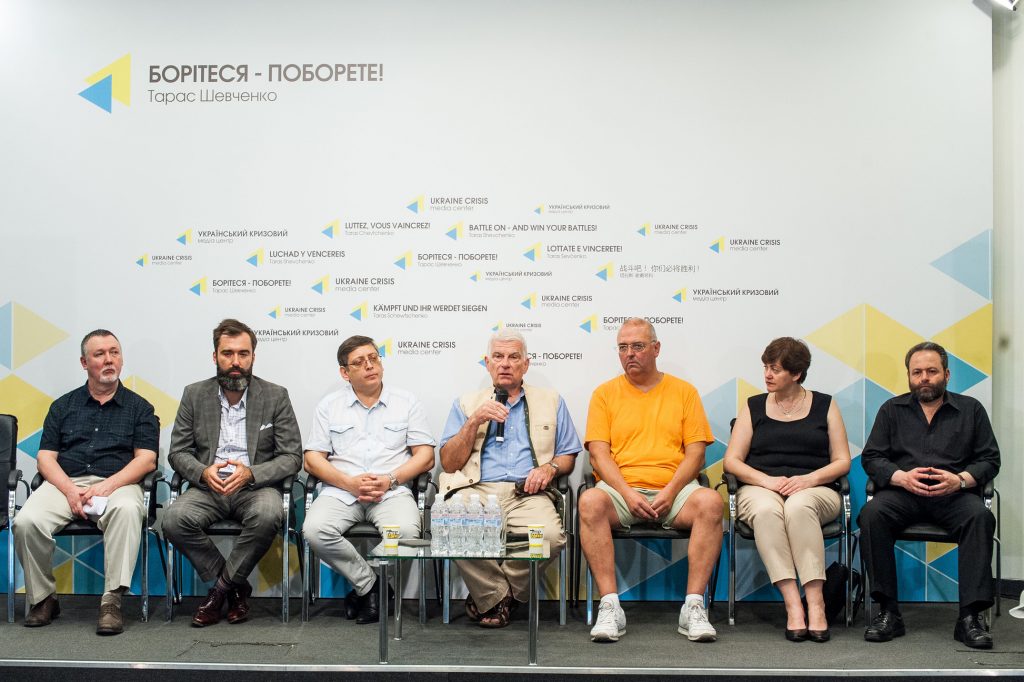 Local and foreign activists see Ukraine become a mature nation, as it prepares big program to commemorate the genocide of Jewish people this autumn.

Kyiv, July 1, 2016. This September Kyiv commemorates 75th anniversary of Babyn Yar tragedy. The program will consist of four components: youth forum, public research symposium, presentation of memorial space “Babyn Yar” in Dorohozhychi Park in Kyiv and a concert on September 29 at the Opera House also in Kyiv. This was reported by Prof. Paul Robert Magocsi, Coordinator of this project and Member of the Board at the Ukrainian Jewish Encounter, at a briefing at Ukraine Crisis Media Center.

Pavlo Gunka, opera singer, art director of the Ukrainian Art Song Project, chairperson for commemorative concert, said that the performance at the Opera would be done in form of a “dramatic concert.” “There will be a lot of movement; the audience will be invited to participate. There will be direct contact with the public who will be invited to respond to the emotions,” explained Mr. Gunka. He says that they plan to perform requiems of Stankovych and Brahms. According to him, these works are not sad instead “they affirm hope.” “I agreed to participate in the event, because I see that Ukraine gradually becomes an mature nation. It accepts that all these atrocities took place on its land. It took Britain 200 years to recognize slave trade in its territory, and Ukraine – only 25 years to recognize that the genocide of Jews took place on its land. I applaud the country for this,” he declared.

Dr. Ihor Schupak, Director of the Ukrainian Institute for the Study of the Holocaust “Tkuma” and of the Museum of Jewish Memory and the Holocaust in Ukraine, director for youth program, informed that hundreds of young activists from the US, Canada and Europe will attend the Youth Forum. “We will clarify the question of historical memory without which it is impossible to understand the present and think about the future. It is important for the young generation, which will equip the future. We will also discuss issues of cooperation between different ethnic communities, culture, politics, philosophy, etc.,” he explained. According to Mr. Schupak, participants are selected on a basis of creativity and scientific competitions among NGO leaders recommended by professors and experts involved in education projects. Besides, all interested people can write a motivation letter.

Dr.  Lyudmila Grynevych, Senior Research Fellow at the Museum of History of Ukraine, Director of the Holodomor Research and Education Center, Chairperson for Public Symposium, coeditor of the memorial book, informed that the symposium will be held on September 26-28. Not only historians but also political scientists, art and literary critics, philosophers from around the world will participate in the expert discussion.

Dr. Vladyslav Hrynevych, Senior Research Fellow at the Jewish History & Culture Department, Kuras Institute of Political and Ethnic Studies, National Academy of Sciences of Ukraine; coeditor of the memorial book, noted that in addition to its historical context, the book will provide insight into the place of Babyn Yar in politics of memory. “The memory of Babyn Yar is important for the formation of Ukrainian identity. Without embedding the Holocaust and its symbol – Babyn Yar in Ukrainian consciousness we cannot attempt to join the European family,” believes Mr. Hrynevych.
Dr. Vitaliy Nakhmanovych, Executive Secretary of the Public Committee for Commemoration of Babyn Yar Victims, added that based on the results of the architectural competition of ideas for organizing a memorial park “Babyn Yar,” seven best projects will be presented. All visitors will have a possibility to learn about these projects at the Ukrainian House. On September 28, three best works will be presented with the participation of their authors coming from Slovenia, the USA, France and Colombia.