Kyiv, July 4, 2016. Three militants’ attacks took place in the Luhansk sector in the ATO zone yesterday. Russian mercenaries’ sniper was shooting about 30 minutes on the Bakhmutiv road. Moreover, two militants’ provocations were instigated near Novooleksandrivka in the Popasna district. Militants continue using heavy armor along the entire frontline, both during the day and at night, said the spokesman of the Presidential Administration on ATO related issue Colonel Andriy Lysenko at a press briefing at Ukraine Crisis Media Center. “Enemy artillery attacks took place in Zaitseve and Pisky, and mortars were used along the entire perimeter of the occupied Horlivka, Avdiivka and close to the Donetsk airport. Especially intense firefights between the ATO troops and the occupants repeatedly took place in Maiorsk and Avdiivka industrial area,” he explained. In the Mariupol sector, Russia-backed militant groups repeatedly used artillery in Talakivka-Shyrokyne area. Militants launched over 80 shells. The situation was restless in Mariinka area, while the armistice fully held near Dokuchaevsk. 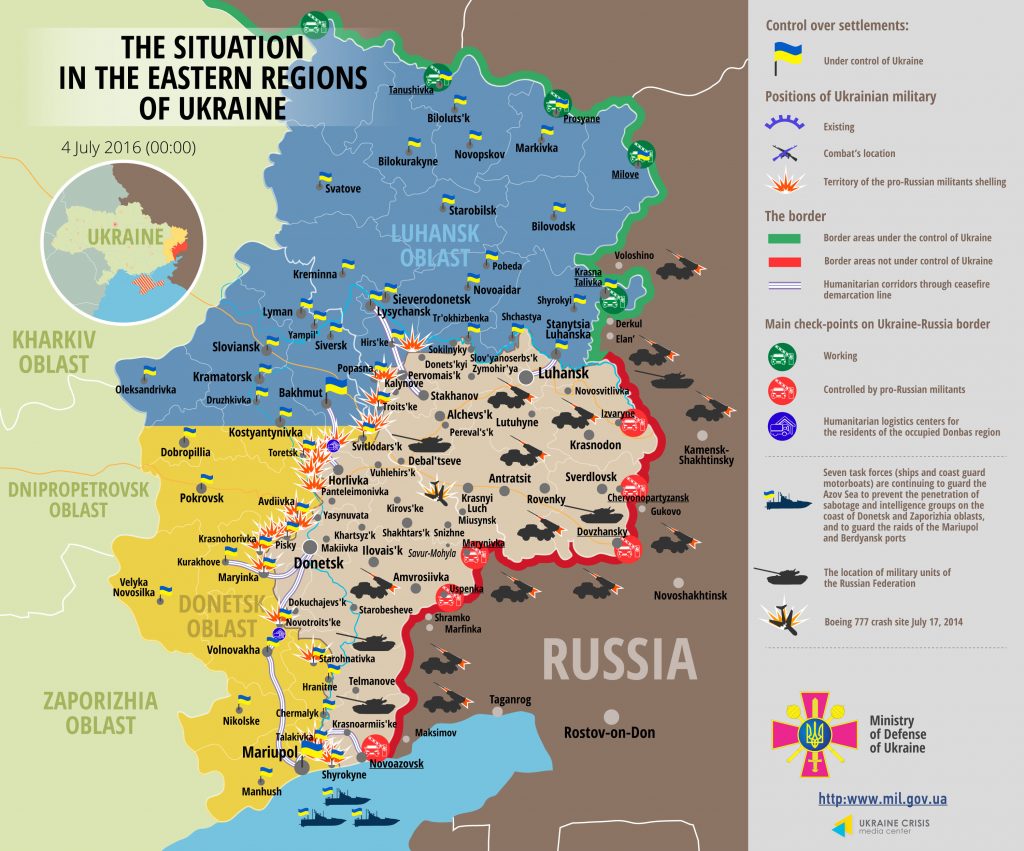 According to the spokesman, militants used unmanned aerial vehicles four times yesterday. “One of them was launched from the Russian territory and the remaining three were used in the Mariupol sector: Mariinka, Novotroitske and near the sea coast,” he said.

Colonel Lysenko stated that Ukrainian Armed Forces incurred no losses in combat yesterday, but two troops were wounded. At the same time, five militants died and six were wounded. “A commander of so-called 7th separate motorized rifle brigade of the Russian occupational army, colonel of the Russian Armed Forces Aleksandr Bushuev died yesterday in the rear of militant positions, near Khartsyzk, as a result of activation of a fragmentation mine. His two guards, Russian career officers, were heavily wounded, explained the spokesman. According to Col. Lysenko, Col. Bushuev was in a state of conflict both with his command and his subordinates. He was dismissed from his duties and sent to Donetsk, and his vehicle tripped a mine while travelling to Donetsk.

Col. Lysenko said that Ukraine recently received 14 counter-battery radars from the US government. They are the newest and most advanced means for location and destruction of enemy’s artillery. “The US Army uses the same radars. The American system allows for efficient location of enemy batteries and prompt transmission their coordinates to our artillery for prompt response to the opponent’s’ aggressive actions,” said the spokesman.

Col. Lysenko also informed that the President of Ukraine appointed a new Chief Commander of Ukrainian Naval Forces, Ihor Voronchenko. “He served in Crimea before war and remained loyal to his military oath during Russian occupation, having moved to the mainland,” emphasized Col. Lysenko.