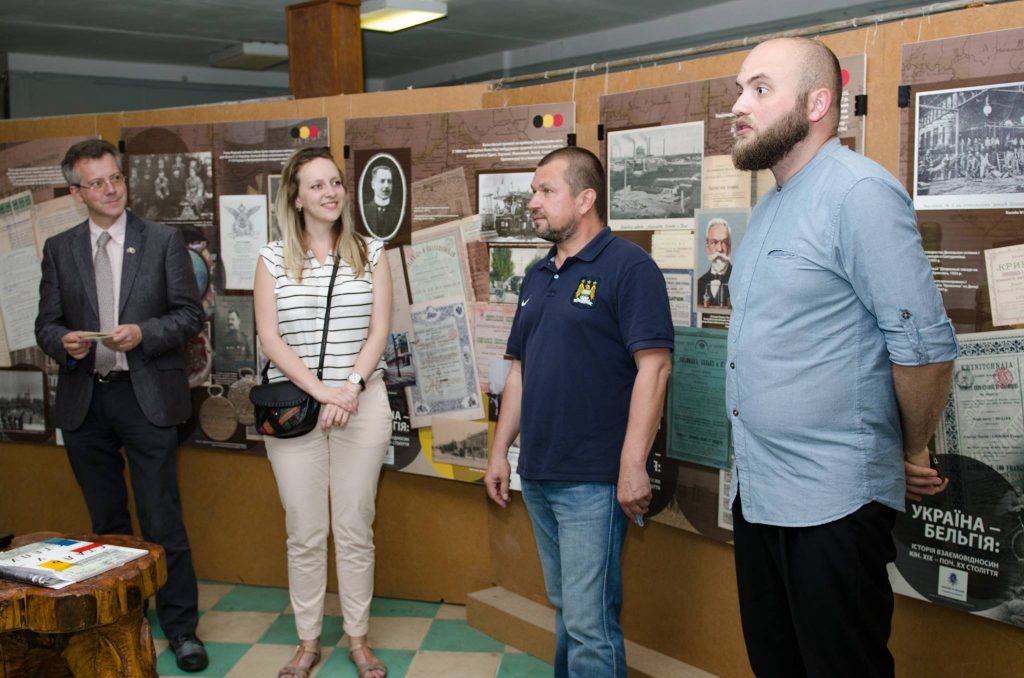 Druzhkivka, June 30, 2016. The Ukrainian City of Druzhkivka in Donetsk Oblast is home to a shared history to both Belgians and Ukrainians. Belgian history in Druzhkivka dates back to the 19th century when entrepreneurs decided to build their factories here. Much of the shared history had been forgotten during the Soviet years. The exhibition “Belgian investment in Ukraine in late XIX – early XX century” invites the local population to rediscover the common past and encourage restoring Belgian-Ukrainians links. The exhibition has already been brought to a number of cities in East Ukraine and now for two weeks it is open for citizens of Druzhkivka before moving to Kostiantynivka.

Exhibition opening in Druzhkivka on July 30 was an exciting moment as it gathered high-esteem public officials, many interested civilians, media and historians at the local history museum. Deputy Head of Mission of the Embassy of Belgium in Ukraine Jean De Lannoy opened the event noting in his speech the great accomplishments of when Belgium and Druzkivka worked hand-in-hand over a century ago. Ukrainian patron of arts Dmytro Pirkl shared insights on creating the exhibition and his counterpart, coordinator of the Art & Culture Department at Ukraine Crisis Media Center, Leonid Marushchak stressed on importance of revisiting the neglected history of the two countries through modern art.

At the meeting city mayor Valeriy Gnatenko, Mr. De Lannoy discussed how Belgium and Druzkivka potentially restoring the ties, touched upon possibility of “twinning” Druzkivka with a Belgian city and spoke of interest of the current Belgian companies tracing back their history to Druzkivka and restoring some of their former factories and/or buildings. Belgium would like to see a relationship of substance between a Belgian city and Druzkivka before such a cultural tie takes place. The implementation of reforms and rule of law were also points that the Deputy Ambassador spoke to. Dmytro Pirkl and Leonid Marushchak encouraged the authorities to support culture developments and active citizenship in the city.

The next stop was meeting with activists and involved citizens of Druzkivka. For two hours activists and the diplomat exchanged opinions on activism on the city level. The group marked poor local governance. Locals shared the troublesome situation on political views in Druzhkivka, characterizing the landscape as 20-20-60 ratio: 20 per cent of the population considered themselves patriots, 20 per cent had separatist leanings, and the remaining 60 per cent had pro-Ukrainian views but were not willing to share them openly. One activist stated, “that we will win once we turn the 60 per cent over to our side,” noting that pro-Russian propaganda and lack of knowledge of Ukrainian culture are the main reasons why separatist leanings remains in the city.

The group also paid a visit to the local Orthodox Church to speak of its history and ties to the Belgian and French investors in the early 20th century.

Among the successful examples of local business is the Greta factory producing over 1000 ovens a month. Greta used to export its goods mostly to Russia and now reoriented for parts of Europe. Mr. De Lannoy gladly spoke to the Director of Greta Mr. Viktor Annenkov about the new markets, as he was interested in the effects of the new trade agreement between Ukraine and the EU on this particular business.