Kyiv, July 5, 2016. Two militant attacks took place in the Luhansk sector in the ATO zone near Novozvanivka village in Popasna district, one of them involved the use of mortars. The situation largely improved at the Svitlodarsk bulge in the Donetsk sector: militants violated the armistice only two times. It took place near Troitske and Luhanske, said the spokesman of the Presidential Administration on ATO related issues Colonel Andriy Lysenko at a press briefing at Ukraine Crisis Media Center. “Nevertheless, the enemy switched to active use of mortars and cannons north and west of Horlivka. Occupants shelled Toretsk and vicinities using heavy armor, hitting residential quarters. Private houses, gas network and an empty house at allotment association were damaged. There were no casualties among the civilians,” said the spokesman. 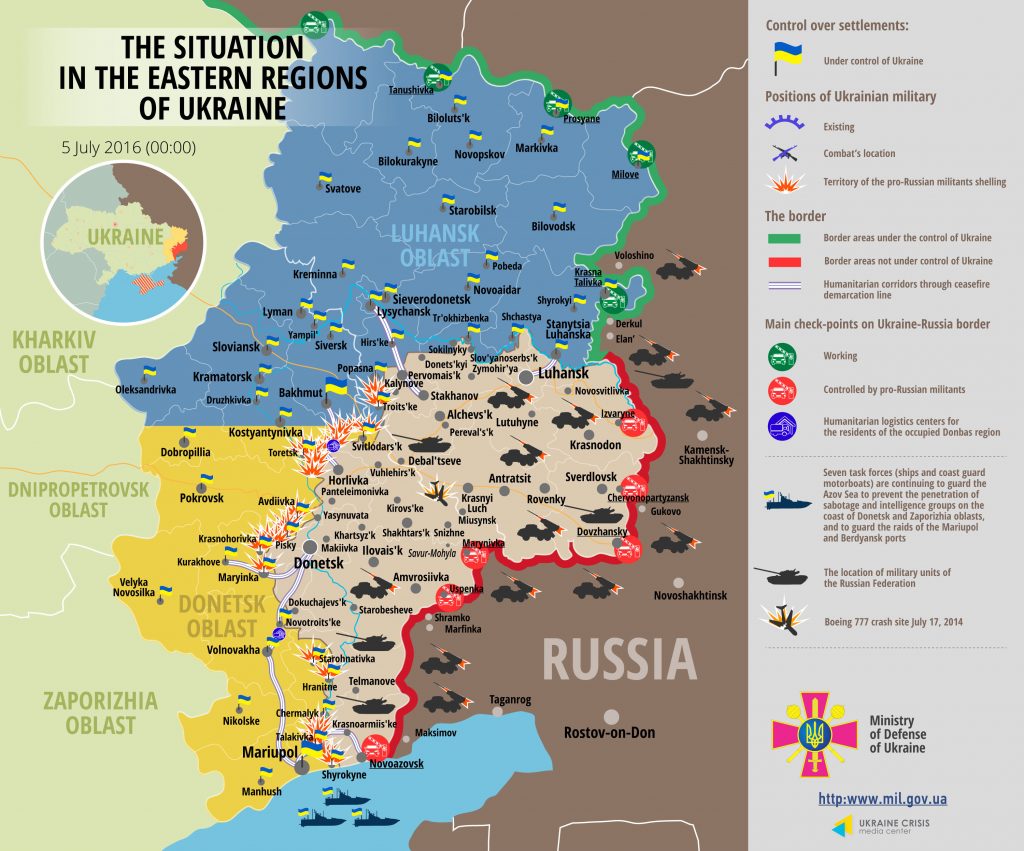 According to Col. Lysenko, militants fired 57 shells from self-propelled artillery mounts in Holmivskyi settlement at the area of Zaitseve and Dacha. A civilian was wounded during militant shelling of Avdiivka. Militant mortar shelling in the vicinity of Nevelske lasted almost one hour.

The spokesman also informed that militants continue intense mortar attacks in the Mariupol sector. “Insurgents launched over 120 shells at our positions in Krasnohorivka, Mariinka and in Hnutove-Shrokyne frontline area. Militants’ projectile hit a private house in Mariinka,” he said.

Moreover, militants sporadically use armor and antitank missile systems. Ukrainian troops repeatedly respond with fire. Absolute armistice held in one of the major “flashpoints” in the Mariupol sector, near Dokuchaevsk. “It is explained by the OSCE SMM visit which made the adversary temporarily abandon their aggressive actions,” explained Col. Lysenko.

According to him, three Ukrainian servicemen died in combat yesterday and 13 were wounded.

Military intelligence informs that the command of Russia-backed militant groups, effectively officers of Federal Security Service of the Russian Federation and self-proclaimed “Ministry of State Security of Donetsk People’s Republic” searched over 60 houses in Horlivka in the past three days. “Occupants were seizing domestic communication appliances: smartphones, tablets, PCs, acoustic stereo systems with built-in radio receivers. These brutal actions take place under the pretense of anti-subversive measures,” informed Col. Lysenko. He also reminded that on this day two years ago Sloviansk and Kramatorsk were liberated from Russia-backed militant groups.