Militants continue instigating armed provocations in the Luhansk sector, while armored personnel carriers and armor are used along the entire frontline. 16 Ukrainian soldiers wounded in the past 24 hours. Militant casualties amount to seven people. 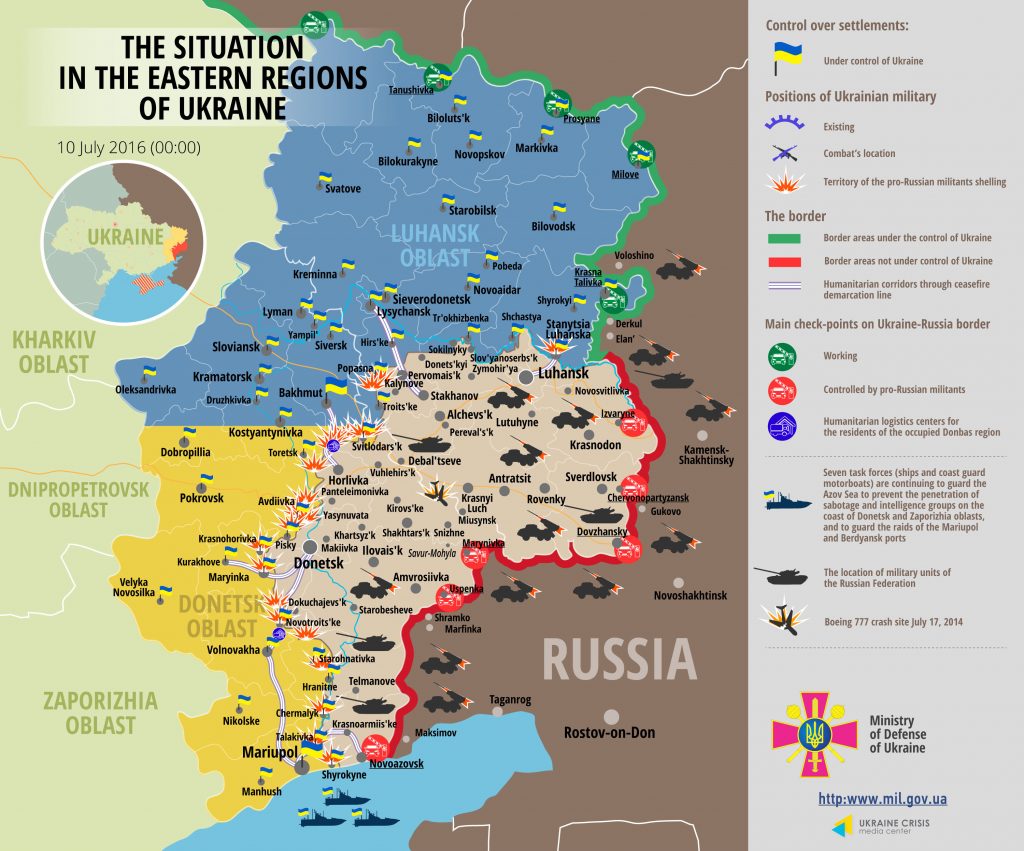 According to Col. Lysenko, armed provocations and attacks continued along the entire frontline in the Mariupol sector. Russian-backed militant groups delivered mortar shelling near Mariinka, Krasnohorivka, Chermalyk and Shyrokyne, Insurgents used grenade launchers and small arms there, and shot from an armored personnel carrier (APC) near Krasnohorivka, Moreover, sporadic provocations took place near Bohdanivka and Talakivka, and militant snipers were active near Novotroitske.

Avdiivka industrial area remains the major flashpoint in the Donetsk sector. Militants launched 104 mortar shells from 82mm and 120mm mortars there. Almost every attack was accompanied by aimed fire from grenade launchers, machine guns and small arms. Moreover, militants used an APC to shoot at Opytne village. They shot from grenade launchers, machine guns and small arms in Zaitseve and Novhorodske. “Attacks continue at the Svitlodarsk bulge, Militants are shooting from 122mm cannons, mortar launchers and armor at ATO troops near Luhanske settlement. Geography of attacks in the area expanded till Svitlodarsk town and Travneve village located on the other side of Vuhlehirske air reserve. Moreover, hostile mortar launchers and APCs were used near Svitlodarsk. Militants used mortar launchers and heavy artillery near Travneve. According to ATO Staff, militants positioned their weapons in several points from which they are shelling our positions, namely Lohvinove village on the way to Debaltseve and Holmivsky distrit,” elaborated the spokesman.

Three Ukrainian troops died and 16 were wounded yesterday as a result of fighting in the Donetsk sector. Eight soldiers out of the wounded sustained blast injury during artillery shelling of positions near Luhanske.

According to the spokesman, two militants died yesterday and five more were wounded from three self-proclaimed militant subdivisions. “Police officers detained a militant in Toretsk, A 44-yesr-old man participated in the occupation of the town in May-June 2014. The mercenary conducted checkups at a checkpoint located in the vicinity of Novhorodske in Donetsk region. His task lied in searching vehicles and finding Ukrainian patriots and inhabitants from other regions. The militant awaits trial at present,” summarized the spokesman.