Militants are using UAVs to conduct aerial reconnaissance. Mortar and artillery attacks last in all the sectors. Russia continues supplying fuel and equipment to support insurgents.

Kyiv, July 13, 2016. Militant attacks became less intense in the past 24 hours. The situation in the Donetsk sector remains difficult. The number of attacks reduced in comparison with the previous day, but militants continue actively and openly using heavy mortar launchers and artillery prohibited by the Minsk agreements. “Two thirds of all the cases of the ceasefire violations in the Donetsk sector is conducted using mortar launchers. For instance, the enemy launched over 200 mortar shells at Ukrainian positions in Avdiivka industrial area and the outskirts of Horlivka,” informed the spokesman of the Presidential Administration on ATO related issues Colonel Andriy Lysenko at a press briefing at Ukraine Crisis Media Center. 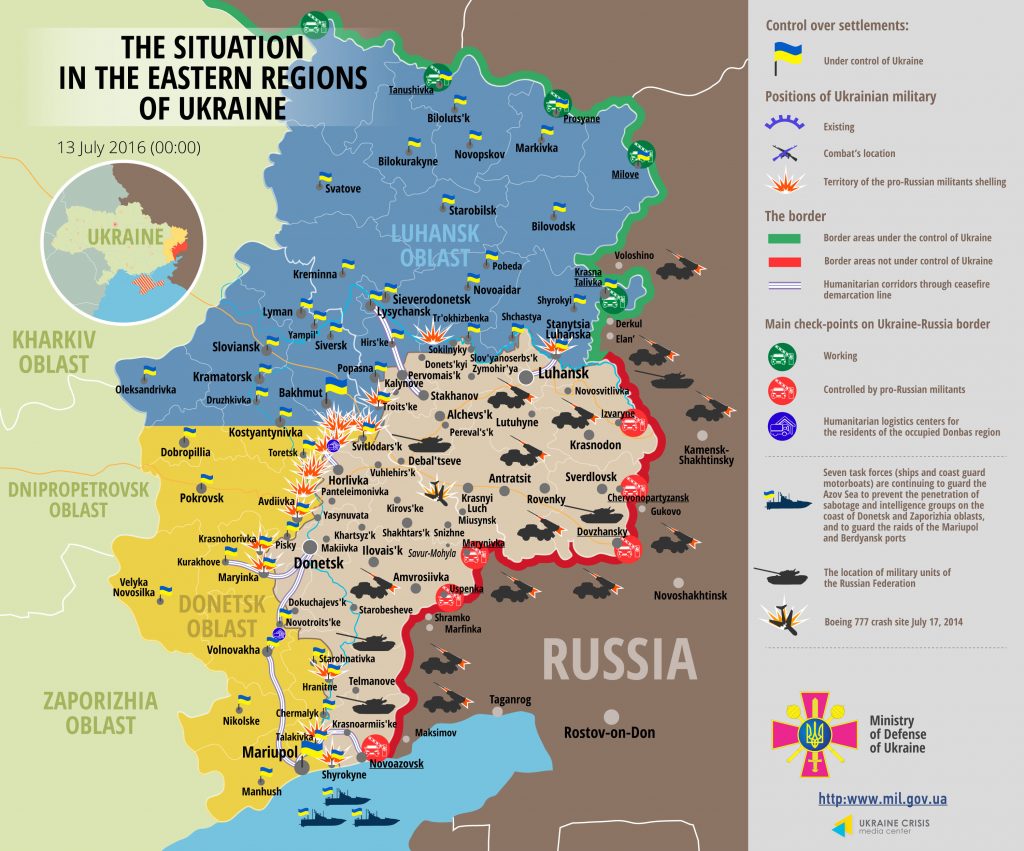 After the midnight and until the sunrise militants based in Holmivske repeatedly shelled ATO troops who stand on the defensive north of their positions. Militants used mortar launchers and 122-mm cannons. Militant snipers were shooting at the Svitlodarsk bulge near Luhanske settlement, and Russia-backed militant groups conducted brief attack there late at night, shooting at ATO troops from armored personnel carriers (APC) and automatic grenade launchers. “In total, 19 hostile attacks took place in the Donetsk sector in the past 24 hours,” added the spokesman.

Militant combat activity decreased in the Luhansk sector. Absolute armistice held in Popasna district. Militants shot at ATO troops’ positions early in the morning and late at night in Stanytsia Luhanska, using APCs and grenade launchers in the first case. Moreover, two brief armed provocations were instigated by militants north of the Bakhmut road, near Krymske village in Novoaidar district. In total, four ceasefire violations were registered in the Luhansk sector yesterday.

Russian mercenaries shot from grenade launchers and mortar launchers near the Azov Sea, in Hnutove. “The situation in Shyrokyne remains restless: the enemy is shelling ATO troops, not using heavy armor,” added the spokesman.

Militants used unmanned aerial vehicles in the Donetsk sector. “It must be mentioned that the enemy is conducting reconnaissance not only in the frontline, but in tactical defense line of the ATO troops,” elaborated Col. Lysenko.

According to the Chief Intelligence Directorate of the Ministry of Defense of Ukraine, new supplies came for militants from Russia. Six fuel tanks with combustible and lubrication materials, six fuel servicing units and four railroad cars carrying spare parts for weapons and military equipment arrived at Rovenky station. 20 fuelling vehicles with combustible and lubrication materials came to the oil depot in Luhansk.

Moreover, military intelligence reported that officers of the Armed Forces of the Russian Federation from the Center of Informational Confrontation (Novocherkask) are responsible for the propaganda production for the temporarily occupied territories, they prepare fictitious video materials aimed at discrediting the ATO troops together with journalists of Russian TV-channel Lifenews. For instance, it was planned to accuse Ukrainian troops with using so-called “phosphorous ammunition”.