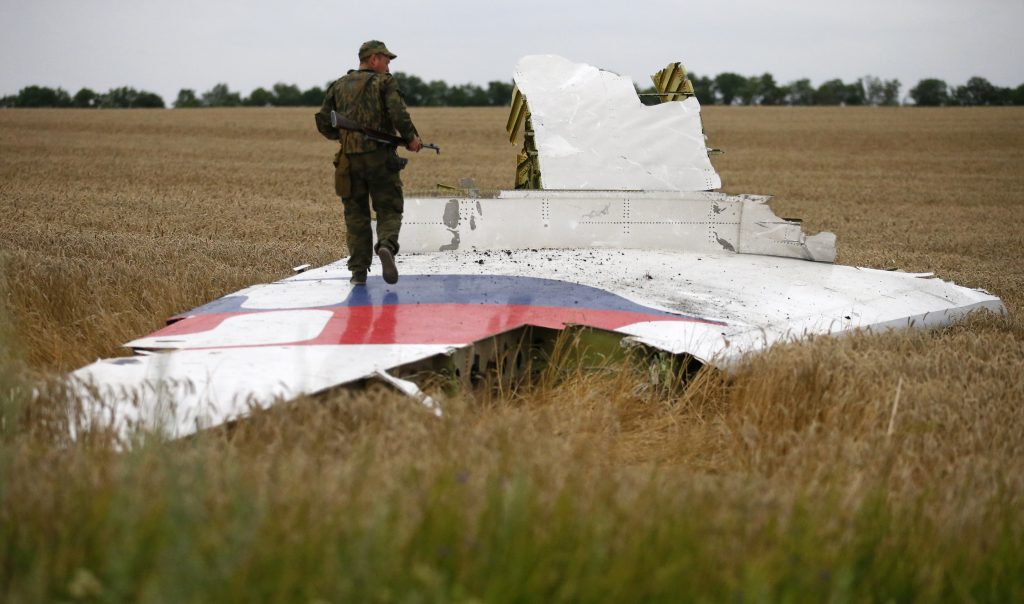 An armed pro-Russian separatist stands on part of the wreckage of the Malaysia Airlines Boeing 777 plane after it crashed near the settlement of Grabovo in the Donetsk region, July 17, 2014. The Malaysian airliner flight MH17 was brought down over eastern Ukraine on Thursday, killing all 295 people aboard and sharply raising stakes in a conflict between Kiev and pro-Moscow rebels in which Russia and the West back opposing sides. REUTERS/Maxim Zmeyev (UKRAINE - Tags: TRANSPORT DISASTER POLITICS CIVIL UNREST TPX IMAGES OF THE DAY) - RTR3Z3JK

July 17 marks the second anniversary of MH17 tragedy. By the number of victims (298, including 15 crew members), the plane crash was the largest in the history of Ukraine. The event remains one of the most painful chapters of the Russian-Ukrainian war.

During the first month after the crash, UCMC was the official press center providing information about the tragedy. Most employees will remember this time forever: round-the-clock work on providing information, briefings and releases in a Ukrainian, Russian and English languages, contact with relatives and comprehensive assistance to foreign journalists.

On the occasion of the second anniversary of the tragedy, UCMC has prepared an analytical document containing a timeline of major events, information about the main achievements of investigation and expectations of the future development of investigation.

July 17, 2014, 13:20 (UTC) – Malaysia Airlines scheduled passenger flight from Amsterdam to Kuala Lumpur was shot down over the territory of Donetsk region. 298 people were killed, including 15 crew members.

July 17, 2014 – Ukraine starts negotiating access to the crash site with the searching and transporting bodies from the crash site, as it was and still is under control of the Russia-backed militants

October 8, 2015 – Bellingcat publishes a report on the downing of Flight MH17. The report presents the findings of investigations conducted by Bellingcat and other organizations about the origin of the Buk missile launcher. The investigations are built on the open information sources. Text of the report available here.

October 13, 2015 – Dutch Safety Board publishes a technical report of the international investigation team about the crash.

Immediately after the crash, Ukrainian government accuses the separatists, currently occupying territories in East Ukraine, and Russia of the catastrophe. According to Ukraine, the airliner was downed by Buk anti-aircraft missile system. On July 18, the Security Service of Ukraine published the intercepted conversation record, where terrorists admit their downing the Boeing.

The Government established a special Commission to investigate Boeing-777 crash. The objectives  of the Commission were transport the dead bodies from the crash site, provide continued access for specialists and international experts to the crash site for an open, transparent and comprehensive investigation and clarify all details of the crash.

The State Service for Emergency Situations of Ukraine jointly with the OSCE Special Monitoring Mission (SMM) observers provided the opportunity to transport the bodies in special railway carriages-refrigerators and send them for further expertise.

On July 23, 2014  Ukraine decided to hand over the investigation to the Dutch side in order to ensure its impartiality and objectivity.

From the next day after the tragedy, July 18, 2014, Ukraine Crisis Media Center (UCMC) served as the Official Government Press Center for Malaysia Airlines Flight MH17 tragedy. Two media platforms worked on a daily basis – in Kyiv and later in Kharkiv; the Center hotlines for foreign media worked 24 hours a day.

Relatives of the victims phoned to learn how to get to Ukraine, how to get in touch with security agencies involved in the investigation; they were interested in the details of identification procedures. Kharkiv hosted the Anti-crisis Centre to support victims’ families and international media received access to the airfield here. Later, the remains of those killed in the crash were sent to the Netherlands from this place.

Head of the state commission on investigating the causes of Malaysia Airlines Flight MH17 crash Volodymyr Groisman, the current Prime Minister of Ukraine, reported in the press center in Kyiv daily. Among the foreign speakers who communicated with the media at UCMC were Julie Bishop, Minister of Foreign Affairs of Australia, and Pieter-Jaap Aalbersberg, Head of the Dutch recovery mission.

Versions of the self proclaimed “DPR”

The first information in Russian about the downed plane appeared on Russian social media site “VKontakte”. The following post was published on one a separatists’ official profile “Reports from Strelkov (Girkin) Igor Ivanovich”: “In the vicinity of Torez, we just downed a plane, an AN-26. It is lying somewhere behind the coal mine “Progress”. We warned you not to fly over our skies.” We have video confirming the “birdiefall”. The bird fell behind a waste heap. Residential areas were not hit. Civilians were not injured.”

When it turned out that the plane was not Ukrainian, and “civilians” – citizens of the Netherlands, Malaysia, Australia and other countries were killed, the post in the “Reports” was immediately deleted.

In addition, a few days before the tragedy, residents of the occupied Torez and Snizhne shared online photos  and videos  of Buk anti-aircraft missile system seen in these towns.

Russian propaganda immediately seized on the allegation against the Ukrainian army.

Ukrainians shot down “Boeing” by mistake, and actually they fired at Russian President Vladimir Putin’s aircraft or at the Russian Airlines “Aeroflot” aircraft that was flying from Milan to Moscow. They presented photoshopped “pictures” of the Boeing and the Ukrainian aircraft flying alongside of it.

It was Ukrainian, not Russian “Buk” missile launcher

The Boeing crash was caused by a surface-to-air missile strike. However, it was a Ukrainian “Buk” missile launcher, not Russian. Russian national defense holding “Almaz-Antey”, manufacturing “Buk” missiles, conducted a special experiment blowing up a decommissioned aircraft. A few days later the Bellingcat team made an examination proving that the photos have been digitally edited.

3. Explosion from within the aircraft

Before the UN meeting to vote on a draft resolution to establish a tribunal on the Boeing crash in Donbas, Russia began to actively propagate the story that the plane had been blown up from within. A plan to destroy the aircraft, of course, was developed by the CIA, as proven by the tape recorded conversation between two “CIA agents”, who speak in turns with the British, American, and Russian accents.

4.The aircraft with corpses

The most fantastic version proposed by the Russian party and published in the above-mentioned “Reports from Girkin (Strelkov)” is that passengers of the downed “Boeing” were already dead. The author of “Reports” refers to the “traces of decomposition” on “stale” corpses, which appeared to be “bloodless”. According to some Russian journalists, “experts” and bloggers, it could be the dead bodies of passengers of another Malaysian “Boeing”, which fell down in the southern part of the Indian Ocean in March 2014. They were raised from the bottom of the ocean specially for blaming separatists for the murder of civilians.

– The “Buk” missile launcher that hit the plane was convoyed by Russian military. The crew consisted of four people. The Bellingcat experts found out the names of two of them: Dmytro Z. and Volodymyr P.

– On the night of July 17, the same “Buk” was moved to Ukraine. Immediately after the tragedy, the early morning of July 18 the vehicle carrying “Buk” crossed the border of Russia.

– On July 19-21, “Buk” was moved to a military camp in the northwest of Kamensk-Shakhtinskiy in Rostov region, Russia. Then the missile system was removed to the unknown location.

– The ID number of “Buk” is 332. It belongs to the Russian 53rd Anti-Aircraft Missile Brigade based near Kursk.

The investigation revealed that the nature of damages clearly indicates the missile specific model – 9N314M. It was concluded that the missile that hit the Boeing 777 over Torez in Donetsk region had been launched from the territory within a radius of 320 km in the east of Ukraine. It exploded a few meters away from the left side of the cockpit.

The investigation ruled out the version that the Boeing 777 Flight MH17 was attacked from the air (there was no military aircrafts within a 30 km radius).

The report also noted that the Ukrainian government underestimated the risks to civil aviation in the summer of 2015. Although there were some reports on downing a military aircraft at the altitude of 6000-6500 meters, the measures taken by Ukraine, i.e. civilian aircraft flew at altitude of 9.7 km, failed to fully protect civil aviation.

The main argument was that under the Chicago Convention on International Civil Aviation, a state is responsible for the safety of its airspace.

Simultaneously, the Netherlands conduct a criminal investigation. The international investigation team includes representatives of prosecutor’s offices and police of the Netherlands, Australia, Malaysia, Belgium and Ukraine. The investigators stress that they have to determine type of weapon used, who used it, where the launch was made, how the plane was destroyed, and whether it was destroyed by accident or intentionally. This report is due in October 2016.