Kyiv, July 18, 2016. The most intense hostilities in the ATO zone took place in the Donetsk sector where militants shelled ATO troop positions 40 times in 24 hours. They used mortar launchers 16 times. “The fiercest fighting continues in the Avdiivka industrial area virtually 24/7. The enemy began heavy mortar fire at night and lasting for about five hours. Residential quarters came under fire yet again. Two buildings were damaged and a local inhabitant was wounded,” informed the spokesman of the Presidential Administration on ATO related issues Colonel Andriy Lysenko at a press briefing at Ukraine Crisis Media Center. 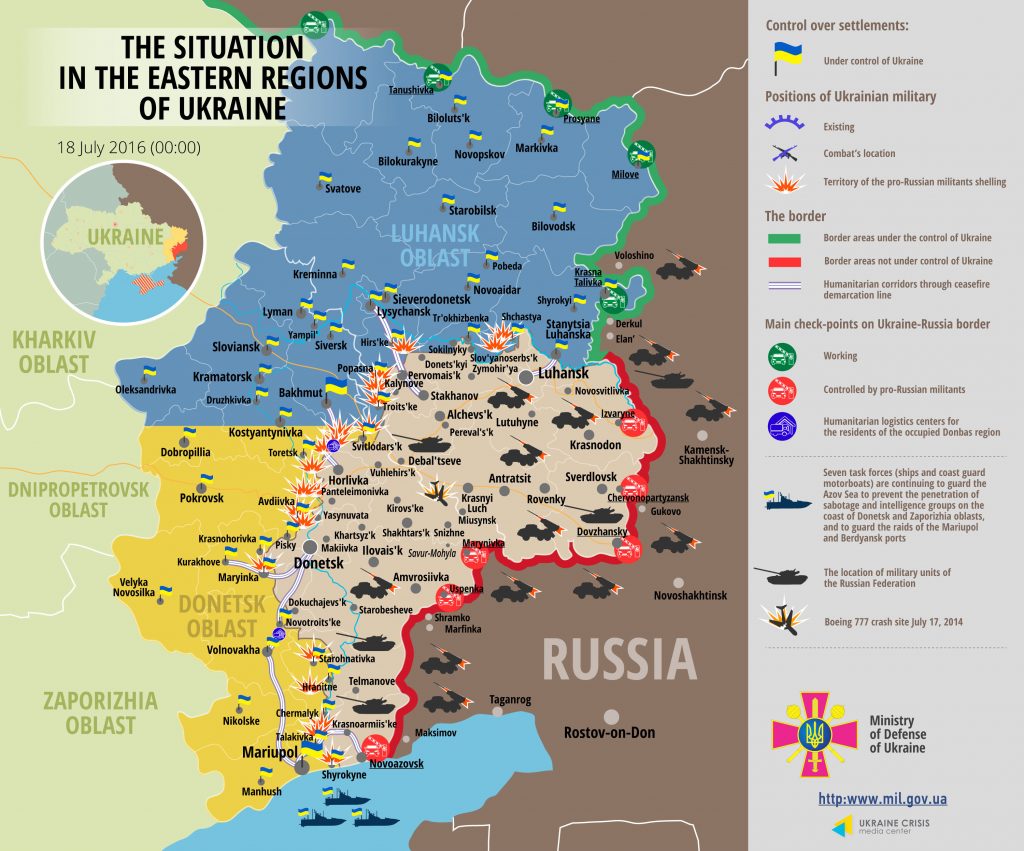 Moreover, intense firefights continued near Zaitseve where Russia-backed militants were shooting almost non-stop. “It should be pointed out that the adversary is shooting from two directions at once – from the south and from the east. Heavy armor – 82mm mortar launchers – is deployed at both positions held by militants,” said Col. Lysenko.  Provocations took place in other positions on the outskirts of Horlivka – in Novhorodske and Varkhniotoretske as well as at the Svitlodarsk bulge and Butovka coal mine position. The armistice held in Opytne and Pisky yesterday.

Militants attacked seven times in 24 hours in the Luhansk sector, three incidents involved the use of mortar launchers. Insurgents shelled Ukrainian troop positions near Staryi Aidar and the outskirts, Orikhove in the Bakhmut road and in the vicinity of Popasna. Almost all the attacks took place during the hours of darkness.

In the Mariupol sector, Russian proxies conducted 17 attacks yesterday, including seven mortar attacks and three cases of sniping fire. “The vicinity of Starohnativka and Shyrokyne are the central flashpoints. Hostile snipers were active in Mariinka yesterday. Moreover, militants used a armored personnel carrier. A local inhabitant sustained a fragmentation injury yesterday. The woman was taken to the hospital in Kurakhove,” said the spokesman. He added that five buildings were damaged in Mariinka for the last three days.

One Ukrainian serviceman died in combat yesterday and five were wounded. Three militants were killed from the self-proclaimed 11th regiment (Makiivka), 9th regiment (Novoazovsk and 3rd brigade (Horlivka) and seven were injured. Militant subdivisions engaged in hostilities in the Avdiivka industrial area incurred the biggest losses. “According to the military intelligence, it is the reason why a Russian National guard unit arrived at Avdiivka industrial area. It is planned they will act as a retreat-blocking detachment,” said Col. Lysenko.

The spokesman also informed that militants from so-called 1st brigade broke up spontaneous rally of civilians in one of the near-front towns on the temporarily occupied territory. People walked out protesting against deploying firing positions of militant artillery detachments in residential quarters of the town. “During this brutal action insurgents heavily wounded three civilians using fire arms. In order to prevent further civil unrest and cover up this tragedy, the enemy’s command broadcasted gossip that it was a militant suffering from mental disorder who shot at local inhabitants. They said he had left the ranks of Russia-backed militant groups long time ago,” elaborated the spokesman.