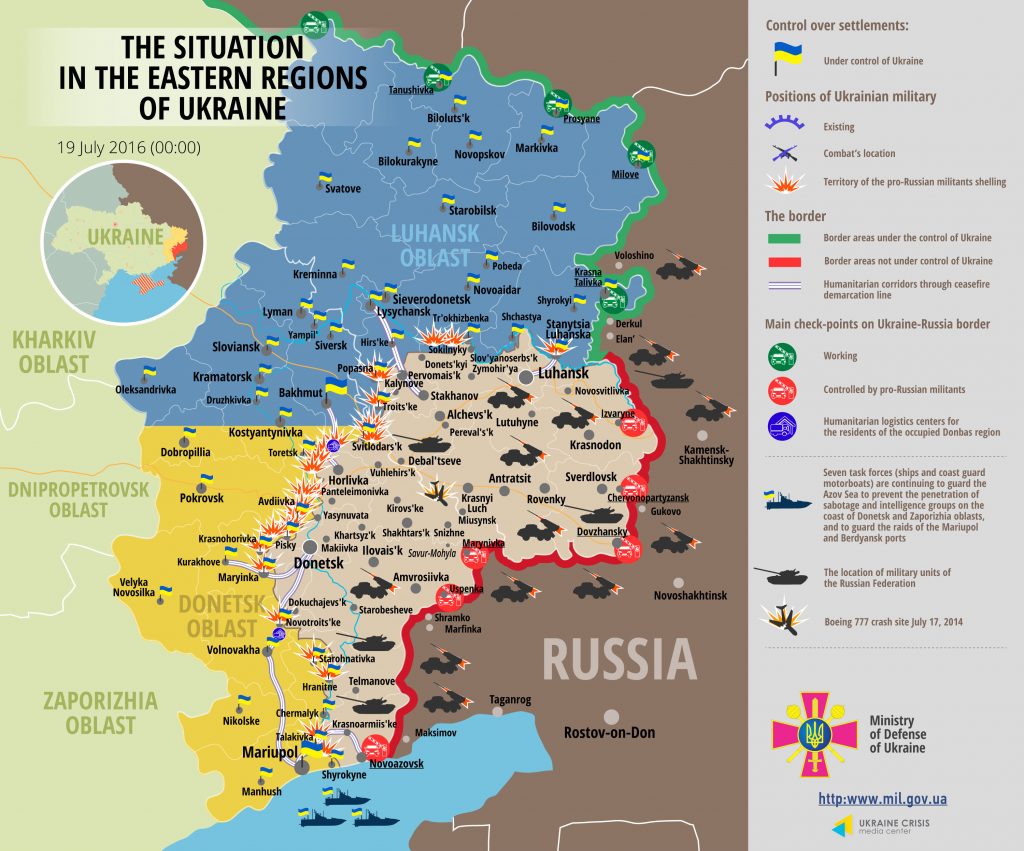 The vicinity of Popasna, Krymske village north of the Bakhmut road and Stanytsia Luhanska remain the central flashpoints in the Luhansk sector. “Adversaries use heavy mortar launchers, grenade launchers and large machine guns in these defense lines. At the same time, 7 out of 13 hostile attacks at Ukrainian positions were unaimed, provoking Ukrainian troops to respond with fire,” said Col. Lysenko. All the attacks, excluding one-hour firefight in Krymske took place during the hours of darkness. On the average, each attack lasted at least 30 minutes, some of them as long as two hours, like in Stanytsia Luhanska yesterday, where Russia-backed militant groups shelled ATO troops from mortar launchers, grenade launchers of various systems and small arms from the high bank of the Siverskyi Donets river.

In the Donetsk sector the situation was the most restless on the north outskirts of the temporarily occupied Horlivka. “In total, hostile attacks at Ukrainian positions on Zaitseve-Maiorsk frontline continued over eight hours. Militants shot both from heavy and light weapons during the hours of darkness and at night,” said the spokesman. Checkpoint of the State Border Service of Ukraine at the entrance to Horlivka came under militants’ fire.

Militant activity slightly reduced in the vicinity of Avdiivka industrial area as compared to the previous days.

Militants became active at the Svitlodarsk bulge at night, shelling Ukrainian troops near Luhanske settlement. Moreover, militants used artillery against ATO troops which stand on the defensive in adjacent settlement of Myronivskyi, launching over 20 missiles at their positions. “It has been found that the adversaries’ 122-mm howitzers were deployed in the vicinity of
Kalynove settlement, south outskirts of which are located 15 km from the place of artillery attack,” added Col. Lysenko.

According to the information of the Chief Intelligence Directorate of the Ministry of Defense of Ukraine (CID MDU), militants’ electronic warfare activity was registered. Militants’ subdivision was using the newest Russian EW equipment R-330 “Zhytel” and mobile radio monitoring system “Svet-KU”.

Militant attacks resumed near Donetsk airport after brief breathing spell of the last days. “The enemy opened fire from mortar launchers and artillery only during the hours of darkness, launching 30 mortar shell and eight artillery missiles at our troops,” said Col. Lysenko. In total, 43 militant attacks took place in the Donetsk sector; one third of them involved use of heavy armor.

Militants violated the armistice 22 times in the Mariupol sector, 15 cases of ceasefire violations took place in Mariinka and Krasnohorivka. “Occupying troops were using heavy mortar launchers during the hours of darkness in these adjacent towns, launching 70 mortar shells at Ukrainian positions. They used small arms, namely sniping weapons during the day,” said the spokesman. Militants also instigated armed provocation in Novotroitske, Starohnativka, Hranitne and Hnutove in the Mariupol sector.