Russia is supplying militants with ammunition, heavy armor and manpower. Attacks continue in all the sectors of the ATO zone and continue electronic warfare. Local inhabitants in Luhansk region protest against militant crimes.

Kyiv, July 21, 2016. Militants received another batch of reinforcements from Russia. According to the Chief Intelligence Directorate of the Ministry of Defense of Ukraine, 23 trucks came to Krasnodon to stock a fleet militant trucks. Three wagonloads of ammunition and buses carrying manpower – up to 200 people – arrived at Sverdlovsk station. “Moreover, six self-propelled artillery mounts Gvozdika came to Makiivka for the service of the 11th motorized rifle regiment of the Russian occupation force after capital repair. These are the militants’ favourite type of heavy weapons to shoot at Ukrainian forward positions along the entire frontline,” informed the spokesman of the Presidential Administration on ATO related issues Colonel Andriy Lysenko at a press briefing at Ukraine Crisis Media Center. 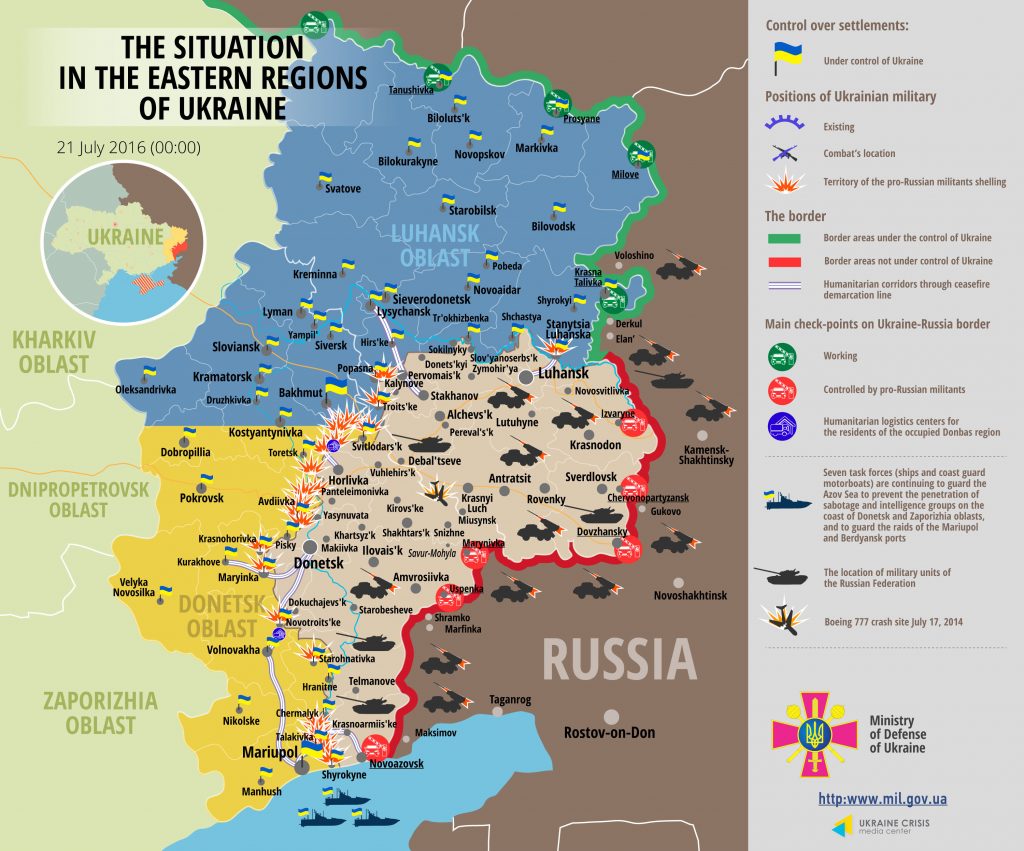 Militants violated the ceasefire in two spots in the Luhansk sector: in Stanytsia Luhanska and Novooleksandrivka. “The situation was restless only during the hours of darkness: between 2:00 and 2:30 p.m. and between 10:00 p.m. and midnight. Militants used no heavy armor. In total, six hostile attacks took place in the past 24 hours,” said the spokesman.

The day on the forefront in the Donetsk sector started when militants’ fired a barrage of artillery and mortars. 122-mm cannons, 120-mm and 82-mm mortar launchers were used in the vicinity of Zaitseve and its outskirts, as well as Avdiivka between the midnight and 4 a.m. “As a result of these barbarous attacks in Avdiivka private buildings were damaged again and water and electricity supply was cut off,” said Col. Lysenko. Armistice fully held in the frontline between 6 a.m. and 12 a.m. “Two more militant attacks took place in Avdiivka industrial area in the daytime. The attack was conducted from the south (Yasynuvata). Later, at night, combat activity became more intense. Russian occupation troops conducted several mortar attacks yet again on the abovementioned defense lines and in Troitske (Svotlodarsk bulge),” added the spokesman. Moreover, militants were active in Luhanske, Novhorodske-Yasynuvata frontline and Butovka coal mine. The ceasefire held in Opytne and Pisky.

Ukrainian military intelligence informs that a subdivision of Russian snipers arrived in the vicinity of Svitlodarsk – 12 servicemen with the newest 12.7 sniping rifles. In total, 33 militant attacks took place in the Donetsk sector, 19 of these involved use of heavy armor.

There are no areas in the Mariupol sector where the armistice held. Militants are actively shelling Ukrainian positions along the entire frontline, both during the day and at night. Insurgents used 122-mm cannons three times in the vicinity of Talakivka and Vodiane, launching 40 missiles. Russia-backed militant groups conducted massive attacks from mortar launchers in Krasnohorivka and in Talakivka-Shyrokyne frontline area. “Density of fire from militant heavy armor is extremely high. Moreover, a number of firefights between ATO troops and the adversary took place in Mariinka and Starohnativka,” informed Col. Lysenko. According to the intelligence, militants are using mobile loudspeaker units ZS-88 on BTR-80 base, imitating sounds of heavy armor movement, in order to deceive ATO troops. In total, militants conducted 31 attacks in the Mariupol sector yesterday, including three artillery and 11 mortar attacks.

Ukrainian Armed Forces incurred no losses in the past 24 hours, five troops were wounded.

Alchevsk and Stakhanov inhabitants from the temporarily occupied part of the Luhansk region conducted a spontaneous rally yesterday, protesting against numerous facts of looting; violence and robbery conducted by Russian occupation troops. Inhabitants’ indignation was caused by another heinous crime – attempted robbery and rape of an elderly woman by newly arrived militants. These villains were Russian citizens – a 30-year-old Vitaliy Baiiev and a militant Navierkhov,” said the spokesman.