Russian Defense Minister pays a visit to check on military infrastructure in Crimea, while militants continue violating the Minsk agreements in the area of the armed conflict in the East Ukraine.

Kyiv, July 29, 2016. Military and political leadership of Russia pays special attention to developing military infrastructure in the temporarily occupied Crimea. Russian Defense Minister Sergei Shoigu personally inspected the progress of infrastructure improvements when traveling to the peninsula. In June, he visited the stations for warning of missile attacks in Sevastopol and the spacecraft control center near Yevpatoria. During his last visit on July 23, Shoigu inspected the progress of rehabilitation and modernization of infrastructure in the airfields Kirovske, Hvardiyske, Saki and a shooting range near Cape Opuk. This was stated by Vadym Skybytskyi, Ministry of Defense of Ukraine, Chief Intelligence Department, at a briefing held at Ukraine Crisis Media Center. “On July 27, at a meeting of the Russian Defense Ministry Shoigu focused on the deployment of self-contained force grouping in Crimea, supplying the Russian Armed Forces with new combat aircraft, anti-aircraft missile systems S-400, submarines “Varshavyanka” and small missile ships equipped with a missile system “Caliber” and setting coastal defense systems “Bal” and “Bastion to combat alert,” explained Mr. Skybytskyi.

At the same time, according to intelligence, militants continue to hold weapons prohibited by the Minsk agreements on the temporarily occupied territories. These are at least 20 tanks, 7 mortars, over 100 pieces of artillery systems and self-propelled artillery platforms, 19 units of 122-mm Grad systems. However, the intensity of militants’ attacks decreased in Slovyansk and Donetsk sectors. “Among other things, this is due to the fact that the OSCE Special Monitoring Mission (SMM) representatives concentrated their work in these areas,” stressed Mr. Skybytskyi. According to him, over the week militants carried out 389 attacks and assault operations. Last week the figure was 474. Military intelligence found out that the positions of ATO forces are shelled targetedly. Personnel are forbidden to open fire while the OSCE SMM is within ​​their monitoring area. Thus, during the week, the ceasefire lasted in the areas of activity of the so-called “separate 3rd motorized rifle brigade of the 1st Army Corps (AC)” of militants stationed in Horlivka and the so-called “separate 6th motorized rifle brigade” of the 2nd AC” stationed in Stakhanov while the Mission waked there,” informed Vadym Skybytskyi.

Besides, militants continue to conduct reconnaissance using the latest technical reconnaissance equipment made in Russia. Over the current week 22 flights of surveillance drones were recorded in the area of armed conflict. “In Mariupol sector, multifunctional electronic warfare and intelligence complexes MKTK-1A “Dzyudoist” that are only in arsenal of the RF Armed Forces were transferred from Russia to Bezimenne. The enemy also actively uses electronic warfare complexes ‘Shipovnik-Aero’ and P-330 ‘Zhitel’,” noted the military intelligence representative.

Besides, the enemy sabotage and reconnaissance groups are used extensively near Avdiyivka and Maryinka.

The Defence Intelligence of Ukraine identified the personnel of a sniper platoon of “separate 5th motorized rifle brigade” of the 1st AC. “the personnel deliver sniping fire for effect near Maryinka, Slavne, Berezove, Novotroitske, Novohnativka and Yasne. They fire both at the Ukrainian military and the civilians. The personnel are also engaged in provocative firing at the OSCE SMM monitors when they are on the territory controlled by the Ukrainian millitary,” informed Mr. Skybytskyi.

The list of the above-mentioned personnel is shown in the slide in Ukrainian: 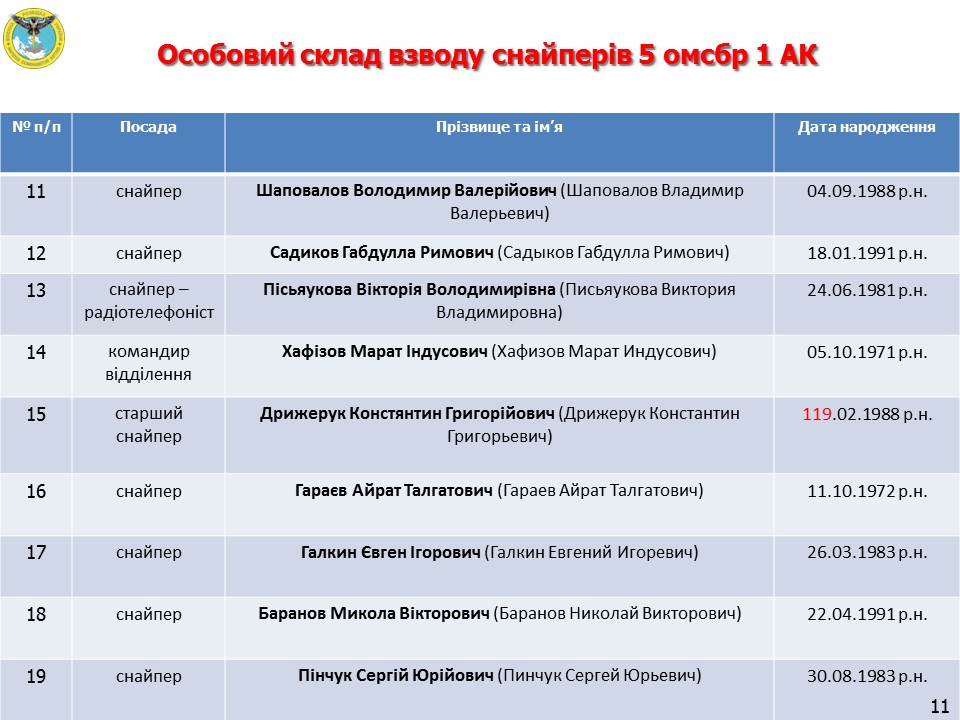 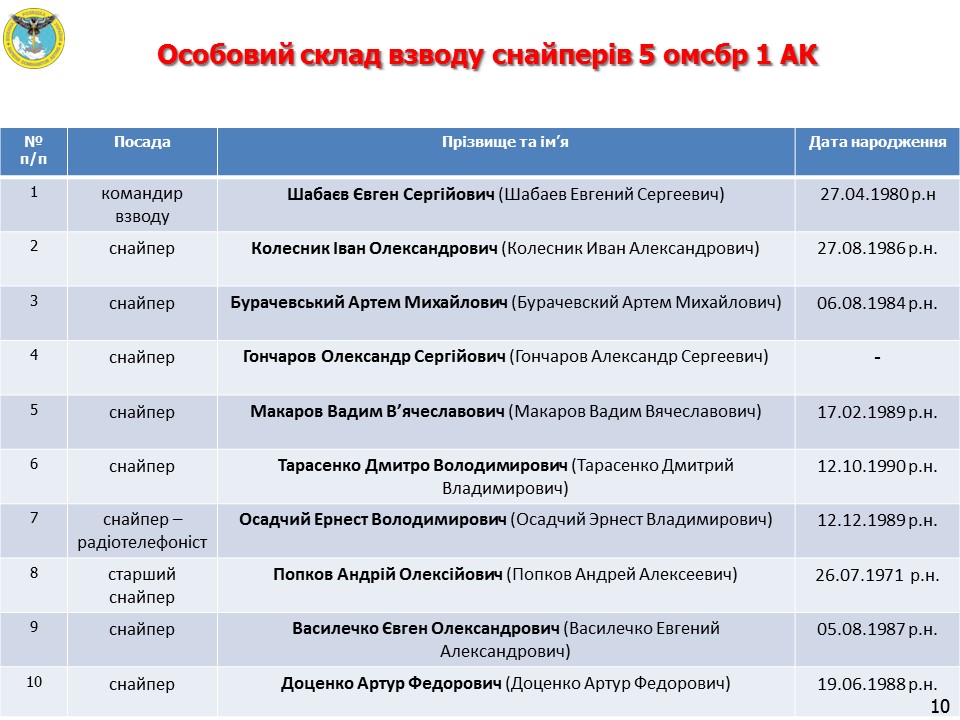