The area of hostilities in the Luhansk sector expands considerably. Militants fight intensely in Avdiivka industrial area and use UAVs there. In the Mariupol sector mostly mortars are used.

Kyiv, August 3, 2016. Militants launched over 400 mortar shells and 34 artillery missiles in the Donetsk sector in the ATO zone. “Considering an extremely complicated situation in the other sector, this is a record high number in the last several months,” said the spokesman of the Presidential Administration on ATO related issues Colonel Andriy Lysenko at a press briefing at Ukraine Crisis Media Center. According to him, the most intense attacks took place in the Avdiivka industrial area where Russia-backed militants were shooting the entire day almost non-stop. Moreover, Zaitseve and Pisky came under fire too. The attack was conducted from large distance and from Horlivka and Donetsk residential quarters. “Massive attacks at Ukrainian positions took place at the Svitlodarsk bulge and along the entire perimeter of the Donetsk airport,” elaborated the spokesman. Moreover, two flights of hostile unmanned aerial vehicles (UAV) took place in the Donetsk sector yesterday. 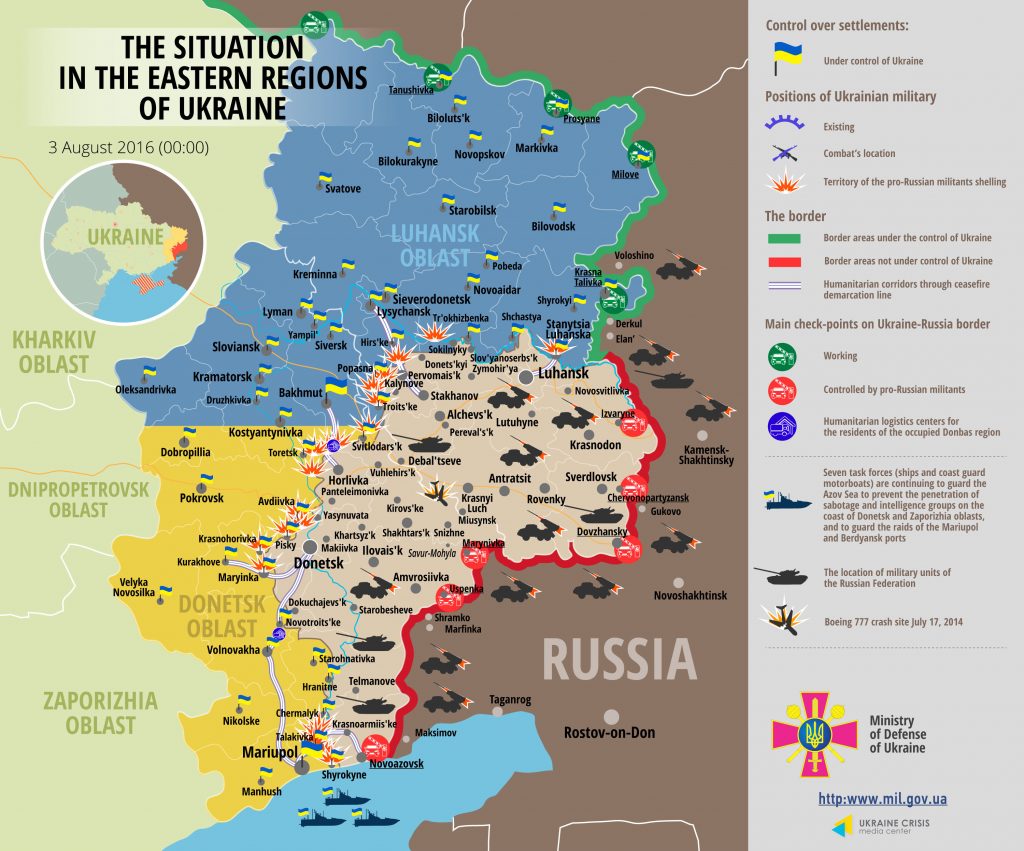 Ukrainian Armed Forces incurred no losses in combat in the last 24 hours. Three troops were wounded and one sustained a blast injury as a result of mortar attack.

The spokesman emphasized that the geography of hostilities in the Luhansk sector expanded. Militants violated the ceasefire in Stanytsia Luhanska, Krymske, Zolote and near Popasna during the hours of darkness, between 1 and 4 a.m. and between 7 and 8 p.m. “The occupants conducted a number of potent mortar attacks at our positions. According to the headquarters’ estimates, occupants launched almost 100 mortar shells near Krymske and Popasna,” said Col. Lysenko. In total, 15 hostile attacks took place in the Luhansk sector yesterday, and six of these involved use of heavy armor.

According to Col. Lysenko, in the Mariupol sector the situation was restless in two frontline areas: Krasnohorivka – Mariinka and Hnutove – Shyrokyne. Militants violated the armistice in these areas both during the day and at night. The beginning of the day was especially restless, as militants actively used heavy armor – mortar launchers and a tank.

Col. Lysenko added that one militant died yesterday and three were injured. These are militants from so-called “3rd brigade” located in Horlivka.