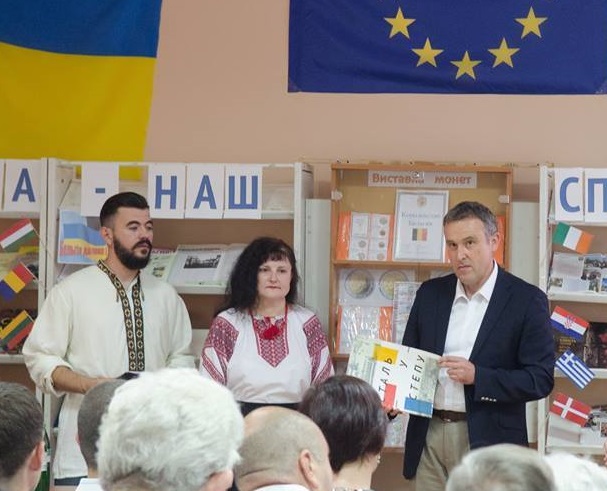 Over a hundred years ago, at the end of the XIX – at the beginning of the XX century, in the territory of present-day Kostyantynivka in Donetsk region there were five operational plants founded by Belgian entrepreneurs. On July 25, 2016 the exhibition entitled “Foreign investment in Ukraine at the end of the XIX century – beginning of the XX century. Part one: Belgium” opened in the city. Through a series of archival photos and documents the exhibition narrates the common pages of the Ukrainian-Belgian history. During the event, Ambassador of Belgium to Ukraine Luc Jacobs paid a visit to Kostyantynivka. UCMC is looking at how this exhibition on the common past of the two countries catalyzes Ukrainian-Belgian relations today.

The historic exhibition on Belgian investment in Ukrainian industry at the turn of the century is being displayed on the first floor of Kostyantynivka’s City Palace of Culture. It comprises a series of placards displaying shares and bonds of Belgian companies who were active during that era in present-day Ukraine, as well as archive documents, photos of the plants, the laborers and their routines.

The exhibition is based on the collection of Ukrainian patron of arts Dmytro Pirkl that the collector has passed to the Dmytro Yavornytsky national historic museum in Dnipro. The exhibition “Foreign investment in Ukraine at the end of XIX century – beginning of XX century. Part one: Belgium” and its tour through the eastern cities is organized by Ukraine Crisis Media Center (UCMC) with the support of the Embassy of Belgium in Ukraine and of two Belgian companies: SESVanderHave and Hlyny Donbasu.

Belgian companies founded and invested in these enterprises in present-day Dnipropetrovsk, Zaporizhzhia, Donetsk, Luhansk and Odesa regions of Ukraine. Over 80 Belgian industrial enterprises were operational in this area at the turn of the century. As Soviet authorities acceded to power the plants were nationalized. At the present moment most of the enterprises that are operational are privately owned. On the territory of present-day Kostyantynivka, there were five plants founded by two Belgian companies; the plants are glassworks, chemical, glass bottle and mirror manufacturing plants, and a metal working plant. The first one – the glassworks was founded in 1895, currently it is only partially operational. Apart from the industrial sites present in the area, Belgian workers, engineers and plant managers lived and worked in the city.

“I have been travelling a lot and have heard about Ukrainian hospitality, but what I saw here really moved me,” said Ambassador of Belgium to Ukraine Luc Jacobs at the opening of the exhibition in Kostyantynivka as he thanked the local community and authorities for the cordial welcome – in his words, the warmest in the two years of his diplomatic service in Ukraine. “The exhibition opens the little-known pages of our common history to both Ukrainians and Belgians. We can learn from the example of our grandfathers who lived here over 100 years ago and were talking to each other,” the Ambassador said.

In course of his visit to the near-front city of the Donetsk region Ambassador Jacobs and his wife Anne Blontrock met with the city authorities. Not only the past but also the present and joint plans for the future were in focus of the meeting.  The diplomat spoke to the upcoming visit to Ukraine by the Belgian trade mission in September 2016. Secretary of the City Council Yuriy Razumny enthusiastically accepted the idea expressed by the Belgian Ambassador to present the projects that are currently awaiting investment in Kostyantynivka to the mission participants.

Following the opening of the exhibition, Ambassador Jacobs met with Kostyantynivka’s local community in the Central city library. Both historians and city residents interested in the history of their city shared the results of their research and spoke about the Belgian period of their city, illustrating their presentation with archive photos some of which were from old family photo albums. The Ambassador of Belgium claimed ready to provide comprehensive support to research initiatives of the common heritage with the cooperation of Belgian researchers. The city’s community also suggested establishing a cultural center in their town that would preserve the common Ukrainian-Belgian heritage.

Historians and city authorities organized a tour for Ambassador Jacobs, his wife and UCMC representatives across the city’s locales that housed Belgian heritage. The delegation visited the glassworks, former building of the administrative HQ of the glassworks, chemical and glass bottle manufacturing plants of the anonymous Belgian company “Donetsk glass and chemical plants,” a residential house of the director of the mirror manufacturing plant, a Belgian burial place on the territory of the Svyato-Uspensky Church as well as a restored house with a football pitch, originally built by Belgians and thought to be the first of a kind in Donetsk region.

“Foreign investment in Ukraine at the end of XIX century – beginning of XX century. Part one: Belgium” is on tour throughout cities and towns in eastern Ukraine. So far it has been on display in Lysychansk, Severodonetsk, Kramatorsk, Mariupol and Druzhkivka. On August 9 the exhibition will open in Sloviansk.