Military engagements between Ukrainian soldiers and militants occur across the frontlines in Mariupol and Donetsk, with some including the use of heavy weapons. In the Donbas region, more soldiers arrive from Russia.

Kyiv, August 8, 2016. The past day in the ATO zone began with a combat engagement between Ukrainian soldiers and the militants near Starohnativka, in the Mariupol sector. “Before dawn, the enemy started a massive attack on Ukrainian positions using heavy weapons. For instance, militants used mortars in Krasnohorivka, Mariinka and Vodyane; while near Pavlopil, they fired from artillery. The most intense was the 122-mm howitzers fire near Pavlopil. During 25 minutes, they fired 45 shells on our positions”, stated Colonel Oleksandr Motuzyanyk, Presidential Administration spokesperson on ATO related issues, at a briefing held at Ukraine Crisis Media Center. In the afternoon, the illegal armed groups undertook two mortar shellings in Krasnohorivka. The Ukrainian positions in Mariinka and Hnutove came under snipers’ fire. In total, there were 31 ceasefire violations in the Mariupol sector, including 7 from heavy weapons. 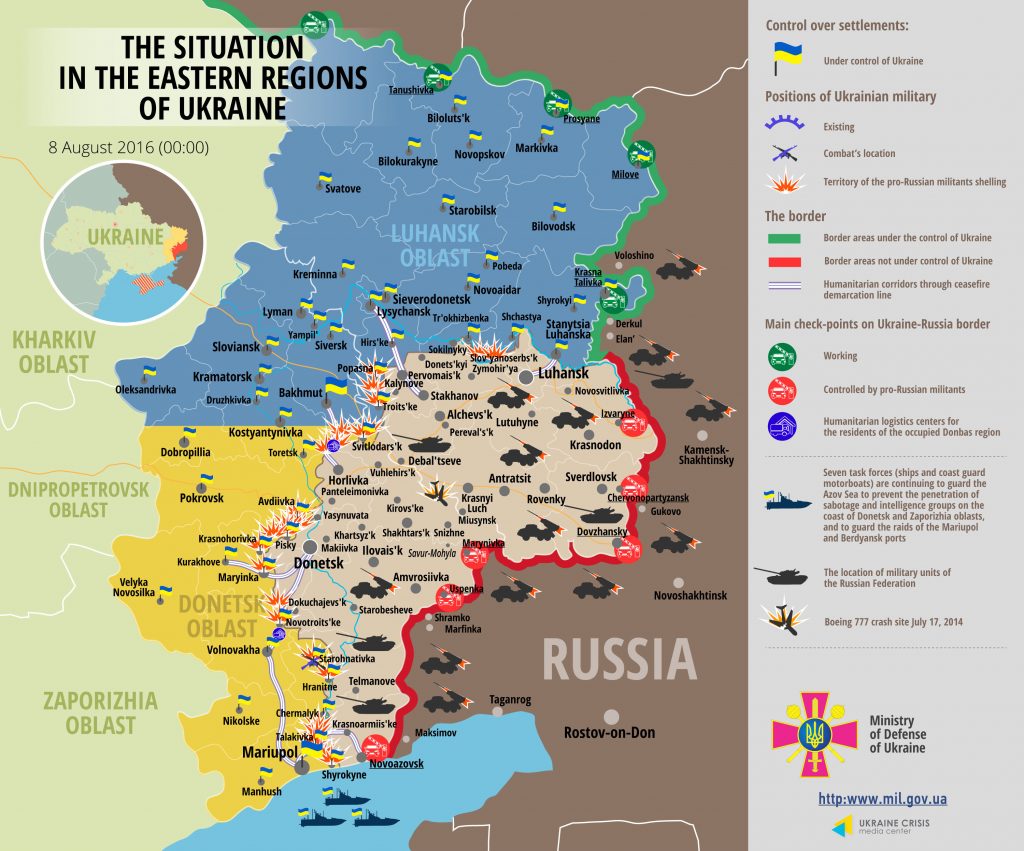 In the Donetsk sector, the militants intensified attacks from heavy weapons along all the frontlines using artillery and mortars. The most volatile are the areas of Svitlodarsk buldge, Zaitseve and its suburbs: Avdiivka’s industrial zone and the Donetsk airport. “According to the calculations of the Staff, the occupants fired on our positions with nearly 150 mortar shells and 20 artillery shells yesterday. In Zaitseve and Avdiivka, Ukrainian soldiers returned fire”, noted Oleksandr Motuzyanyk. He added that in the Luhansk sector the militants fired on Ukrainian positions to the southwest from Schastya and in the Popasna district.

Ukrainian Armed Forces did not suffer any lethal casualties over the past day, 11 servicemen were wounded during the hostilities.

Col. Motuzyanyk stated that 6 militants’ UAVs were seen in the ATO zone yesterday, one of them – in the Luhansk sector, three in the Donetsk sector, and two in the Mariupol sector.

According to Ukrainian intelligence, Russia continues strengthening the militants’ units in the temporarily occupied Donbas areas. “For instance, 70 people arrived from Russia to join the ranks of the so-called “9th regiment”, located in Novoazovsk. Also, 50 people more arrived to join the so-called “7th brigade” in Debaltseve”, said Col. Motuzyanyk.

Oleksandr Motuzyanyk also said that the first group of Ukrainian tactical medicine instructors finished the course based on NATO standards. “During three month, 19 future instructors passed through a difficult training on the base of the International Peacekeeping and Security Center at Hetman Petro Sahaidachnyi National Ground Forces Academy”, said the spokesman.