Kyiv, August 12, 2016. Highest number of militant attacks was registered in Mariupol sector: 21 in total, including six mortar attacks and one sniper attack. “Militant groups are actively using 82-mm and 120-mm mortars. Moreover hostile attacks restarted in the area of Dokuchayevsk,” said spokesman of Presidential Administration on ATO-related issues Oleksandr Motuzyanyk at a press-briefing at Ukraine Crisis Media Center. North of the above mentioned area, near Maryinka, the situation has slightly improved. The epicenter of combat actions has thus shifted to the Prymorsky area, between Pavlopil and Shyrokyne. Yesterday after midnight and till dawn Russia-backed militants were firing upon Ukrainian positions in Taramchuk. 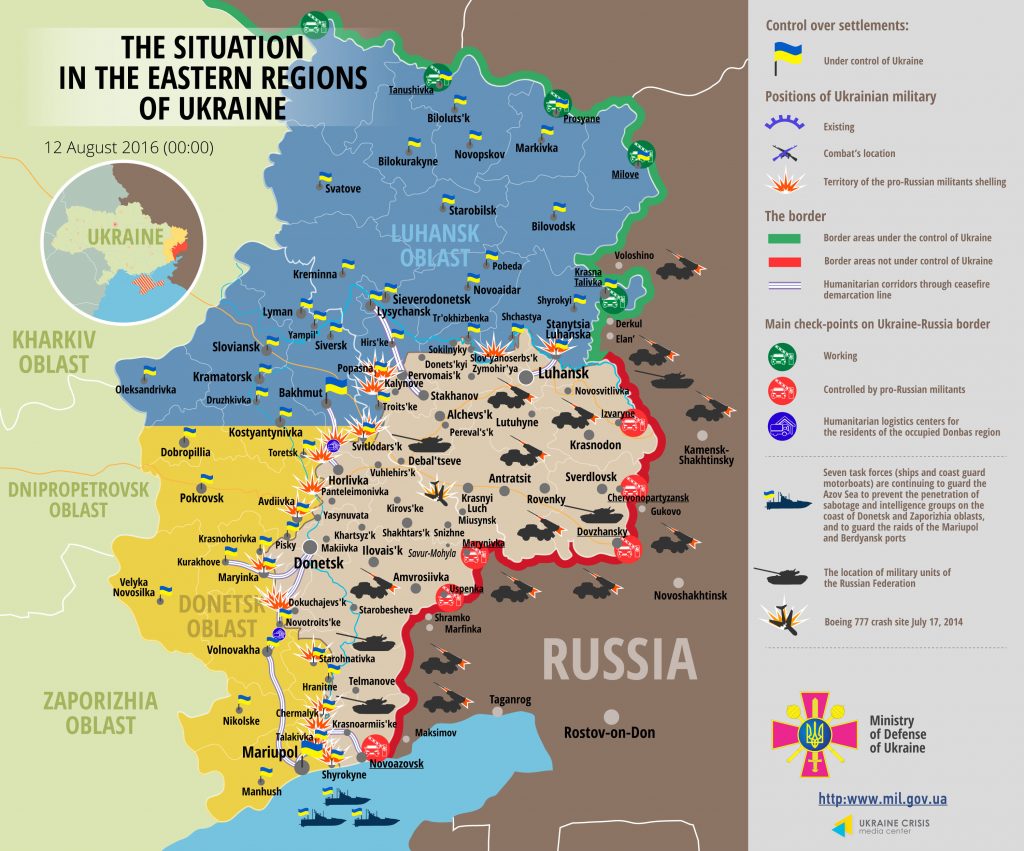 In the Luhansk sector militants were violating ceasefire only during the dark time of the day, mostly in the evening. “Hostile attacks upon Ukrainian positions took place in Stanytsia Luhanska, Zhovte (the area of Shchastia) and Popasnyansky area. Ukrainian troops returned fire twice. Militants used mortars twice near Popasna, having fired eight mines upon Ukrainian troops,” said Colonel Motuzyanyk. Militants made a total of six attacks in the Luhansk sector over the last day, one of them was with the use of heavy weapons.

Militant mortar attacks in the Donetsk sector took place yesterday at the Svitlodarsk salient and in Avdiivka’s industrial zone. Moreover militants violated ceasefire several times in Horlivka agglomeration and between Zaitseve – Verkhnyotoretske. Further to the south, in the area of the Donetsk airport, it was quiet yesterday. “Main combat actions on the contact line unfolded after 16 hours. In the course of mortar attacks, the adversary fired over 70 mines upon the positions of Ukrainian troops. There were two big fire exchange incidents between the ATO forces and militants. Each one lasted 40 minutes.  A total of 15 hostile attacks took place in the Donetsk sector over the last day, six of them were made with heavy weapons, two with sniper weapons,” noted the ATO spokesman.

One Ukrainian serviceman was killed in action over the last day and four were wounded in action. Militant losses include one killed and seven wounded. “Losses were incurred by the so-called ‘5th’ and ‘7th brigades’ as well as by the ‘9th regiment’ of the Russian-occupant troops,” added Colonel Motuzyanyk.

Yesterday militants organized three reconnaissance flights with the use of unmanned aerial vehicles (UAVs) – in the area of Almazna and Avdiivka, they also made the following route: Hlynka – Komsomolske – Starobesheve – Donetsk – Laryne – Starobesheve – Komsomolske – Pobeda. “We would like to point your attention to the fact that the third UAV was launched from the Russian territory,” noted ATO spokesman.