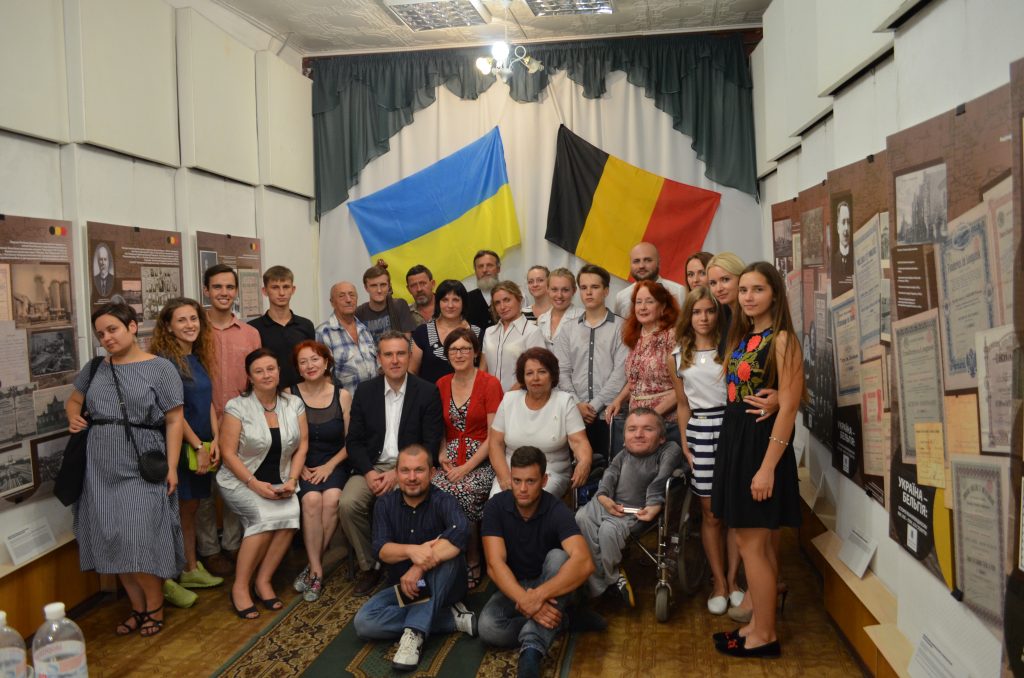 An exhibit tracing the history of Belgian investments in Eastern Ukraine opened in Slovyansk, Donetsk Oblast.  The exhibit follows the history of Belgian-Ukrainian relations through archived photos and documents from the 19th and 20th century.  In addition, the Belgian ambassador met with the Mayor Slavyansk and held an open forum dialogue to discuss the present and future relations between these two nations.

Kyiv, August 11, 2016.  On Tuesday, August 8th, the exhibition on “Belgian Investment in Ukraine in the late XIX – early XX century” opened in the Slovyansk at the Museum of Local History.  The exhibit consists of photos and documents that tell the story of Belgian investments into Eastern Ukrainian industry at the turn of the 19th – beginning of the 20th century in Donetsk, Luhansk, Dnipropetrovsk, and Odesa regions.  Ukraine Crisis Media Center (UCMC) with the support of the Belgian Embassy in Ukraine and two Belgian companies with ties to the region and D. Yavornytskyi Dnipropetrovsk national history museum (that initiated the exhibit) organized this exhibit in Slovyansk.

Before the grand opening of the exhibition, the Belgian Ambassador to Ukraine, Luc Jacobs, met with the Mayor of Slavyansk, Vadym Lyach, in the city hall.  During this meeting, the Ambassador spoke with the mayor about past and future relations between Belgium and Slovyansk. Although no referendums or legislation were signed, both the mayor and Ambassador agreed that their discussions are a step in the right direction towards refortified economic relations between the Belgian investors and Slovyansk. Among other topics discussed were the current political situations in Slovyansk in regards to the internally displaced persons, cultural development in the city, and the strengthening of civil society.  The Ambassador drew comparisons between the developments of Slovyansk with Belgium’s development and noted that both the city and nation can learn from each other in this respect through their common histories. Additionally, the safety and peacefulness of the city were emphasized during this meeting as a sign of returning stability after the city’s occupation in 2014.

After the meeting between the Ambassador and the Mayor, Ambassador Jacobs held a discussion forum at the town library to answer the questions of Slovyansk residents. Among the broad topics covered were Belgian perceptions of Ukraine, relations between the two nations, the effects of the free trade agreement on Ukraine, cultural exchanges between Ukraine and Belgium, and the Belgian support of Ukraine during the war in Donbas and the annexation of Crimea.

Later that evening, Ambassador Jacobs opened the exhibit at the Slovyansk Museum of Local History with words calling Belgians and Ukrainians to rediscover their common past and to tighten the relations between Belgian and Ukraine to as they were 130 years ago.

The following day, a tour of the city was organized for the Ambassador, his wife, and the representative from UCMC to visit places of significance in Slovyansk, the salt lakes, the remaining destruction from the occupation of Slavyansk, as well as the neighboring Holy Mountains Lavra in Svyatohirsk.

The exhibition has been on display in several cities of Luhansk region such as Lysychansk and Severodonetsk; and Donetsk region, namely Kramatorsk, Mariupol, Druzhkivka, and Kostiantynivka and finally reached the last city on the tour – Slovyansk. The exhibition was brought to these cities as they are the ones that had the Belgian investments some 130 years ago.