Kyiv, August 13, 2016. Russian command is preparing a provocation on the frontline in order to discredit the Armed Forces of Ukraine. “According to the Chief Intelligence Directorate of the Ministry of Defense of Ukraine, the so-called “7th separate motorized rifle brigade” (Debaltseve) conducted preparations to blast one of their own frontline positions in the vicinity of Nyzhnie Lozove village. The blast has been planned for today in front of Russian TV-channel “Life News” as an evidence of ATO troops using large caliber artillery,” said the spokesman of Presidential Administration on ATO-related issues Colonel Oleksandr Motuzyanyk.

The most intense fighting in the ATO zone yesterday took place in the Mariupol sector. 31 militants’ attacks took place in 24 hours there. Attacks started approximately at 5:30 a.m. and lasted until midnight. “Militants were actively using armored personnel carriers (APC), grenade launchers and small arms near Starohnativka, Mariinka, Shyrokyne and Bohdanivka. Moreover, the enemy opened fire from 82-mm and 20-mm mortar launchers four times near Krasnohorivka and Mariinka. These attacks were purely provocative, as militants launched one mortar shell each time, and only once used six”, informed Col. Motuzyanyk. Ukrainian troops were forced to return fire. 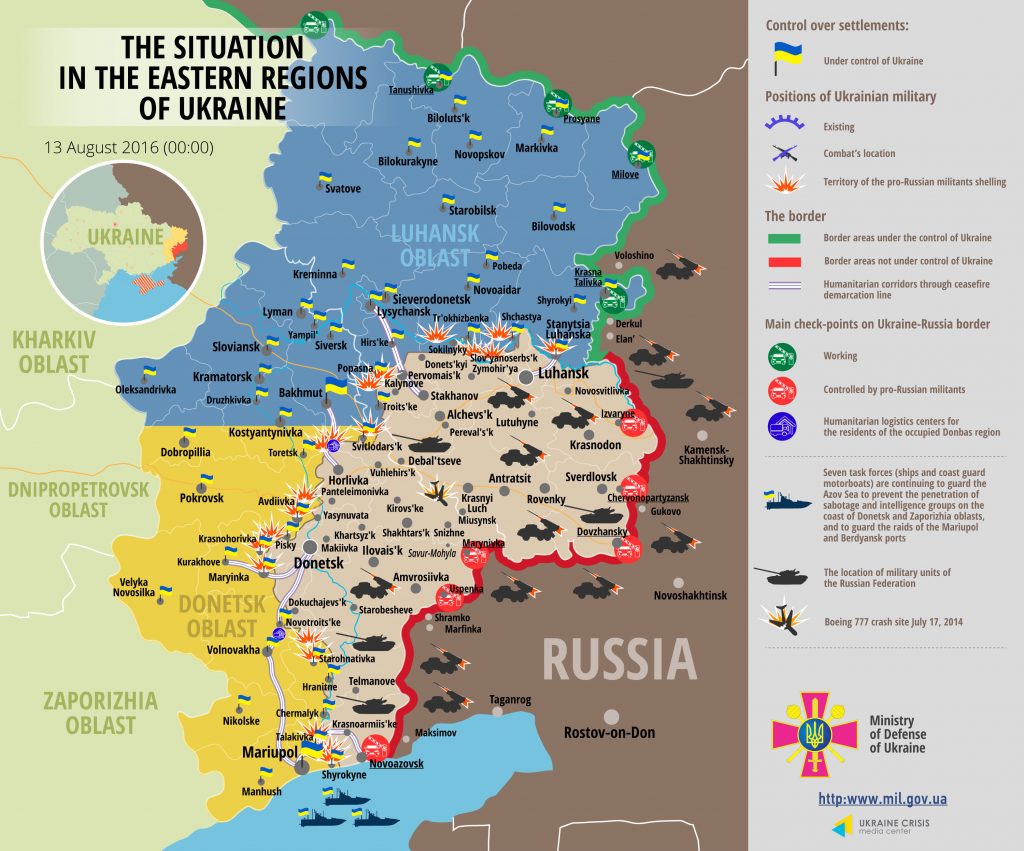 Militants conducted attacks and armed provocations in the frontline area between Lopaskyne and Stanytsia Luhanska. They were shooting from APCs, grenade launchers, machine guns and small arms near Zhovte and used grenade launchers and small arms in the vicinity of Stanytsia Luhanska. “Novooleksandrivka was the major flashpoint in the sector. Militants launched eight missiles from 22-mm artillery mounts and 13 120-mm mortar shells. Moreover, they used grenade launchers and small arms in the adjacent Novozvanivka”, said the spokesman. Sporadic armed provocations were registered near Krymske and Staryi Aidar. In total, 14 militants’ attacks took place in the Luhansk sector, two of them involved use of heavy armament and in two other cases armored vehicles were used.

16 militants’ attacks took place in the Donetsk sector, four of them from heavy armament. Half of the attacks took place at the Svitlodarsk bulge and in the vicinity of Avdiivka. “Insurgents were shelling ATO troops’ positions near Luhanske settlement almost non-stop from 5:35 to 8:45 p.m. using APCs, grenade launchers, large machine guns and small arms. Russia-backed militant groups opened fire from the wide range of grenade launchers and small arms. They launched 28 mortar shells. Moreover, hostile mortar launchers were used in the vicinity of Nevelske and Maiorsk. In total, militants launched 42 mortar shells in this sector”, elaborated Col. Motuzyanyk. Moreover, militants used grenade launchers and small arms near Zaitseve and delivered one APC shelling.

One Ukrainian serviceman died yesterday and two were injured. According to the available information, one militant was killed and two injured yesterday from among fighters of so-called “11th” and “9th”regiments, as well as “7th brigade”.

Col. Motuzyanyk also informed that seven flights of militants’ unmanned aerial vehicles were observed in the ATO zone yesterday. One of them was launched directly from the territory of Russia. Moreover, facts of moving weapons and military equipment from the territory of Russia to the temporarily occupied areas of Donbas were registered. “Six tanks, three self-propelled artillery mounts and two APCs came to Kuznetsi village in Novoazovskyi district; five trucks were brought to Sorokyne town (former Krasnodon)”, said Col.  Motuzyanyk.

The spokesman also informed that officers of the Security Service of Ukraine found a weapons cache with large amount of ammunition. “146 120-mm mortar shells, 31 fuses for them, 19 ignition charges, 13 125-mm missiles and propelling powder for a tank missile was seized from it. It was found that the cache was intended for a Russia-backed militant group of self-proclaimed “Donetsk people’s republic” to conduct combat activities against ATO troops”, said Col. Motuzyanyk.