The Mariupol sector is the epicenter of military action in the ATO zone where there was one combat engagement in addition to other military action. Russia’s proxies continue using heavy weapons and militants continue to get reinforcement from Russia.

Kyiv, August 16, 2016. Militants are preparing provocations to discredit the Ukrainian Armed Forces. “According to intelligence information, Federal Security Service of the Russian Federation delivered 200 combat uniforms of the Ukrainian Armed Forces with the insignia and hats to militant frontline positions. Fifty uniforms were delivered to the so-called “3rd brigade” in Horlivka, 50 to the so-called “100th brigade” in Donetsk to be used near Maryinka, and 100 more sets to the so-called “11th regiment” in Makyiivka to instigate provocations near Yasynuvata. As per intelligence reports, one of the possible scenarios of the combined Russian-and-terrorist troops is to imitate the advance of ATO forces in the Donetsk area and upon Horlivka from the north,” said Colonel Oleksandr Motuzyanyk, spokesman of Administration of the President of Ukraine on ATO-related issues at a press briefing at Ukraine Crisis Media Center. 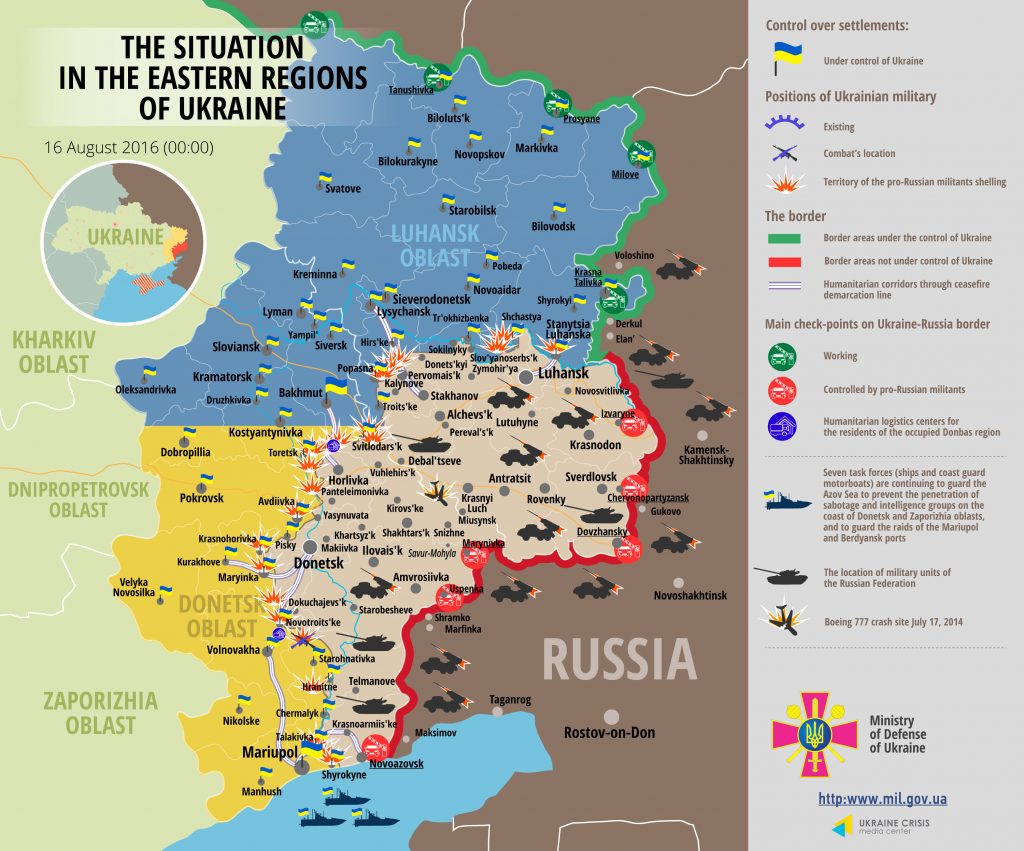 The most complicated situation stands in the Mariupol sector. At midnight, militants fired 10 artillery shells upon Ukrainian positions in Novoselivka. “Two hours later, the enemy held a massive mortar attack upon ATO forces in the area of Taramchuk village having fired 100 large-caliber mines,” noted Colonel Motuzyanyk.

At dawn, there was a combat engagement between Ukrainian troops and militants in the area of Bohdanivka village. “Under the cover of another subversive group, militants fired from grenade launchers. After a 20-minute combat engagement, militants stepped back. Two Ukrainian servicemen were wounded in action over the course of the incident,” said Colonel Motuzyanyk. Later, at around 7am, militants mortared Ukrainian positions in Vodyane. An hour later, militant mortars were firing upon nearby Talakivka. “Following the attack, the fire ceased in the entire sector,” added ATO spokesman.

Militant groups violated ceasefire near Novotroyitske in the daytime where they conducted sniper fire. In the second half of the day, militants made a long-lasting attack upon Shyrokyne; after sunset, they intensified their activities in Maryinka and nearby Krasnohorivka, where they opened fire from mortars and weapons mounted on infantry fighting vehicles. “A total of 17 hostile attacks took place in the Mariupol sector yesterday including six from heavy weapons and one combat engagement,” noted Colonel Motuzyanyk.

In the Luhansk sector, militants opened fire upon Ukrainian positions along the entire contact line. The majority of attacks, with the exception of the ones upon Stanytsia Luhanska, were short and took place in the daylight. “After the sunset, the enemy was firing upon the positions of ATO forces from the right bank of the Siversky Donets river for two hours with grenade launchers of various types, large-caliber machine guns, and fired six 120-mm mines. There were a total of eight hostile attacks in the Luhansk sector over the last day, one of which included the use of mortars,” said ATO spokesman.

Militants were intensely using mortars in the Donetsk sector over the last day. According to Ukraine’s General Staff, Russia-backed militants fired over 160 mines along the contact line. Northern outskirts of Horlivka, as well as Avdiivka’s industrial zone, were epicenters of combat actions – two thirds of all the attacks in the Donetsk sector happened there. “Attacks in Avdiivka mostly took place during the daytime. Responding to occupants’ aggression, Ukrainian troops returned fire on a number of occasions,” added Colonel Motuzyanyk. Militant groups were also active at the Svitlodarsk salient and west of Horlivka. Militants were mostly active in the above areas during the nighttime hours and used weapons mounted on infantry fighting vehicles, grenade launchers, and small arms. In the area of the Donetsk airport, it was quiet. Militants made a total of 23 attacks in the Donetsk sector, 13 of which were made with heavy weapons.

According to intelligence information, seven militants from three units were killed and nine more wounded in Donetsk and Luhansk regions. The so-called “9th separate assault motor-rifle naval regiment” deployed to Novoazovsk suffered the biggest losses. “One militant killed in action was identified. It was Volodymyr Sugonyaka, born in 1963. At the same time, militants incurred losses having tripped mines in their own mine filed. They were intoxicated with alcohol and tried to ‘launch a psychological attack upon ATO forces’,” said Colonel Motuzyanyk.