Kyiv, August 18, 2016. Russia sent new shipments of weapons and ammunition to the temporarily occupied territories. “Five T-72 tanks were delivered to Luhansk, three more T-64 tanks arrived in Sverdlovsk, four trucks with fuel and lubricates as well as two railway cars with ammunition arrived in Khartsyzsk,” said spokesman of Administration of the President of Ukraine on ATO-related issues Colonel Oleksandr Motuzyanyk at a press-briefing at Ukraine Crisis Media Center. 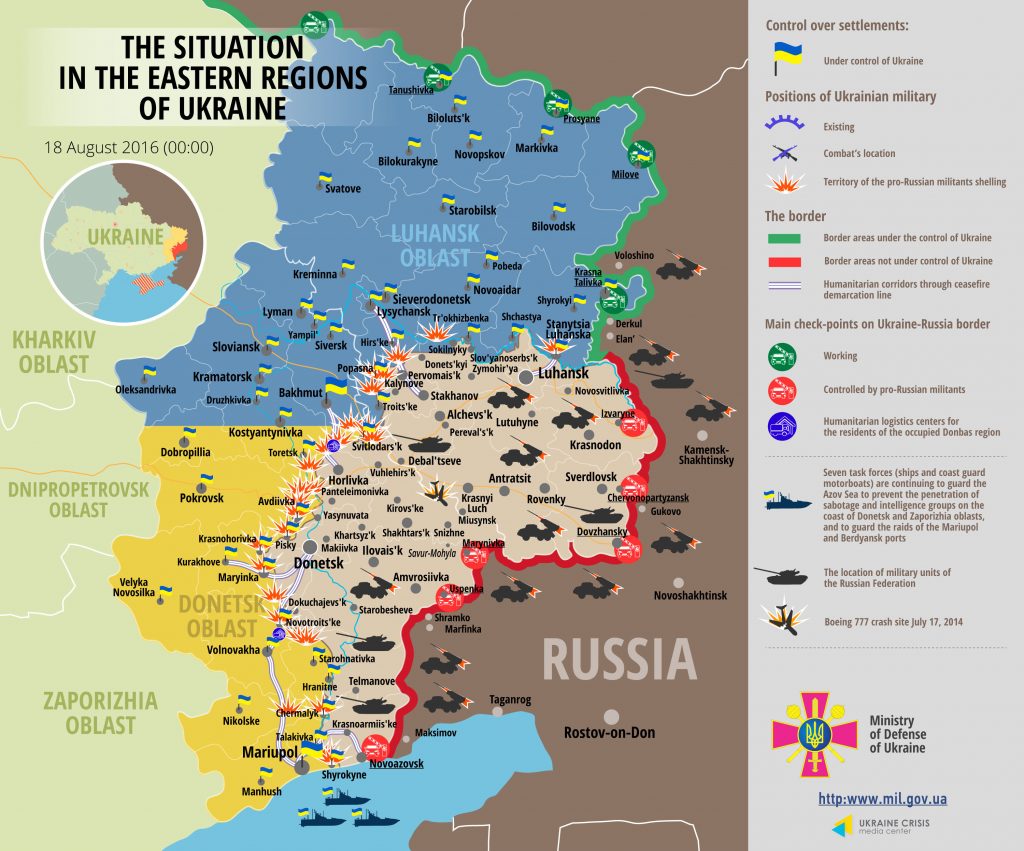 Generally, the situation in the ATO zone escalated yet again over the last day. Russia-backed militants increased the number of attacks upon Ukrainian positions almost twice. “There were 96 cases of ceasefire violations against 52 ones the day earlier. The enemy was using artillery in all sectors even during the daytime,” noted ATO spokesman. According to the information by Ukraine’s General Staff, militant groups fired over 500 mortar mines and over 300 artillery shells upon Ukrainian positions at the contact line. Such intensity and the use of heavy weapons on the part of militants were last observed a year ago – in August of 2015.

Three Ukrainian servicemen were killed in action over the last day and six more were wounded in action.

In the Luhansk sector, the epicenter of combat actions was in the Popasnyansky district. After midnight, militants held a massive artillery and mortar attack. “In Popasna, militants were active late in the evening using artillery against Ukrainian defenders,” added ATO spokesman. During the daytime, militants violated ceasefire several times actively using grenade launchers and machine guns in the area of Bakhmutska road and Stanytsia Luhanska. In the same area, militant groups were firing from the weapons mounted on infantry-fighting vehicles. “There were a total of 19 hostile attacks in the Luhansk sector over the last day including four artillery ones and three with the use of mortars,” added Colonel Motuzyanyk.

In the Donetsk sector, the day started with massive mortar attacks that militants made at the Svitlodarsk salient and between Novoselivka Druha and Avdiivka. At dawn, militants opened fire from mortars and artillery in the area of the Donetsk airport. “Most powerful attacks upon Avdiivka commenced at 10am and lasted with breaks till the end of the day. Adversary used 82-mm and 120-mm mortars as well as 122-mm artillery located in Yasynuvata and south of the town,” said the ATO spokesman. Militants became active in other parts of the front in the evening. Massive mortar and artillery attacks by militants took place at the Svitlodarsk salient, on the northern outskirts of Horlivka and in Novhorodske. Russia-backed militants also used armored vehicles in the above areas. Militants made a total of 45 attacks in the Donetsk sector over the last day, 34 of them were made with heavy weapons.

In the Mariupol sector, right after midnight, militants fired 40 152-mm artillery shells near Hranitne in two hours. In Maryinka district – between Krasnohorivka and Maryinka, there was also a series of mortar attacks between 2:00 a.m. and 4:00 a.m. Later at midday, skirmishes between Ukrainian troops and militants began and they lasted till the late evening. In the south of the Mariupol sector, a tense situation was observed in Talakivka, Vodyane, and Shyrokyne. “Occupants are violating ceasefire all along the contact line, there are no calm parts in the entire Mariupol sector. There were a total of 32 hostile attacks in the Mariupol sector over the last day, more than one third of them were made from heavy weapons,” noted ATO spokesman.