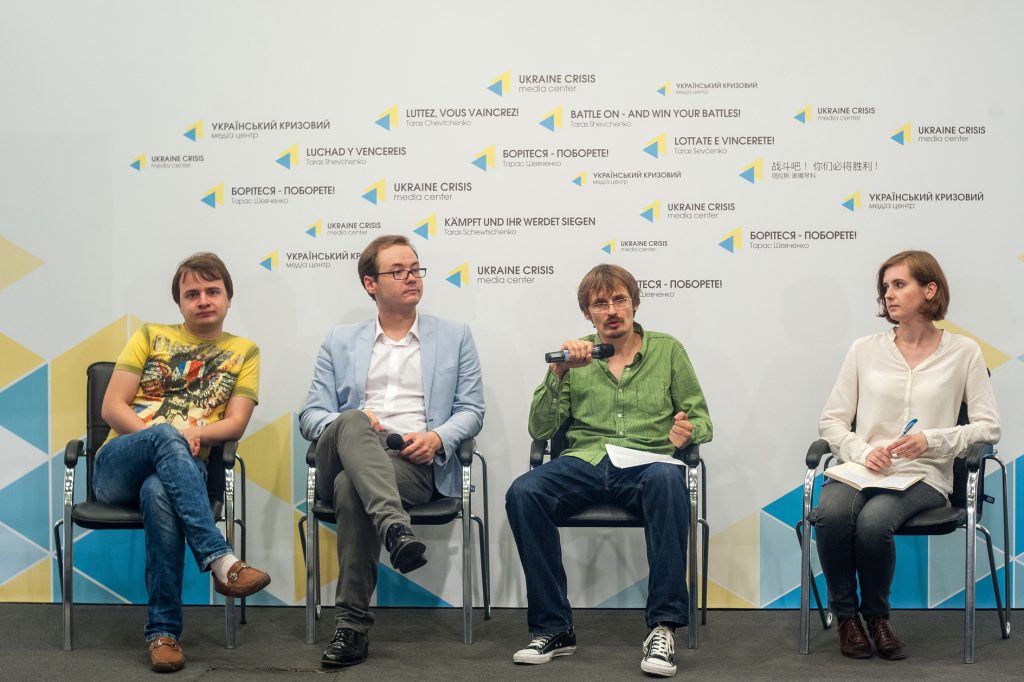 Experts discuss the internal and legislative reforms that are still necessary to make the National Police Force of Ukraine as strong of a law enforcement body as possible.

Kyiv, August 18, 2016. The National Police have become a symbol of successful reform in post-Maidan Ukraine. However, to be a really strong law enforcement body, it still has a long way to go. Experts emphasize that there are still cases of abuse of power and neglect of duty in the National Police and applicable laws are still imperfect. Experts identified several key areas for further reforms of the National Police at a briefing held at Ukraine Crisis Media Center.

Police must protect human rights, not the rule of law.

“Human rights should be police’s priority. Law and order cannot be put above. Ignorance and unwillingness to study the human rights issue have led to talks of further complication [strengthening] of laws on peaceful gatherings,” said Bogdan Chumak, deputy head of all-Ukrainian youth NGO “Regional Initiatives Foundation”. Similarly, according to Mykhailo Lebed, expert on freedom of assembly & parliamentary lobbying issues, police should take a more active role in case of violations during rallies and protect peaceful participants. The expert also advocates direct prohibition to disperse peaceful protests. “There are complex cases, civil disorders, but these disorders take place simultaneously with peaceful processions. To disperse all indiscriminately is not what Maidan stood for,” believes Mr. Lebed.

Nataliya Krynytska, director of advocacy service, all-Ukrainian youth NGO “Regional Initiatives Foundation”, spoke about the initiative to regulate the use of riot control weapons during peaceful gatherings. The law should spell out the maximum rate of water pressure in water cannons and prohibit their use at a distance of less than 30 meters, as well as taking aim at the person’s head. Another problem is indiscriminate use of riot control weapons. “Indiscriminate use is illegal. When a flash bang grenade flies into the crowd where there are three aggressive participants and 50 peaceful participants, journalists, doctors, etc., anybody can suffer,” explained Mykhailo Kamenev, ex-lawyer of the National Police of Ukraine.

According to Bogdan Chumak, updating the National Police personnel is especially important in the southern and eastern regions of the country. It is mostly former militiamen who still hold positions in the police there. The role of Territorial commissions becomes more and more unclear, as the final say in personnel matters rests with the Ministry of Interior. “They keep appointing people they wish. People with a negative reputation can also be appointed. Those who are truly independent have no chances. If you managed to dismiss a negative head, he can be easily reinstated through court action. And if it is a top rank figure, then the Minister himself can reinstate them,” said Mr. Chumak.

Ex-lawyer of the National Police, Mykhailo Kamenev, noted that there might be a pullback in protecting human rights. The reason for this is a recent statement of the National Police head that the current Criminal Procedure Code of Ukraine (adopted during the times of Yanukovych) is too liberal. “It’s a bad sign,” said the lawyer.

However, he stressed that the current Code of Administrative Offences (adopted in the USSR) is outdated and contains absurd rules. “It is necessary to add the issue of criminal and administrative offenses to the CPC. Spell out procedures. Enter the concept of detention on criminal and administrative codes. No “invitations”, “deliverances” [to the police station] – this creates too many opportunities for abuse,” explained Mr. Kamenev. He noted that people do not distinguish between so-called questioning and detention, and in most cases they are not even aware that they can refuse. Experts insist that legislation should oblige police officers to inform citizens of this option. In general, according to Mr. Kamenev, the regulatory framework is very weak. There is only a law on the National Police, but no regulations for its implementation. There is no regulation for the use of cameras in police clothes, no restriction what information can be stored in their database and how long it can be there. This violates individual privacy and creates opportunities for abuse.

The expert community demands to strengthen rules on identifying policemen and to impose sanctions for violating rules of wearing tokens and personal numbers. They also suggest that citizens should have the opportunity to refuse obeying policemen’s orders if they violate the rules. “If a policeman has no badge, we have the right not to obey. Policemen are not given badges because they have not been re-certified yet. Police authorities fear that such policemen will use their badges in an illegal manner. But we know that it is those policemen who take too much for granted, who, as a rule, do not wear badges,” said Mykhailo Lebed. The same is true about the National Guard. They do not wear badges when guarding peaceful demonstrations. Therefore, they cannot be identified when necessary. Experts insist that units that participated in the ATO zone and have experience in fighting should not be involved in the protection of civilian events.

Mykhailo Lebed also announced a number of provisions of the law that need to change. Among them is verification of documents only for the intention to commit an administrative offense. “Suspicion that you are going to trample down grass or smoke in a public place is not enough to check your documents. The same applies to arbitrary deprivation of belongings. You have to be suspected of something to be deprived of any property,” considers the expert. In his view, superficial check also requires revision. Currently, it can be done without witnesses, so you can easily be planted anything. Mr. Lebed proposes to install video cameras on the uniforms of the policemen who carry out such checks.