Militants engage in a firefight near Bohdanivka village. They attack in all the sectors, damaging a school and a church. Seven reconnaissance flights of hostile UAVs registered yesterday. Moreover, insurgents continue electronic warfare.

Kyiv, August 19, 2016. The total number of militants’ attacks in the ATO zone decreased in the past 24 hours in comparison with August 17. Nevertheless, insurgents continued actively using heavy weapons and armor. “One of the most difficult nights at the Svitlodarsk bulge in the Donetsk sector was yesterday. Militants located in Kalynivka and Horlivka launched 136 artillery missiles at Ukrainian troops’ positions near Luhanske and Semyhiria. Moreover, militants were actively using 82-mm and 120-mm mortars. The biggest number of attacks was registered on the northern and western outskirts of Horlivka,”said spokesman of Presidential Administration on ATO-related issues, Colonel Oleksandr Motuzyanyk, at a press briefing at Ukraine Crisis Media Center. 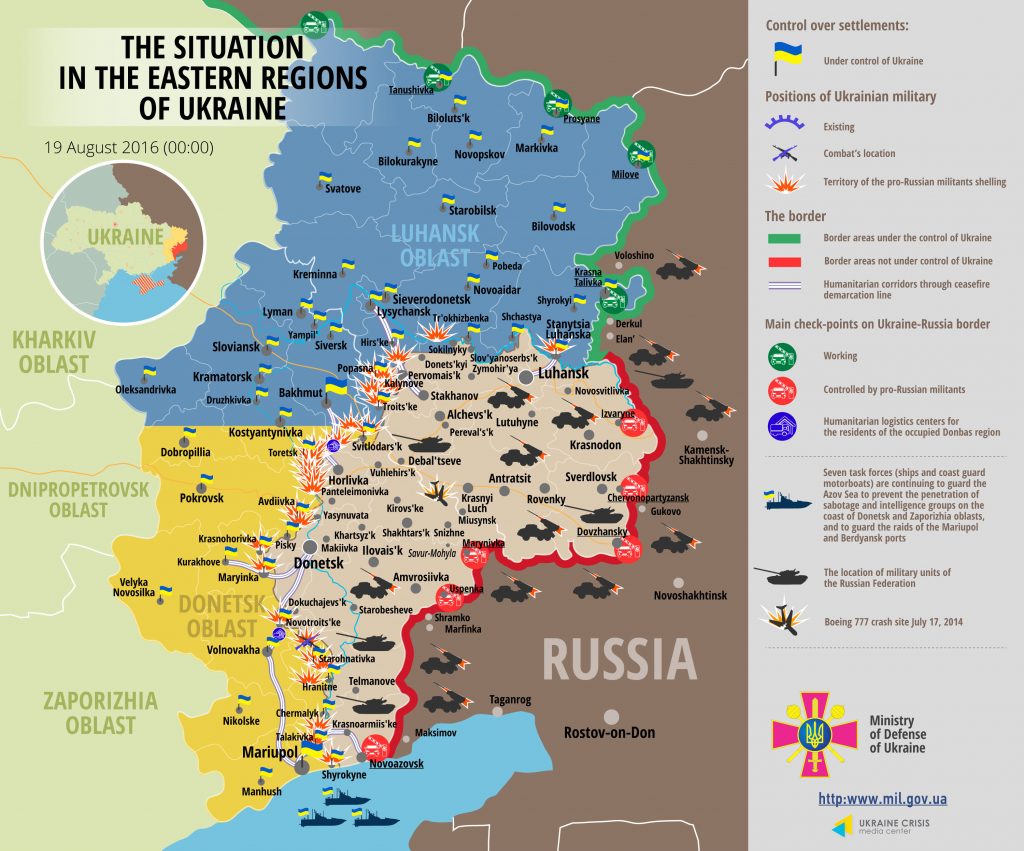 In total, militants launched 130 mortar shells in the Donetsk sector. Moreover, armored personnel carriers (APC) were actively used in this area, and militants shelled the vicinity of Troitske from a tank. The situation remains traditionally restless near Avdiivka where militants used mortar launchers, grenade launchers and small arms. “One shell hit a part of St. Michael’s cathedral located in the central area of the town,” said the spokesman.

Militants shot from 120-mm mortars near Zolote and 122-mm artillery systems in the vicinity of Novozvanivka and Kalynove in the Luhansk sector. “Following a lull in fighting in the morning, the enemy resumed shelling using grenade launchers and small arms from 3:45 p.m. till midnight near Popasna and Novooleksandrivka. A local school building was damaged in Stanytsia Luhanska as a result of militants’ attack,” added Col. Motuzyanyk.

A firefight took place near Bohdanivka village in the Mariupol sector on the night of August 17-18. “Ukrainian Armed Forces responded with fire and made militants retreat,” said the spokesman. Except for short calm periods, armed provocations continued along the entire area almost 24/7. The situation was the most difficult in the vicinity of Myrne village where militants delivered artillery shelling. Insurgents launched 74 mortar shells near Mariinka. Six shells more were fired by Russia-backed fighters near Pavlopol. “In addition, militants instigated armed provocations in every flashpoint using grenade launchers and small arms. The occupants were shooting from APC near Tolokivka,” informed Col. Motuzyanyk.

Two Ukrainian troops died yesterday and eight were wounded. All the losses were incurred as a result of attacks in the Donetsk sector.

Ukrainian military intelligence found yet new evidence that militants are keeping their heavy armor in close proximity to the frontline. “Hostile 152-mm cannons Giatsynt-B are located in Hranitne-Chemarlyk area. Two more Giatsynt-B cannons were moved to Donetsk. The entire artillery battery with Giatsynt-B cannons was observed on the outskirts of Makiivka,” said Col. Motuzyanyk.

Militants are conducting active aerial reconnaissance of the ATO troops’ positions. Our forces registered four flights of unmanned aerial vehicles in the Luhansk sector, two flights in the Donetsk sector and another one in the Mariupol sector. “Moreover, militants used a Diabazol electronic warfare suite in the vicinity of Pavlopil,” added Col. Motuzyanyk