Militants launch over 160 mortar shells at Ukrainian positions in the Donetsk sector. Krasnohorivka and Shyrokyne become central flashpoints in the Mariupol sector. Hostile UAVs conducting reconnaissance observed in both sectors.

Kyiv, August 22, 2016. Field investigators of the Security Service of Ukraine found a cache with almost two tons of TNT in the ATO zone. “75 deadly boxes were located in Mariinka district of the Donetsk region. According to intelligence, militants built the cache on the eve of the 25th anniversary of Ukrainian independence to commit terrorist attacks. Nevertheless, intelligence services are doing their best to prevent Russian provocations during the festivities,” said the spokesman of the Presidential Administration on ATO related issues, Colonel Andriy Lysenko, at a press briefing held at Ukraine Crisis Media Center. 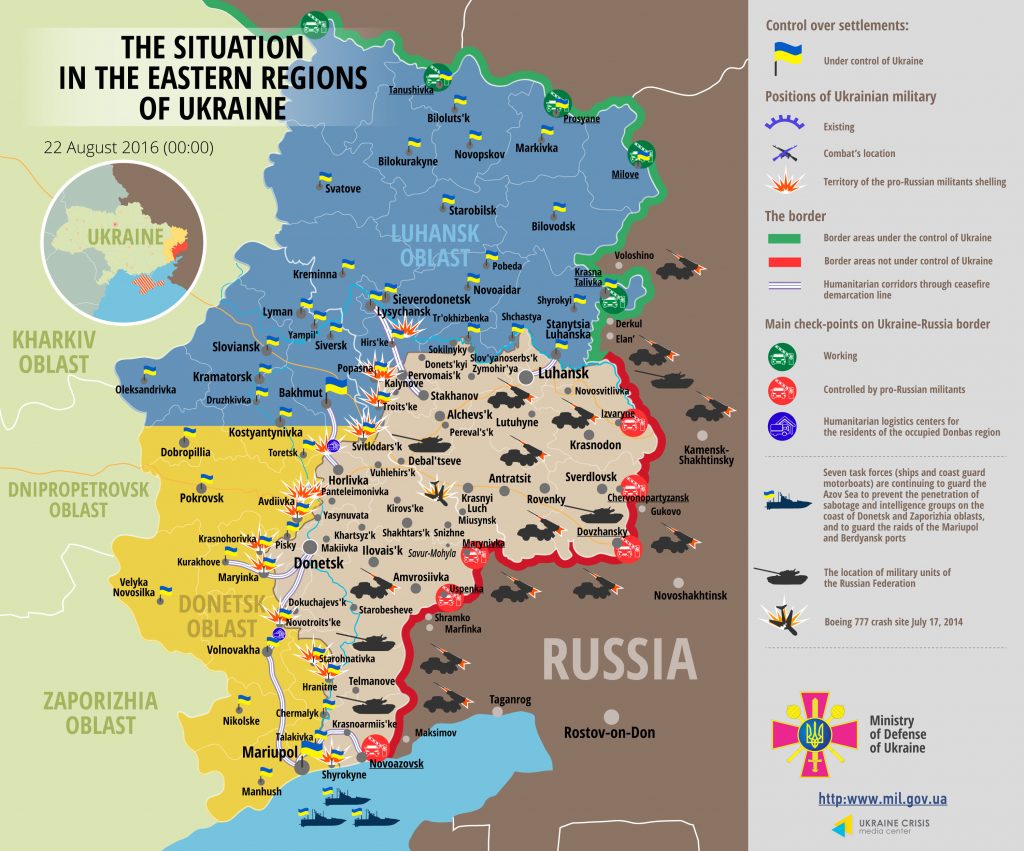 Main hostilities in the Luhansk sector took place near Popasna yesterday. Militants were shelling several Ukrainian positions simultaneously both during the day and nighttime hours. Russian proxies used mortar launchers twice near Novooleksandrivka and Troitske. “Moreover, occupants’ artillery attack took place at night south of that area, in the vicinity of Toshkivka,” added the spokesman.

In the Mariupol sector, the most active hostilities took place in Novotroitske yesterday. “Adversaries fired 60 mortar shells and artillery missiles at our positions in 35 minutes. Another mortar attack on the same positions took place at night,” said Col. Lysenko. Krasnohorivka and Shyrokyne became yet other flashpoints, where militants are actively shooting from mortar launchers. Solodke village came under fire of militants’ heavy weapons. A residential building and household outbuildings were damaged in the shelling.

Col. Lysenko also informed that two militants’ unmanned aerial vehicles were observed in the ATO zone yesterday – one in the Donetsk sector and another one in the Mariupol sector.