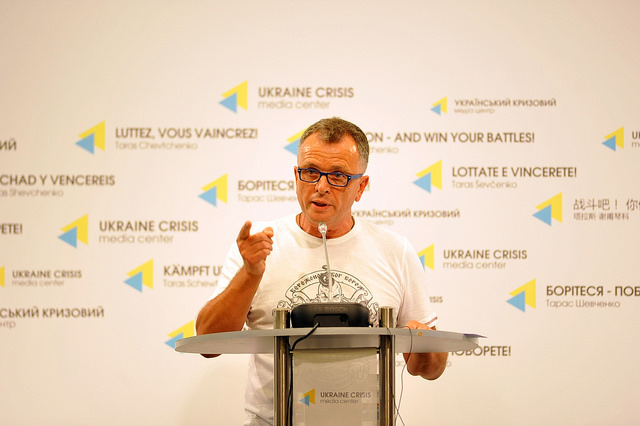 Kyiv, August 23, 2016. Yesterday, there were searches in the office of КМ Core Company. The decision of the Pechersk court in Kyiv was on searches in Yuarms Company, which is located at the same address as KM Core. The building has 500,000m2 and houses hundreds of different companies. “Several dozen employees of the GPU (Prosecutor General’s Office of Ukraine – UCMC), strange people who swore obscenities and, in contrast, polite Alpha SBU (Security Service of Ukraine – UCMC) employees who left some time later… They broke into the offices of a dozen companies, without any reason. They even went to see the cleaners and drivers and took away their personal things as evidence,” said Yevgen Utkin, President of KM Core High Tech Holding Company, at a briefing held at Ukraine Crisis Media Center. He also noted that the Prosecutor General’s Office accused KM Core of non-delivery of software under a contract with state gas company Ukrgazvydobuvannya. However, according to Mr. Utkin, his company did not have to do it because it was engaged in other services for which they, incidentally, did not receive any pay. As to Yuarms Company, it does not carry on any economic activity, there is only one person there, and the company was founded in 2015. And the court decision mentioned some certain activities from 2012. The searches also affected volunteers working on technologies for the army.

According to Svyatoslav Svyatnenko, Director of Business Development, Borsch Ventures, 9.000 IT specialists left Ukraine over two years. Every 2 hours one IT specialist leaves the country. This is a USD 9 billion loss for the state.

Sergiy Leschenko, MP, said that the court decision mentioned a prosecutor from the Department of Dmytro Sus, who was associated with torturing of NABU (National Anti-Corruption Bureau – UCMC) employees and persecution of Vitaliy Kaskiv. He, in his turn, belongs to the so-called Department “Kononenko, Granovskyi” (Igor Kononenko and Oleksandr Granovskyi, both are members of parliament from Poroshenko Bloc). “This department is engaged either in political affairs or making money,” noted the MP.

Viktor Galasiuk, MP, stressed that they had come to check “an investor, a person who is the pride of Ukraine. He is a very important person in IT industry. This is a huge blow to investment attractiveness. This is strong message for investors. ”

“Society should consist of such people. But, in fact, there is destruction. The government should think whether they are involved in destroying or building the state. At present, our state exists outside of this country,” believes Sergiy Gusovskyi, Head of “Samopomich” faction in Kyiv City Council.

“Law enforcement officials have not investigated the cases of many notorious people who led to the conflict in the east. These are “Boiko’s derricks”, Klymenko‘s case and so on. And all this because of inaction of the current law enforcement bodies,” said Svitlana Zalishchuk, MP. She added that Western diplomats begin to ask what these signals mean. “At the meetings in Washington, we raised the question that Barack Obama is the only US president who had not visited Ukraine. And they answered that “he cannot visit you because we send you so many signals that you have not changed anything. We cannot link the authority of the president with the country where there are not any reforms,” said Victor Vovk, MP.

Vasyl Hatsko, Co-Head of the Party “Democratic Alliance”, said that the government must immediately respond to these events. “Any delay leads to big losses: people who leave Ukraine, investors who do not come, taxes that are not paid to the budget,” he explained.

Kateryna Glazkova, Executive Director of the Union of Ukrainian Businessmen, reminded about Bill 3719, under which you cannot seize all “what you see, personal belongings, you cannot take the servers but only copy”.

“The authorities’ words do not meet their actions, we have seen nothing but PR. Businesses must unite and understand that only joint effort is the way to survive,” says Larysa Mudrak, Vice-President of the Association of Benefactors of Ukraine.