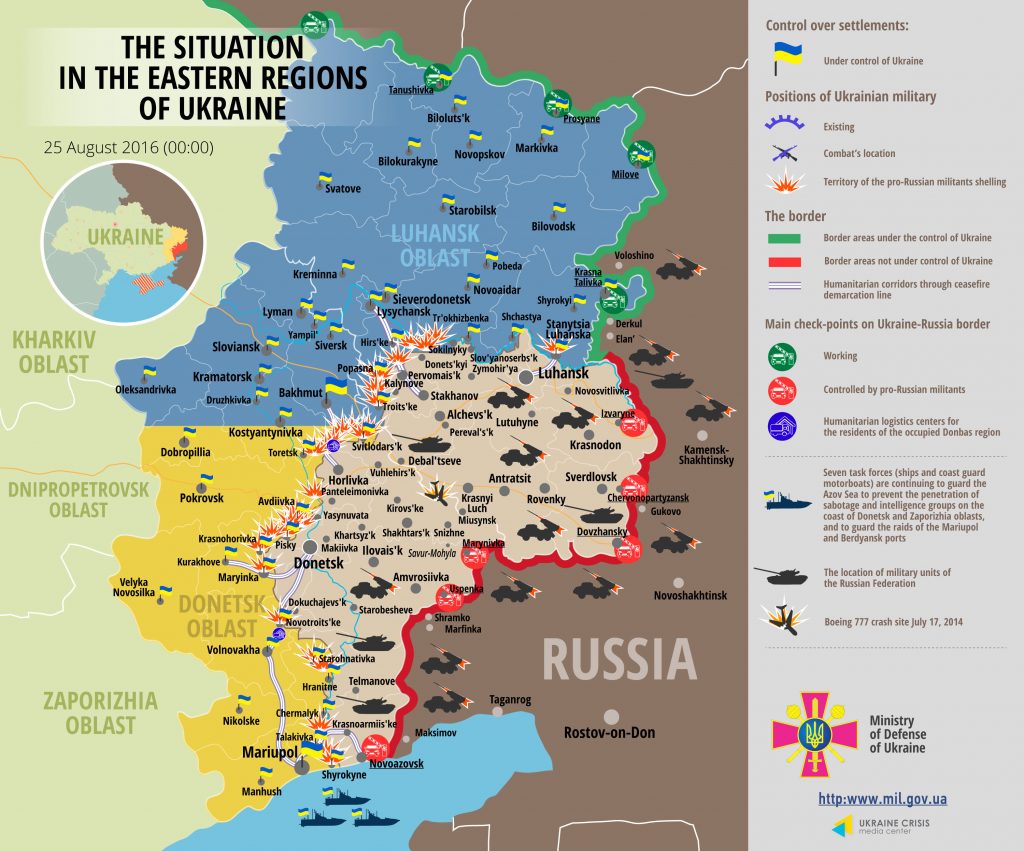 According to him, the Independence Day was characterized by further escalation of the situation along the entire frontline. Militants’ tank, mortar and artillery attacks yesterday were the most intense from the times of the battle for Debaltseve.

Two hostile attacks involving use of mortar launchers took place at night in Stanytsia Luhanska in the Luhansk sector. Ukrainian troops responded with fire. The armistice held in the vicinity of Shchastia. Militants were shooting from mortar launchers, 152-mm cannons and tank near the Bakhmut road along the entire frontline from Krymske to Novotoshkivske. The number of missiles fired at our position is counted in dozens. All the attacks took place during the hours of darkness. “The situation near Popasna is the same. Occupants used 152-mm howitzers there as well. Militants hit civil objects yet again. Due to hostile artillery shelling, roof and windows in a house were damaged,” said Col. Motuzyanyk. In total, adversaries delivered 25 hostile attacks in the Luhansk sector yesterday, 11 of these involved use of heavy armor.

The situation in the Donetsk sector is much more complicated. Militants used heavy armor – tanks, mortar launchers and cannons – along the entire frontline from Troitske to Krasnohorivka both during the day and at night. There were no calm areas there yesterday. “Attacks continued non-stop from midnight to 4 a.m. and from 5 p.m. to midnight. Total number of mortar shells and missiles (from howitzers and tanks) launched by the adversaries reaches several hundred,” elaborated Col. Motuzyanyk. In total, 38 hostile attacks took place in the Donetsk sector yesterday, 29 of these involved use of heavy armor.

The enemy conducted unprecedentedly intense attacks at Ukrainian positions in the Mariupol sector at dawn from Gvozdika self-propelled artillery mounts, launching 120 missiles at our positions within one hour. “According to the Chief Intelligence Directorate, militants’ so-called 9th regiment occupying positions near Shyrokyne, received and use mobile reconnaissance system PRP-4A “Argus”. This modern Russian complex is destined for conducting artillery reconnaissance and adjusting artillery fire,” informed the spokesman. Militants’ mortar attacks took place yesterday night in Krasnohorivka, Novohryhorivka, Starohnativka and Shyrokyne. Moreover, militants are actively violating the ceasefire in other frontline areas, first of all in Mariinka and in Pavlopil-Vodiane area.

Ukrainian Armed Forces incurred no losses in combat yesterday, and three troops were wounded. Three flights of unmanned aerial vehicles were registered in the ATO zone in the Luhansk and Donetsk sectors.