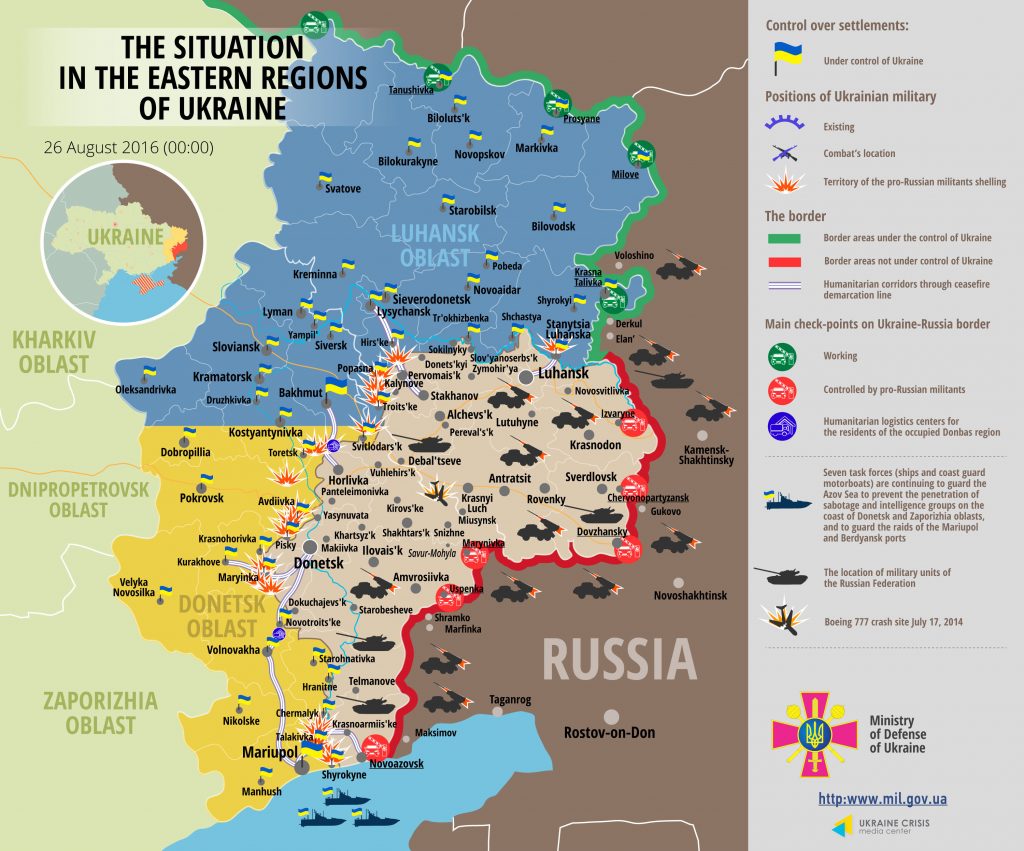 In the Luhansk sector 10 attacks of Russia-backed militants took place, three involved use of heavy armor. Most of them took place in the vicinity of Popasna. “Enemy was shelling several Ukrainian positions simultaneously, both at daytime and during the hours of darkness. Russia-backed militant groups used mortar launchers twice – near Novoleksandrivka and Troitske. Moreover, occupants’ artillery attack took place to the east, near Toshkivka. Eight missiles were launched,” said the spokesman.

Militants violated the ceasefire in the Mariupol sector 15 times, using heavy armor seven times. The most intense attacks took place near Novotroitske. “The adversaries launched 60 mortar shells and artillery missiles at our positions within 35 minutes. Militants delivered another mortar attack at the same position at night. Krasnohorivka and Shyrokyne were the other flashpoints where occupants were actively shooting from mortar launchers,” said Col. Lysenko. A residential building and household outbuildings were damaged in militants’ shelling in Solodke village.

Col. Lysenko also informed that two flights of militants’ unmanned aerial vehicles were registered yesterday – one in the Donetsk sector and another one in the Mariupol sector.

Ukrainian Armed Forces incurred no losses in combat, and six troops were wounded. According to the available information, seven militants died and five were injured. “Equipment ammunition for self-propelled artillery mount exploded in so-called 5th brigade (Makiivka), resulting in death of three militants and injuries sustained by one more,” said Col. Lysenko.

The spokesman also said that rotation of Russian troops took place on the occupied territories in Donbas. “50 servicemen of the 7th air assault division of Russian Airborne Troops (homebase – Novorosiysk) arrived at Rovenky through Dovzhanskyi checkpoint for partial replacement of the company task force,” he elaborated.

Col. Lysenko said that field investigators of the Security Service of Ukraine found 75 boxes containing almost two tons of TNT in Mariinka district of Donetsk region. Moreover, a ball grenade was seized from one of the passengers at Mariupol bus station and 7.62 mm ammunition from another one on the same day.