The situation is restless in all the sectors. Militants use all types of weapons to shell both Ukrainian position and inhabited localities. A powerful shelling takes place in Shyrokyne, where militants launch over 180 mortar shells within two hours.

Kyiv, August 27, 2016. Russia-backed militants conducted a series of powerful attacks at Stanytsia Luhanska using mortar launchers and armor, which resulted in damaged trunk transmission line, leaving 12 thousand people without electricity and water.The fault is located in dangerous place where repair crew is working,” informed Colonel Andriy Lysenko, spokesman of the Presidential Administration of Ukraine, at a press briefing at Ukraine Crisis Media Center. Krymske was another flashpoint yesterday. Russia-backed militant groups opened fire from 122-mm artillery three times. All the attacks took place during the hours of darkness, in total over 70 missiles were launched. “A number of hostile provocations took place in other frontline areas – in Syze, Zolote and Popasna,” added Col. Lysenko. 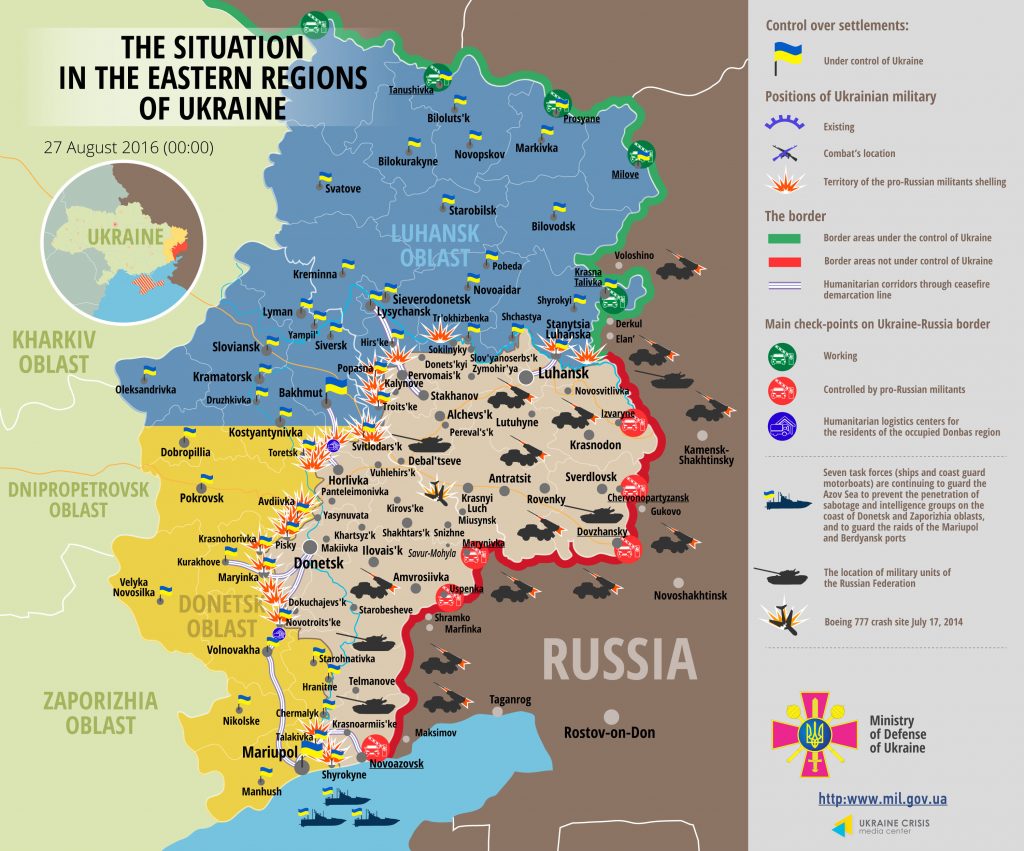 37 hostile attacks took place in the Donetsk sector, mostly from heavy armor. Russian proxies violated the ceasefire along the entire frontline, except for an area south of Horlivka and north of Yasynuvata. Especially intense attacks at Ukrainian positions took place at the Svitlodarsk bulge, near Zaitseve, in the Avdiivka industrial area and in Avdiivka-Pisky frontline area. In addition to massive use of mortar launchers, the enemy used cannons and tanks. “Militants damaged two residential buildings during a night shelling. According to preliminary information, their residents escaped unharmed,” said Col. Lysenko.

In the Mariupol sector 31 hostile attacks took place, 17 of them from82-mm and 152-mm mortar launchers and 52-mm cannons. Two civilians were injured: a hostile sniper shot a volunteer dead and a man was wounded at Mariinka checkpoint. Entire batteries of militants’ mortars and cannons are deployed along the frontline. “They are located in Staromykhailivka, Petrovskyi district of Donetsk, Olenivka, Dokuchaevsk, Kominternove and Sakhanka,” elaborated the spokesman. Record long and intense mortar attack took place in Shyrokyne. According to Col. Lysenko, militants launched over 180 mortar shells at our positions within two hours. “There are no calm areas in the frontline, attacks are registered virtually near each inhabited locality and important ATO troops’ position in the frontline,” emphasized the spokesman.