Militants continue shelling Ukrainian positions in all the sectors. Mariinka-Krasnohorivka area and Shyrokyne   remain the central flashpoints. Flights of unmanned aerial vehicles registered at the Svitlodarsk bulge and in the Mariupol sector. 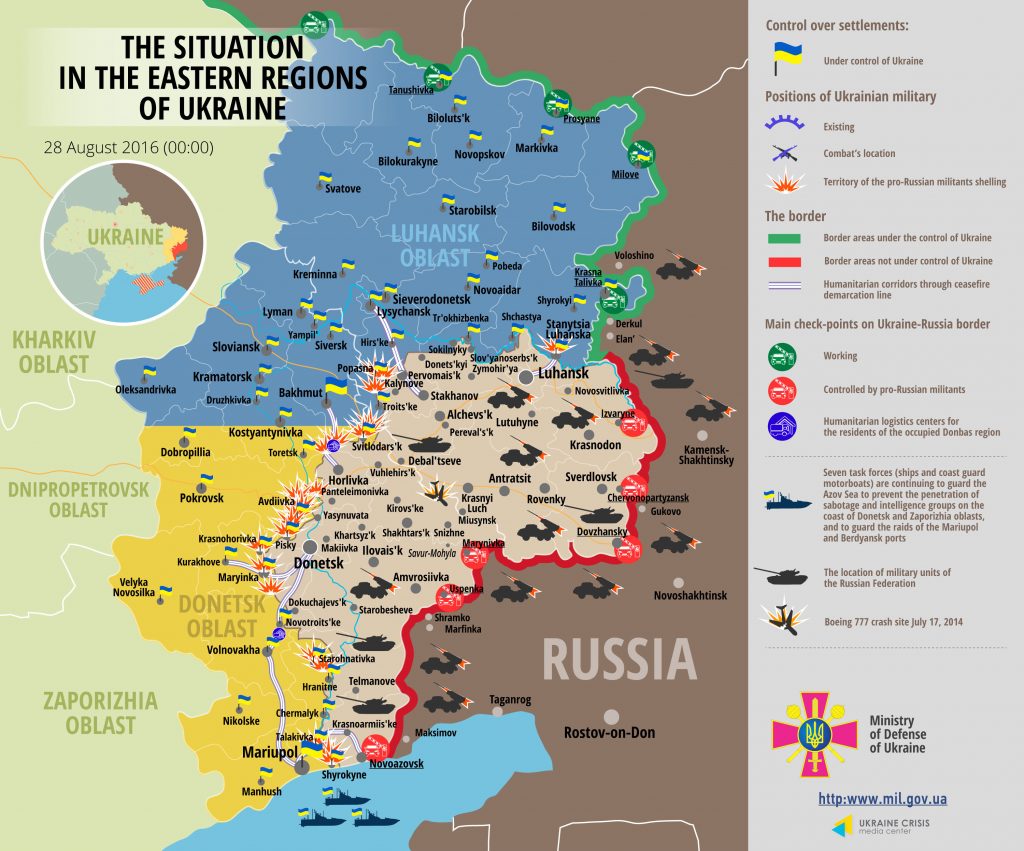 26 hostile attacks took place in the Donetsk sector, 17 used mortar launchers. Artillery was used twice – in Luhanske and in the vicinity of the Donetsk airport. Mortar launchers were used along the entire front line. The situation was the most restless on the north outskirts of the occupied Horlivka, Zaitseve and Maiorsk, where the enemy used armor and mortar launchers. “According to the General Staff’s estimates, adversary launched over 100 mortar shells at Zaitseve defenders in one day. Heavy armor was used less frequently in Avdiivka,  central flashpoint of the last days. Russian proxies mostly shelled ATO troops’ positions in the industrial area using grenade launchers and machine guns. On average, each attack lasted one hour, said the spokesman.

24 hostile attacks took place in the Mariupol sector, nine from heavy armor. The vicinity of Mariinka – Krasnohorivka area and Shyrokyne were the central flashpoints. The highest activity of the enemy in both areas took place during the hours of darkness when Russia – backed militant groups are using mortar launchers.

Moreover, militants conducted artillery attack at ATO troops in Shyrokyne. “Militants’ sniper was active in Mariinka. Mortar attacks at our positions took place in Taramchuk, Talakivka and Vodiane, one shelling in each place,” said Col. Lysenko.

Two Ukrainian troops died in combat and four were injured. Two flights of hostile unmanned aerial vehicles took place in the ATO zone – at the Svitlodarsk bulge and in the Mariupol sector.

According to the spokesman, militants’ command ordered to apply EW systems to OSCE SMM unmanned aerial vehicle (UAV) and shoot it down. Militants receive a week’s leave and three liters of ethyl alcohol for each downed UAV,” added Col. Lysenko.

Confirmed militants’ losses amounted to one militant dead and four wounded. Moreover, 19 corpses of dead Russian servicemen were taken away in a refrigerator to Russia on the night from Friday to Saturday.

Two inhabitants of Donna returned to peaceful life owing to the program of the Security Service of Ukraine “You are waited for at home”. “One of them joined the militants of self-proclaimed “Donetsk People’s republic” (“DPR”) in spring 2014 and was guarding administrative buildings in Lyman town, Donetsk region.  Following liberation of the town from the occupants, the man was afraid of criminal liability and fled to Russia. In the end, owing to support from the intelligence services, former militant returned to Ukraine and started cooperating with investigators,” said Col. Lysenko.