Kyiv, August 31, 2016. The situation in the Luhansk sector in the ATO zone escalated yesterday. “Russia-backed militants conducted a series of extremely intense attacks from heavy weapons – 120-mm mortar launchers, 122-mm and 152-mm cannons in Stanytsia Luhanska, Shchastia, Zhovte and Popasna district,” informed the spokesman of the Presidential Administration on ATO related issues Colonel Andriy Lysenko at a press briefing at Ukraine Crisis Media Center. He said that militants were shooting from the distance of 10 km and more, and the shells launched are counted “in tens”. “Many towns incurred serious damages. For instance, one house in Shchastia was burned to the ground and several more were smashed up (riddled walls and roofs, broken windows). A church, power and water supply lines were damaged as well. A nurse of Shchastia town hospital was wounded in the head, doctors are fighting for her life now,” added Col. Lysenko. 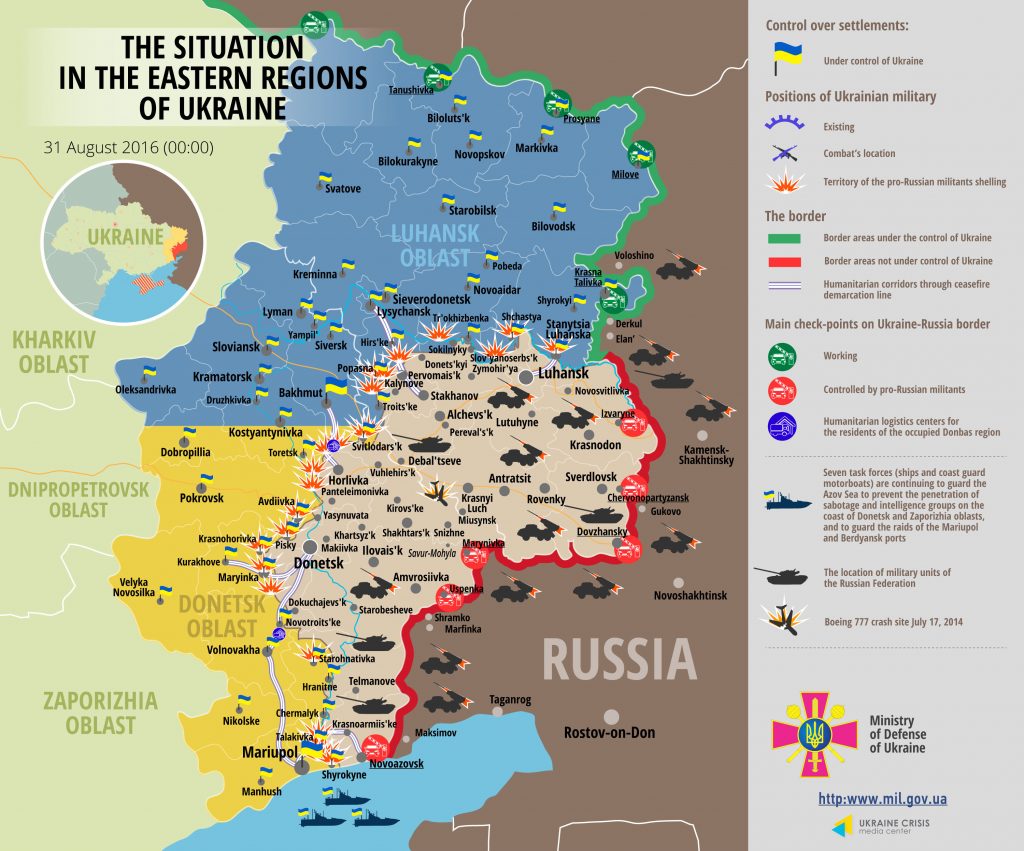 Militants continued mass attacks at Ukrainian positions in the Donetsk sector using heavy weapons. Virtually all the positions and towns on the contact line suffered from such attacks. “The situation was particularly tense from midnight to 7 a.m. when Novhorodske (35 artillery missiles), Verkhniotoretske (90 mortar shells) and Krasnohorivka (54 artillery missiles) came under hostile fire,” elaborated Col. Lysenko.

Ukrainian Armed Forces incurred no losses in combat yesterday, and one Ukrainian serviceman was injured.

Col. Lysenko added that Russian proxies were conducting active aerial reconnaissance. “For instance, a tactical unmanned aerial vehicle (UAV) was observed in responsibility area of so-called 5th and 100th brigade of combined Russian-militant forces; two UAVs were flying from Pravdivka to Ocheretyne and one UAV was registered in responsibility area of militants’ so-called 7th brigade and 9th regiment in the Luhansk and Mariupol sectors,” said the spokesman.

According to the Chief Intelligence Directorate of the Ministry of Defense of Ukraine (CID MDU), a mobile reconnaissance system PRP-4A Argus was found near Huselshchykove village, north of Novoazovsk; another EW system, Infauna signals intelligence system, was observed in the vicinity of the Donetsk airport. “It is the newest Russian military equipment put into service of the Russian army in the last 5-7 years. It is yet another evidence of systematic supply of weapons and military equipment for militants from Russia,” said Col. Lysenko.

Moreover, CID MDU informs that Russian propagandists from the center of informational confrontation located in Novocherkask prepared a system provocations plan “The 1st of September” aimed at accusing ATO troops of violations of the Minsk agreements and international human rights. “Having obtained the agreement of their command, occupants from so-called 9th regiment plan to conduct fire demonstration imitation shooting at schools and school buses on the temporarily occupied territory in Novoazovsk district. It will be filmed by Russian propaganda TV-channels and may be broadcasted in the next few days to discredit Ukrainian troops,” said Col. Lysenko.