The armistice was holding in most areas, with only one case of heavy armor use. Russia-backed militants launched 26 mortar shells at Ukrainian positions. In other areas only small arms were used.

Kyiv, September 1, 2016. The intensity of hostilities in the ATO zone decreased considerably in comparison with August 30. “The armistice held almost in the entire Luhansk sector, at the Svitlodarsk bulge and the Donetsk airport. Moreover, it was the first time in many weeks that the occupants did not use any artillery. They only delivered a brief 3-minutes attack [from small arms] in Stanytsia Luhanska,” said Colonel Andriy Lysenko, spokesman of the Presidential Administration of Ukraine on ATO-related issues, at a press briefing at Ukraine Crisis Media Center. One Ukrainian serviceman was killed in action and one more was injured. 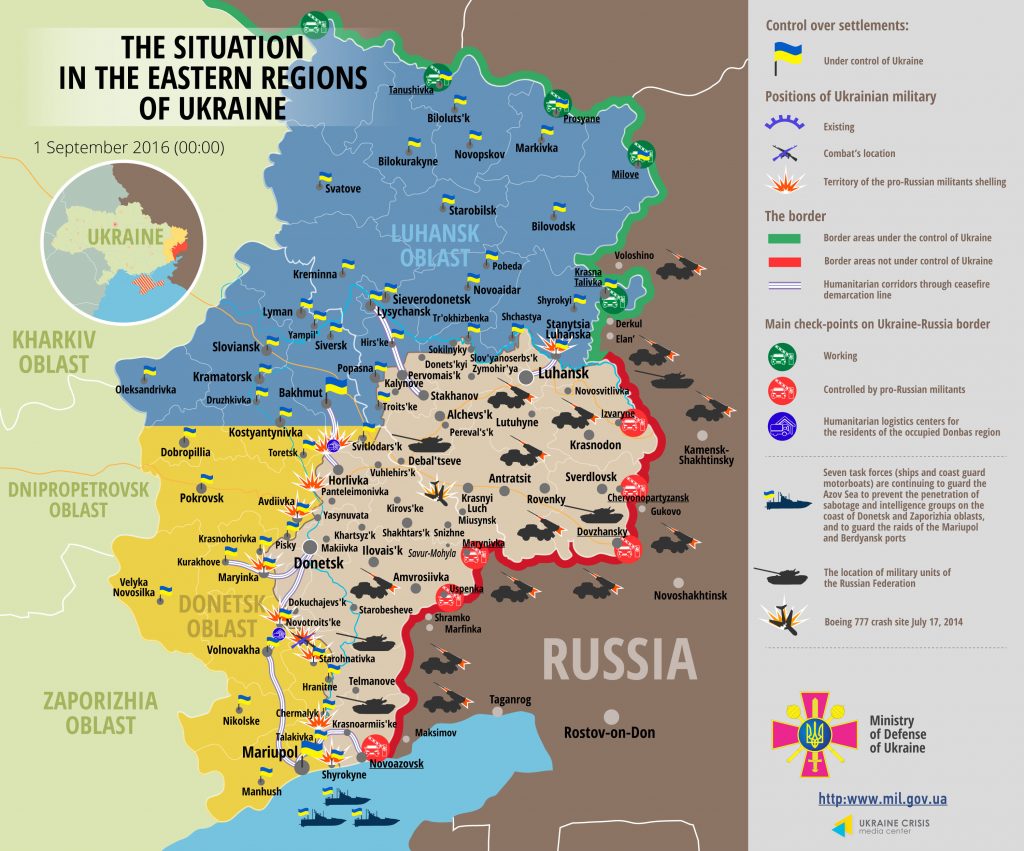 14 militant attacks took place in the Donetsk sector in 24 hours, one involved the use of heavy weapons. “Major hostilities traditionally take place in the Avdiivka industrial area. Militants were shooting at Ukrainian troops virtually from dawn till dusk. One quite intense mortar attack took place, when Russia-backed militants launched 26 mortar shells within an hour,” said Col. Lysenko. Moreover, militants violated the ceasefire in Maiorsk and Verkhniotoretsk. The armistice held in other sectors.

A brief firefight took place in the Mariupol sector near Bohdanivka after 1 a.m. “A hostile group consisting of five militants moved forward from Dokuchaevsk and attacked our troops. The assault was defeated,” elaborated the spokesman. In total, nine attacks took place in the Mariupol sector, only one of them near Starohnativka involved the use of a mortar launcher. “Militants mostly used only small arms, sniper rifles in particular,” said Col. Lysenko.  Such violations of ceasefire were registered in Mariinka, near Dokuchaevsk and in Pavlopil-Shyrokyne frontline area.

Col. Lysenko also informed that the Armed Forces of Ukraine received over one thousand night vision devices from the United States of America. The same number of devices is expected in the nearest future. “Since the beginning of 2016 the USA rendered international technical aid to Ukraine in the amount of USD 62 million and humanitarian aid in the amount of USD 7 million,” said Col. Lysenko.