Kyiv, September 5, 2016. Militants violated the ceasefire 20 times in the ATO zone yesterday, using mortar launchers and armor once. Ukrainian Armed Forces incurred no losses in combat, and one serviceman was injured in Avdiivka, said Colonel Oleksandr Motuzyanyk, spokesman of the Ministry of Defense of Ukraine on ATO related issues at a press briefing at Ukraine Crisis Media Center. “Moreover, four other troops of the Armed Forces of Ukraine and one serviceman of the State Border Guard Service were wounded in Stanytsia Luhanska district as a result of a grenade blast that a medical vehicle incurred. Two other Ukrainian servicemen sustained injuries in Krasnohorivka due to tripping an explosive device,” added the spokesman. 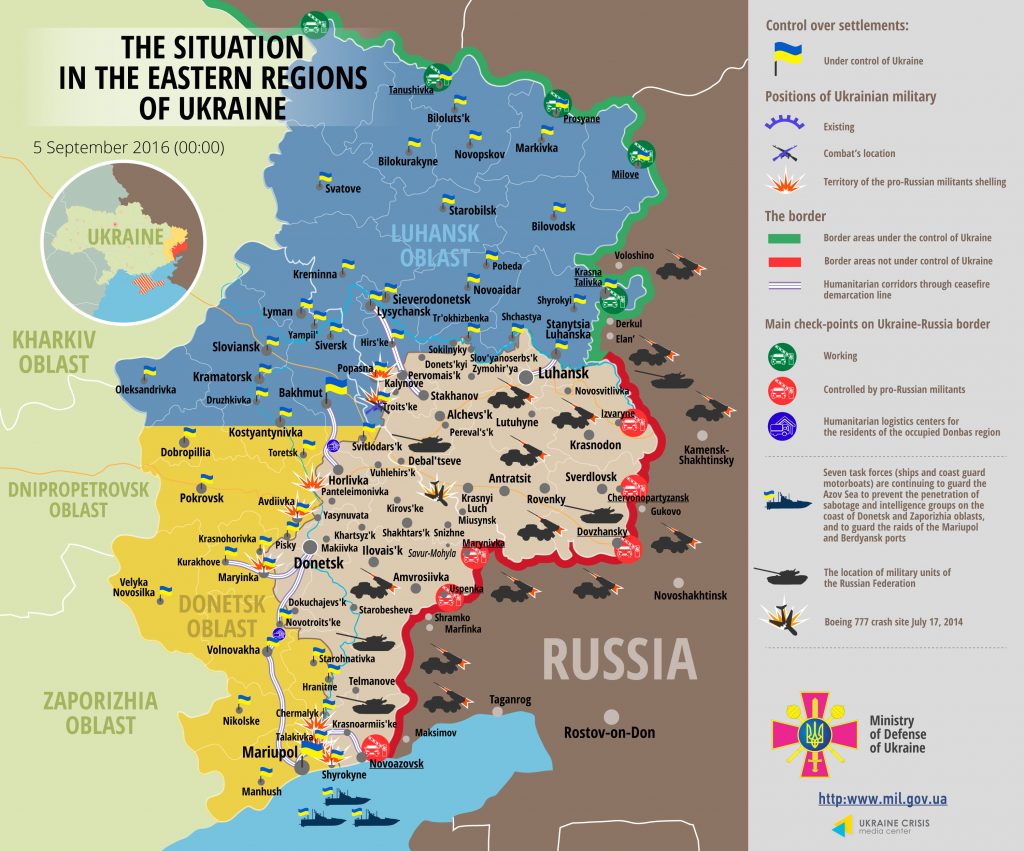 Hostilities escalated in the Avdiivka industrial area in the Donetsk region. Militants were violating ceasefire both during the day and at night. They used a mortar launcher once. “A combat engagement between ATO troops and militants took place yesterday night near Troitske, at the Svitlodarsk bulge. Following a       15-minutes fight, the adversary retreated,” elaborated Col. Motuzyanyk. In total, Russia-backed militant groups attacked six times in the Donetsk sector.

In the Mariupol sector 12 attacks took place – in Marinka and Pavlopil-Shyrokyne frontline area. “Occupants used small arms, grenade launchers and armor,” said the spokesman. Militants made one attack from small arms in Novooleksandrivka in the Luhansk sector yesterday night.

According to the available information, one militant died in the past 24 hours and four were wounded. “The militant who died had blasted his own mine OZM-72 near Sokilnyky in the vicinity of the Bakhmut road,” elaborated Col. Motuzyanyk.

He also informed that the command of self-proclaimed “Luhansk People’s Republic” and “Donetsk People’s Republic” organized staged attacks at militants’ frontline positions in the Donetsk and Mariupol sectors, which were filmed by Russian state media. “Russian propaganda used female militants who were wearing civilian clothes. They were Iryna Verkhovod from so-called 7th brigade and Olena Moskvich from so-called 9th regiment of Russia-backed militant groups. Moreover, identification documents and personal belongings of a Russian citizen Yuliya Novozhylova were used during the filming. She was a militant of so-called 7th brigade and disappeared under unknown circumstances on August 31,” added the spokesman.