Combined Russian-militant troops fire at Ukrainian positions from small arms in Luhansk and Donetsk sectors, a civilian woman was heavily wounded. Heavy weapons were used in the Mariupol sector, where over 60 mortar shells were launched. Military intelligence reports that Russia is building up its military capacity in the east of Ukraine.

Kyiv, September 7, 2016. The Security Service of Ukraine (SBU) prevented terrorist attacks in Luhansk region. “On the instruction of Russian intelligence services’ agent, two inhabitants of Pryvillia planned to blast a monument to Ukrainian troops and a military enlistment office and commit a number of subversive actions against pro-Ukrainian activists during celebration of the Town Day,” said Colonel Andriy Lysenko, spokesman of the Ministry of Defense of Ukraine on ATO related issues at a press briefing at Ukraine Crisis Media Center. SBU officers detained the subversives when they were planting an explosive device. 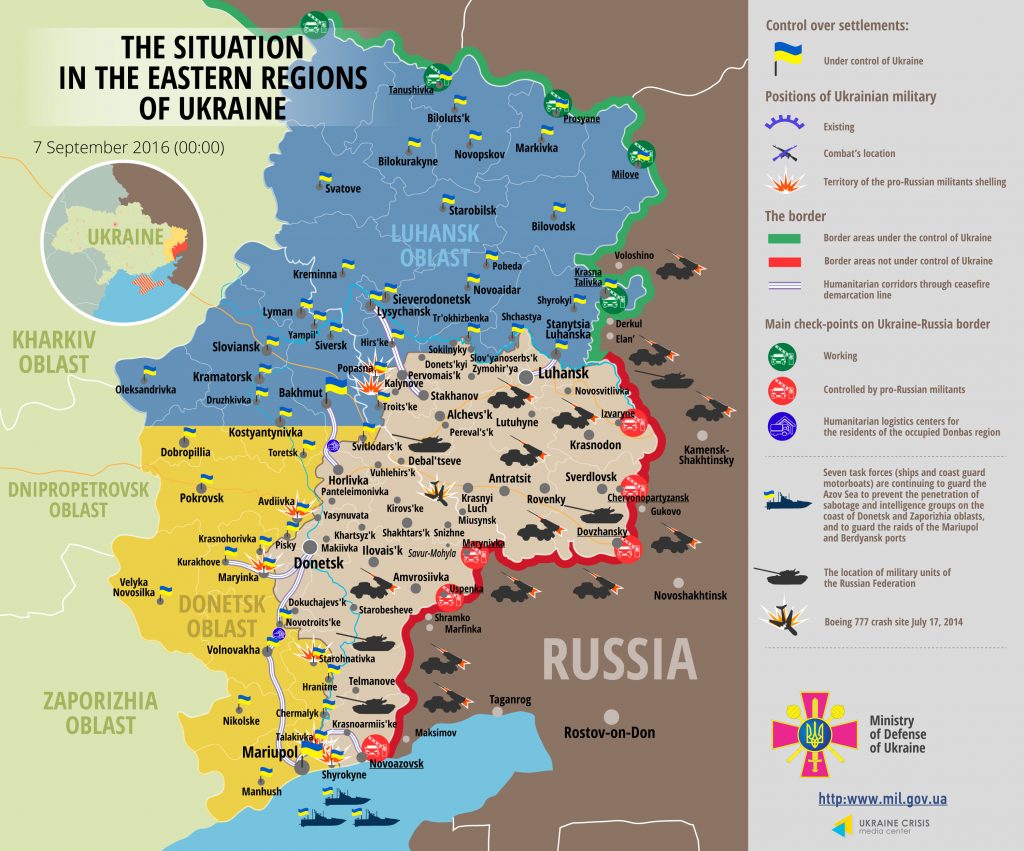 Three militant attacks took place in the Luhansk sector, in Popasna and Novozvanivka, involving use of small arms only.

In the Donetsk sector hostilities continued only in Avdiivka. “Occupants delivered three attacks during the hours of darkness, each 20-30 minutes long. No heavy weapons were used either,” said Col. Lysenko. He added that a woman was heavily injured in the hostile shelling.

Russia-backed militant groups were much more active in the Mariupol sector. Shyrokyne became the epicenter of hostilities; militants shelled it twice – after the dawn and after the sunset. Russian proxies used armor and organized four mortar attacks, launching over 60 mortar shells at Ukrainian positions. “Moreover, occupants violated the ceasefire in Mariinka, Starohnativka and in Vodiane-Talakivka frontline area,” added the spokesman. In total, 15 militant attacks took place in the Mariupol sector in the past 24 hours.

Ukrainian Armed Forces incurred no lethal casualties over the last day, and one serviceman was wounded in action. Confirmed militant losses amount to one dead and four injured militants. “Several Russian contract soldiers refused to go to Donbas because of the losses in militants’ ranks in Donbas and problems with medical assistance. These were the troops from the 18th separate motorized rifle regiment, home base – Chechnia,” said Col. Lysenko.