Kyiv, September 9, 2016. The situation in the ATO zone was the most restless in the Mariupol sector yesterday. 11 militants’ attacks took place there in the past 24 hours, five of them involved use of heavy armor. “The occupants were especially active in Vodiane-Shyrokyne frontline area. It was the first day in eight days, from the day of armistice announcement, that militants used 122-mm barrel artillery. Moreover, a number of mortar attacks took place on these strongholds. About 60 mortar shells were launched at our positions,” said Colonel Andriy Lysenko, spokesman of the Ministry of Defense of Ukraine on ATO related issues at a press briefing at Ukraine Crisis Media Center. The situation in Mariinka was restless as well, as militants opened fire at Ukrainian troops’ positions several times between 6 and 10 p.m. 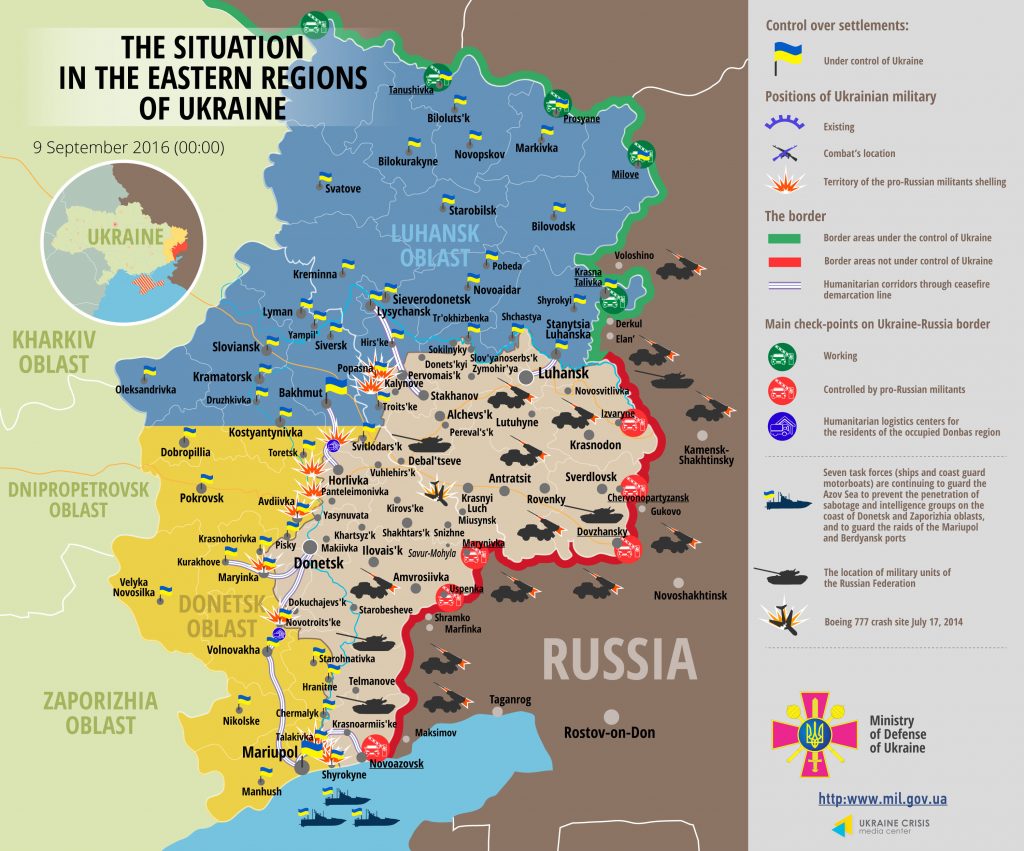 Militants violated the armistice seven times in the Donetsk sector in the vicinity of Horlivka – near Zaitseve, Novhorodske, Verkhniotoretske and the Avdiivka industrial area. “Almost all the Russian proxies’ provocations took place in the afternoon and continued 10-60 minutes. No heavy armor was used,” said the spokesman. A number of minor provocations took place in the Popasna district of the Luhansk sector. Militants’ snipers were shooting twice. Col. Lysenko also said that eight militants’ unmanned aerial vehicles were observed in the ATO zone.

One Ukrainian serviceman died in combat yesterday and two were wounded near Mariinka.

According to the military intelligence, another batch of reinforcement arrived for militants from Russia. “12 fuel tanks with combustible and lubrication materials were brought to Rovenky station, and eight T-80 tanks, 10 armored fighting vehicles and five trucks arrived at Snizhne,” elaborated the spokesman. He also informed that militants of self-proclaimed “Luhansk People’s Republic” (“LPR”) yesterday denied access to SMM OSCE monitors to Pionerske in Luhansk region near Russian border yet again. “OSCE mission cannot get access to the village for several weeks in succession,” reminded Col. Lysenko.

Moreover, several incidents among militants were reported. A 32-year-old Artem Osanov from so-called 100th brigade, being under influence of alcohol, attacked a Russian officer and wounded him. A 28-year-old Hennadiy Biednov from Voroniezh who belonged to the ranks of the so-called 9th regiment was wounded during the desertion attempt on September 7. A 40-year-old Aleksandr Kovaliov from so-called 7th brigade, suffering from nervous breakdown, shot a 29-year-old Ivan Churin dead. The casualty, originally from Moscow, served in the ranks of Russia-backed militants. “The command wrote Churin off as a suicide in order to cover this sad incident,” said the spokesman.