Russia-backed militant groups violate the ceasefire in all three sectors 30 times in the last 24 hours. They mostly use small arms, mortar launchers and machine guns.

Kyiv, September 11, 2016. The situation in the ATO zone has been showing signs of certain deescalation and remains under control. “Ukrainian Armed Forces are holding positions in the frontline. Nevertheless, militants continue instigating armed provocations, mostly using small arms,” informed Colonel Oleksandr Motuzyanyk, spokesman of the Ministry of Defense of Ukraine on ATO related issues at a press briefing at Ukraine Crisis MediaCenter. 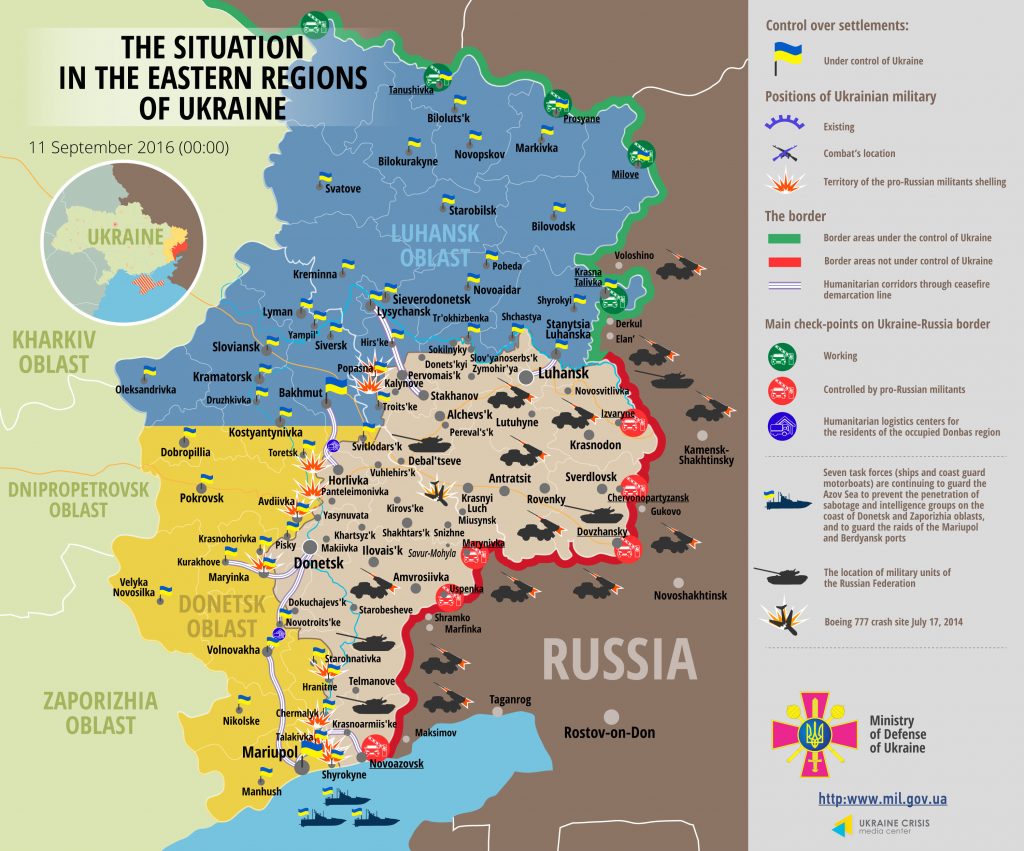 Militants instigated provocations in the vicinity of Novozvanivka in the Luhansk sector, mostly using small arms, machine guns, grenade launchers and anti-aircraft mount once. “Moreover, the enemy launched one mine from 120-mm mortar launcher prohibited by the Minsk agreements. Another provocation took place near Popasna. It lasted only one minute,” said the spokesman.

Russia-backed militant groups opened fire from heavy armor, namely 82-mm mortar launcher, once near Avdiivka in the Donetsk sector. According to Col. Motuzyanyk, more than a half of incidents involving opening fire by Russian proxies took place in the vicinity of Avdiivka, three of them – on the outskirts of Horlivka near Novhorodske and Verkhniotoretske.

Militants opened disturbing fire from small arms, machine guns and grenade launchers near Hranitne, Vodiane, Mariinka, Talakivka, Pavlopol and Shyrokyne. “Russia-backed militant groups launched eight mortar shells from 82-mm mortar launched during the hours of darkness near the latter. All the other provocations involved use of small arms, some of them took place after 6 p.m.,” said Col. Motuzyanyk.

Russia-backed militant groups violated the ceasefire in all three sectors 30 times in the last 24 hours: six times in the Luhansk sector, 10 times in the Donetsk sector and 14 times in the Mariupol sector. Ukrainian Armed Forces incurred no losses in combat, and one soldier was injured near Vodiane village.