A short firefight between militants and Ukraine’s forces occurs on Ukraine’ controlled territory. The number of ceasefire violations decreased, yet they became more intense. Ukraine suffers unusually high number of casualties and wounded.

Kyiv, September 13, 2016. Ukrainian forces and militants of the self-proclaimed ‘republics’ engaged in a firefight in the Luhansk sector. It happened near the village of Artem in Stanytsia Luhanska area, on the left bank of Siversky Donets river, controlled by the Ukrainian forces. “The enemy’s subversive reconnaissance group crossed the river and attacked our soldiers. The combat lasted for 15 minutes,” said Colonel Oleksandr Motuzyanyk, Ministry of Defense spokesperson on ATO related issues at a press briefing in Ukraine Crisis Media Center. Additionally, militants continued systematic and intense shelling of Ukrainian positions in Popasna area. They violated the ceasefire twice, with one shelling taking place between midnight and 2 a.m. and the second between 11 a.m. and 5:30 p.m., using small arms and an armored vehicle. Illegal armed groups also fired from an 82-mm mortar, for the first time in this area over the last weeks. In total, the militants violated the ceasefire nine times in this sector, including one from heavy weapons, and one combat engagement took place. 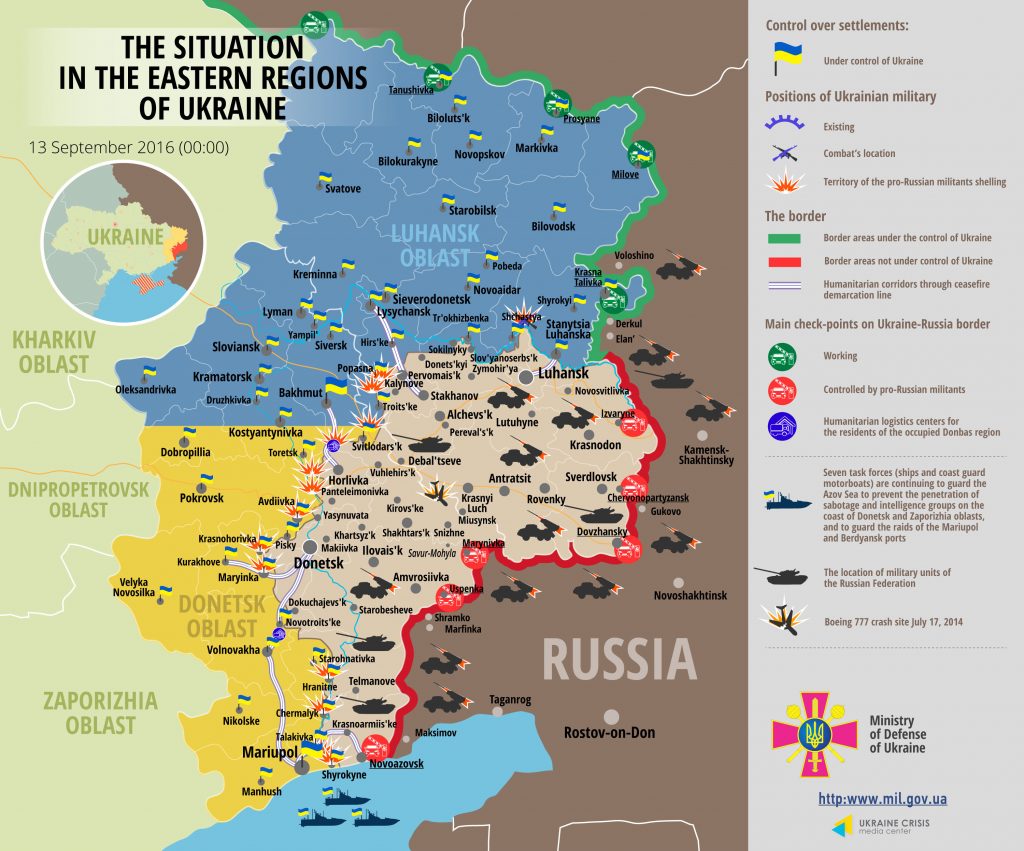 Ukrainian forces lost three soldiers in action, 15 more were wounded, and one soldier is missing. According to the intelligence reports, two militant died in the past 24 hours and four were wounded.

The militants used heavy weapons in three flashpoints in the Mariupol sector. For instance, they fired from mortar in Krasnohorivka and Shyrokyne and from 122-mm artillery in Chermalyk. “The heaviest shelling took place in Chermalyk. Over less than an hour they fired 45 shells at the Ukrainian positions,” emphasized the MOD spokesperson on ATO related issues. A number of militants’ provocations took place in Maryinka and some other sections of the frontline. In total, nine militants’ attacks took place in the Mariupol sector, three of which involved the use of heavy weapons.
Additionally, 3 militants unmanned aerial vehicles (UAVs) were spotted in the ATO zone, one of them in the Donetsk sector and two more in the Mariupol sector.

Col. Motuzyanyk said that the militants received one more batch of weapons and equipment from Russia. According to him, the military convoy entered through Izvaryne and headed in the direction of Luhansk. There were infantry combat vehicles, armored personnel carriers and trucks carrying artillery on trailers.