Insurgents launch over 200 mortar shells within two hours in the Donetsk sector. They shoot from 152-mm cannons near Zaitseve, killing one serviceman. Aerial reconnaissance involving use of UAVs continues from the territory of Russia.

Kyiv, September 14, 2016. Hostilities escalated in the ATO zone, especially in the Donetsk sector, said Colonel Andriy Lysenko, spokesman of the Ministry of Defense of Ukraine on ATO related issues at a press briefing at Ukraine Crisis Media Center. According to the Chief Intelligence Directorate of the Ministry of Defense of Ukraine, Russian General Staff commanded militants to cease fire completely from September 15, 2016. “Taking advantage of the opportunity, command of the Russian occupational troops decided to increase the number of attack at ATO troops’ positions significantly before the stated deadline,” said Col. Lysenko. 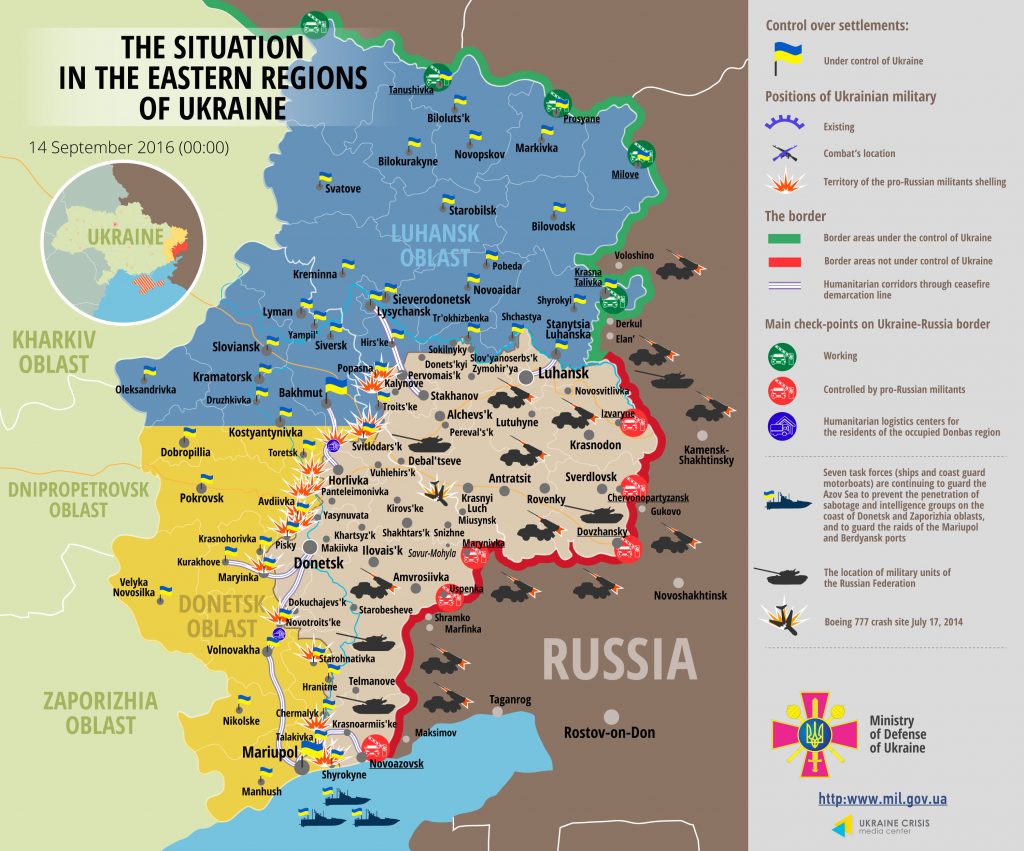 Active hostilities started in the Donetsk sector along the entire frontline. “The situation since the beginning of the day till approximately 2 p.m. was the most difficult in Luhanske where the adversary conducted two extremely intense mortar attacks, launching over 200 mortar shells within two hours. Militants were shooting almost non-stop in the Avdiivka industrial area for five hours,” said the spokesman. The situation deteriorated significantly after 6 p.m. Mortar launchers and 122-mm cannons were used in Luhanske, the same as in the morning, and Butovka coal mine position and Pisky were shelled from mortar launchers. In total, 27 militants’ attacks took place in the Donetsk sector in 24 hours, 19 of them involved use of heavy armor.

One Ukrainian serviceman died in combat yesterday and another one was injured. “It happened in Zaitseve as a result of hostile attack from Giatsynt-B 152-mm cannons,” elaborated Col. Lysenko.

The biggest number of militants’ attacks in the Mariupol sector took place in Mariinka where hostile snipers were working several times. Moreover, Russia-backed militant groups used mortar launchers twice in the south – in Berdianske and Lebedynske. Militants were shooting from the temporarily occupied Sakhanka. The situation was calmer in Shyrokyne in comparison with the previous days, no heavy armor was used. In total, militants attacked 14 times in the Mariupol sector yesterday, in particular two mortar attacks and three sniping attacks.

Three flights of militants’ unmanned aerial vehicles took place. Two incidents were registered in the Donetsk sector. Col. Lysenko emphasized that one of them had been launched from the territory of Russia. Another UAV was observed in the Mariupol sector.