The biggest number of attacks took place in the Donetsk sector. In the Mariupol sector, there were no areas in the frontline where the armistice held. New weapon caches found.

Kyiv, September 17, 2016. Militants violated the ceasefire across the entire boundary line yesterday; the biggest number took place in the Donetsk sector. One Ukrainian serviceman died in combat and six troops were wounded, informed Colonel Oleksandr Motuzyanyk, spokesman of the Ministry of Defense of Ukraine on ATO related issues at a press briefing at Ukraine Crisis Media Center. “Russia-backed militant groups used no heavy armor, so there is certain tendency towards de-escalation. Nevertheless, it is a far cry from total ceasefire,” said Col. Motuzyanyk. 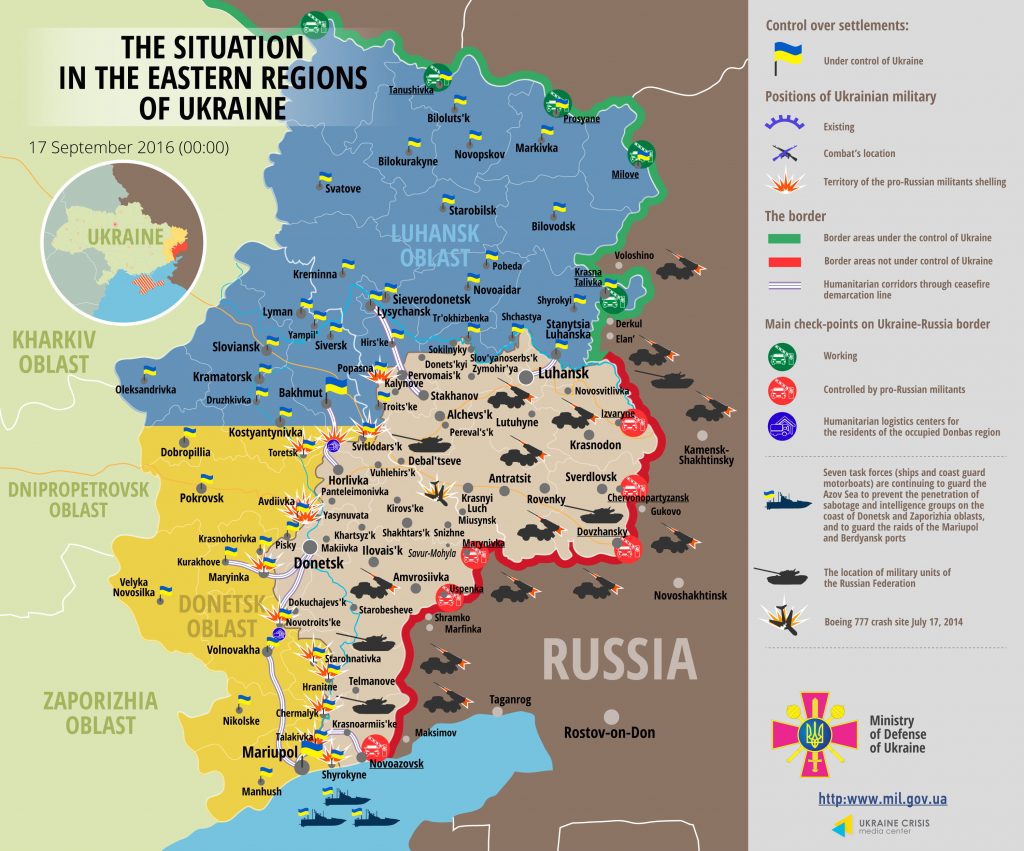 Militants violated the ceasefire 16 times in the Donetsk sector yesterday. “Traditionally, the biggest number of attack took place in the Avdiivka industrial area. Occupants violated the ceasefire both during the day and at night. One attack involving use of sniping fire took place,” informed Col. Motuzyanyk. Moreover, militants opened fire at the Svitlodarsk bulge, in Zaitseve-Toretsk and in Kamianka. The armistice held only in the Donetsk airport, in Opytne-Pisky frontline area.

Russia-backed militant groups conducted 10 attacks in 24 hours in the Mariupol sector. “There are no areas in the frontline where the armistice stands. Occupants violated the ceasefire virtually in all the key defense points of ATO troops – from Mariinka to Shyrokyne,” said the spokesman. Snipers were active in Hranitne and Chermalyk. Moreover, flight of one militants’ unmanned aerial vehicle was registered.
Russia-backed militant groups violated the ceasefire in Novooleksandrivka of Popasna district four times.

The spokesman also informed that two weapons caches were wound in the ATO zone. For instance, four RGD-5 grenades with fuses and large number of cartridges were found on inhabitant of Krasnohorivka. Another cache was located in the loft of an abandoned building in Pavlopol. Four hidden grenade launchers PRG-26 were found there. Col. Motuzyanyk added that two local inhabitants died in Avdiivka while attempting to dismantle a rocket-propelled flame-thrower they had found. “We are calling upon the citizens to be cautious and report any dangerous findings to law enforcement staff,” he emphasized.