Number of militants’ armed provocations decreases, heavy armor is used only once in the Donetsk sector. Security Service of Ukraine finds two weapons caches in the ATO zone.

Kyiv, September 21, 2016.  “No Ukrainian servicemen were killed or injured in combat in the past 24 hours,” informed Colonel Oleksandr Motuzyanyk, spokesman of the Ministry of Defense of Ukraine on ATO related issues at a press briefing at Ukraine Crisis Media Center. Generally, the situation in the ATO shows the signs of certain de-escalation, as the number of militants’ armed provocations decreased and reached the level of early September. “The issue of ceasefire will also be discussed during the meeting of trilateral contact group in Minsk today,” said the spokesman. 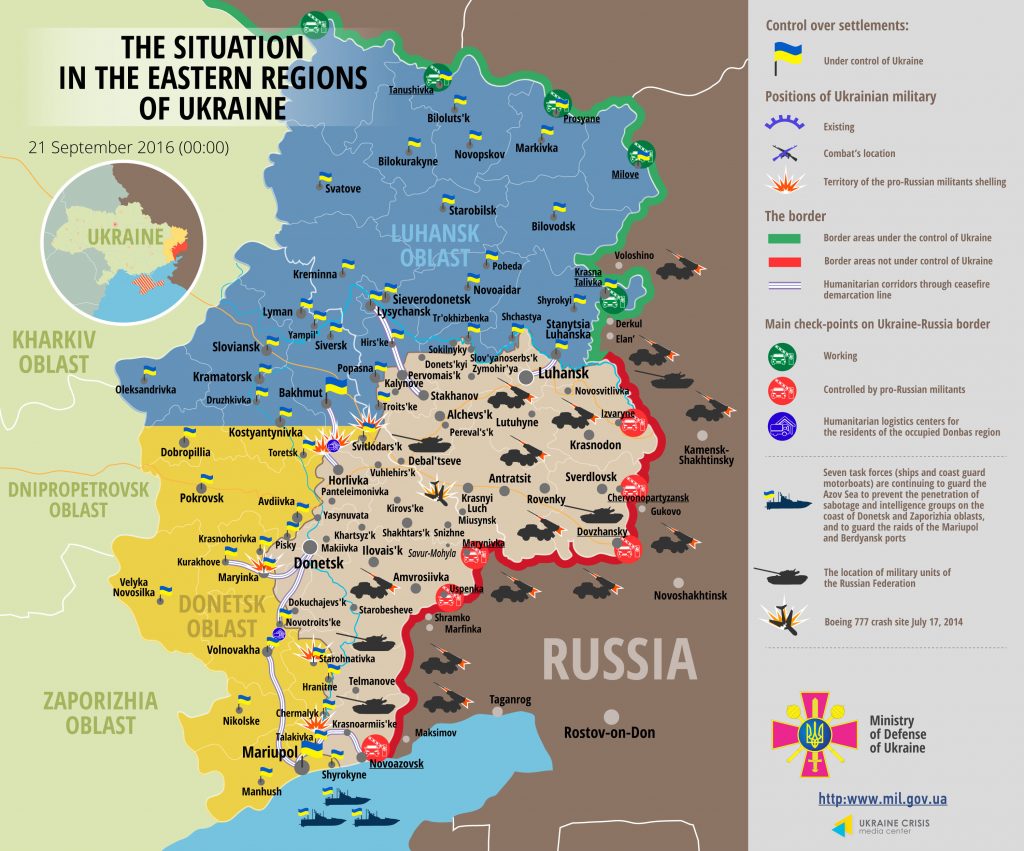 Absolute armistice held in the Luhansk sector, no militants’ provocations were registered.

In the Donetsk sector it was the first time in many days that no provocations were instigated in the vicinity of Avdiivka, near the Donetsk airport and the adjacent settlements. “Nevertheless, militants opened fire on the outskirts of Horlivka – near Maiorsk and Zaitseve – and in the vicinity of Luhanske settlement at the Svitlodarsk bulge,” said Col. Motuzyanyk. Russia-backed militant groups used small weapons and shot from armored personnel carrier near Luhanske and Zaitseve. “The enemy used heavy armor only once, shooting one mortar shell from 120-mm mortar launcher,” said Col. Motuzyanyk. In total, insurgents violated the ceasefire five times in the Donetsk sector.

Russian-backed insurgents used no heavy armor in the Mariupol sector. Armed provocations took place in Mariinka and Starohnativka, involving use of heavy armor. “Militants were shooting from armored personnel carrier on the night of September 19-20. Another armed provocation from small arms was registered near Pavlopol,” informed the spokesman. In total, militants violated the ceasefire eight times in the Mariupol sector.

According to Ukrainian military intelligence, “Russia continues supplying their proxies in the east of Ukraine with weapons and military equipment”. 150 tons of ammunition for self-propelled artillery mounts and 70 tons of missiles for Grad multiple rocket launchers arrived at Debaltseve. Three T-64 tanks, seven trucks, four Tigr armored vehicles and five fuel tanks with combustible and lubrication materials came to Donetsk. 27 refueling systems were bought to Amvrosiivka. “Russia is bringing supplies into Luhansk region as well. “For instance, six tanks on platforms from Ilovaisk moved towards Khartsyzk and 12 fuel tanks with diesel were transported to Rovenky,” said the spokesman.

According to Col. Motuzyanyk, the Security Service of Ukraine found two weapons caches in the ATO zone. Field investigators jointly with police officers seized two grenade launchers, hand grenades and large number of 7.62 cartridges from a resident of Zaporizhzhia region which he was trying to hide in his private vehicle. “Moreover, intelligence services found a weapons cache with one thousand cartridges for automatic weapons near Lyman in Luhansk region. According to the preliminary information, the cache belonged to militants,” added Col. Motuzyanyk.