As situation in the eastern Ukraine demonstrates signs of de-escalation, diplomats agree to disengage forces at the meeting of Trileteral Contact Group.

Kyiv, September 22, 2016. Yesterday the Ukrainian side reached new agreements within the framework of the Trilateral Contact Group in Minsk. According to the Ukrainian officials, in the next 13 days forces nerby Stanytsa Luhanska, Zolote and Petrovsky will disengage to prevent fire from small arms. “All previous agreements should be performed. In particular, on full and sustainable ceasefire and pool-out of heavy weapons by militants, including artillery and mortars. In case of keeping ceasefire by the Russia-backed militants, the number of points on the contact line with disengaged forces can be extended,” said Colonel Andriy Lysenko, spokesman of the Ministry  of Defense of Ukraine on ATO related issues at a press briefing at Ukraine Crisis Media Center. 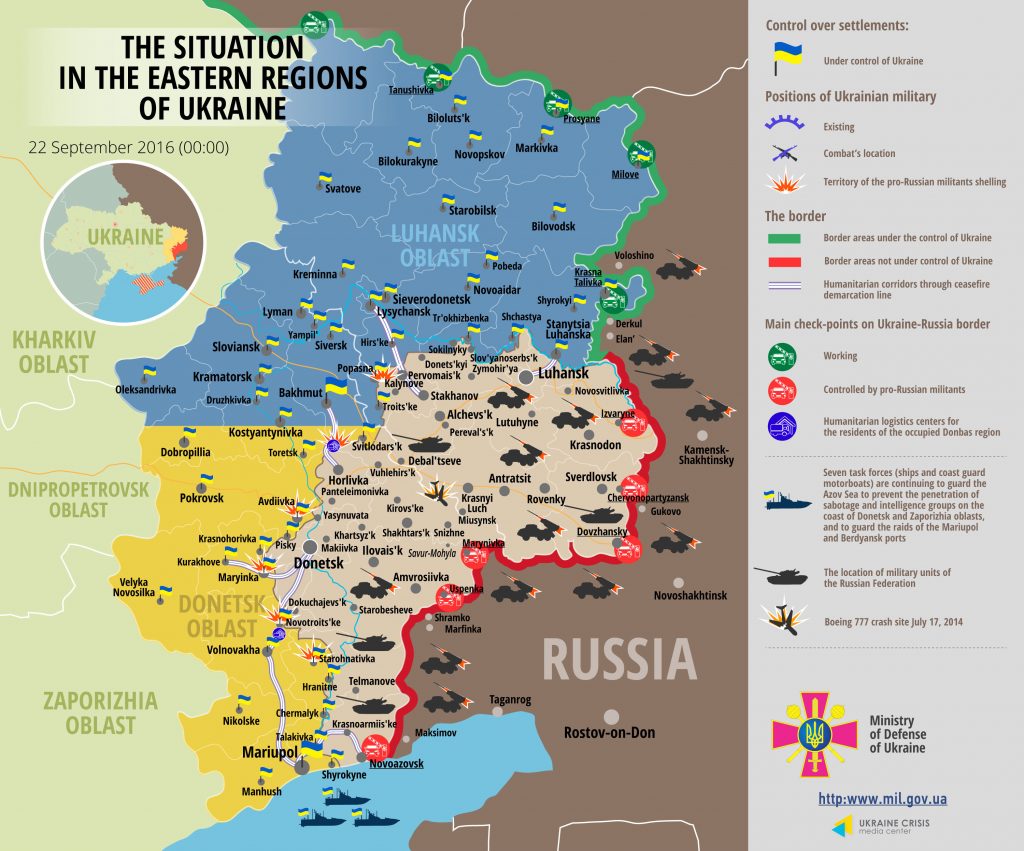 The situation in the ​​ATO zone retains signs of de-escalation. Militants carried out sporadic armed provocations with the use of small arms. In the Lugansk sector militants opened fire once with small arms near Novooleksandrivka.

In the Donetsk sector ceasefire was kept almost on the entire area. The exception is Avdiivka, where militants used small weapons in the provocation that took place from 2 pm to 11 nights. “Late at night, on 20 to 21 September, militants fired two mortar mines with 120-millimeter mortars near Zaitseve,” said the spokesman of MDU on ATO related issues. In the same area the work of checkpoint was temporarily stopped for disposal of unexploded mine. Now it functions normally.

No Ukrainian servicemen were killed yesterday. One Ukrainian soldier was wounded in a result of undermining on the explosive device.

In the Mariupol sector illegal armed groups violated the ceasefire, mostly in the night-time. “Five provocations took place near Marinka, two more at Novotroitske and one near Starohnativka,” said Colonel Lysenko. Only small weapons were used.

The Security Service of Ukraine detained one more militants’ informer. Toretsk citizen of Donetsk region was recruited by militants in the spring of 2014 in the course of anti-Ukrainian protests in the city. “The criminal gave information of places of deployment of Ukrainian military forces, its composition and technology with the help of social services,” said the spokesman of MDU on ATO relted issues.