Kyiv, September 29, 2016. Militants’ attacks in Stanytsia Luhanska complicate implementation of agreements on the parties’ troops and weapons disengagement in this area, informed Colonel Oleksandr Motuzyanyk, spokesman of the Ministry of Defense of Ukraine on ATO related issues at a press briefing at Ukraine Crisis Media Center. Small weapons and armor were used during the attacks. In the Luhansk sector militants traditionally violate the ceasefire in Stanytsia Luhanska and in Popasna district. “Occupants mostly fire during the hours of darkness, between 7:30 and 11:30 p.m. In total, nine hostile attacks took place in the Luhansk sector yesterday,” said the spokesman. 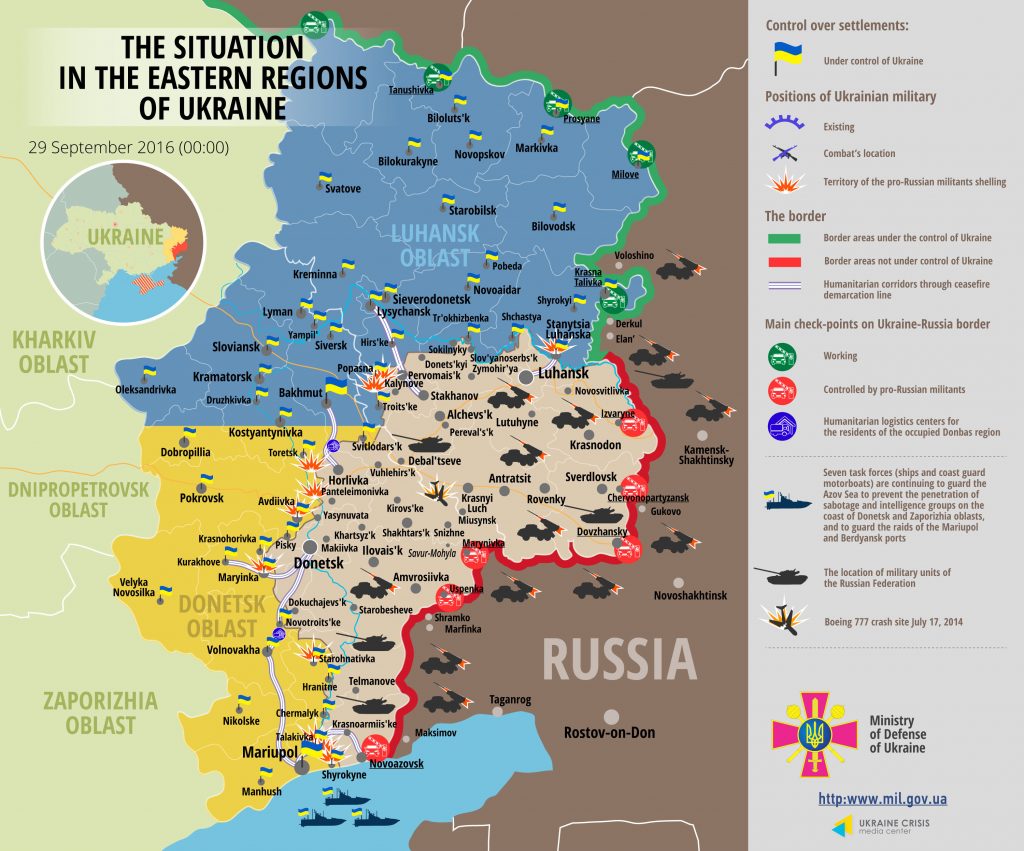 Militants opened fire at Ukrainian positions in Novhorodske-Avdiivka frontline area in the Donetsk sector. “The armistice fully held in other areas – at the Svitlodarsk bulge, in Zaitseve and near Donetsk airport,” added Col. Motuzyanyk. Militants were shooting in Novhorodske virtually non-stop for two hours, using armored personnel carriers (APCs) and anti-aircraft mounts. The biggest number of insurgents’ attacks took place in Avdiivka. In this area that Russia-backed insurgents were shooting from a mortar launcher, firing eight mortar shells. In total, militants conducted eight attacks in the Donetsk sector yesterday.

One Ukrainian serviceman died in combat, and two were injured in the past 24 hours.

Owing to the efforts of the Ministry of Defense of Ukraine, volunteers and the U.S. Embassy, the Armed Forces of Ukraine will receive 7000 books. It is a part of psychological rehabilitation for servicemen. According to Col. Motuzyanyk, the books had been chosen with the assistance from the Chief Administration of psychological and moral support of the Armed Forces of Ukraine, military psychologists, chaplains and independent experts. “The books will help soldiers take a rest from their daily routine, improve their morale and support spiritual development. These books will be taken to the frontline positions soon,” said Col. Motuzyanyk.