Kyiv, September 30, 2016. “The President of Ukraine Petro Poroshenko brought into effect the Resolution of the National Security and Defense Council “On immediate measures regarding financing the needs of the national security and defense of Ukraine in 2016,” informed Colonel Andriy Lysenko, spokesman of the Ministry of Defense of Ukraine on ATO related issues at a press briefing at Ukraine Crisis Media Center. The documents envisages increase in budget funding for the needs of military components, law enforcement bodies, special and intelligence services of Ukraine, which should bereflected in the draft state budget for 2017. 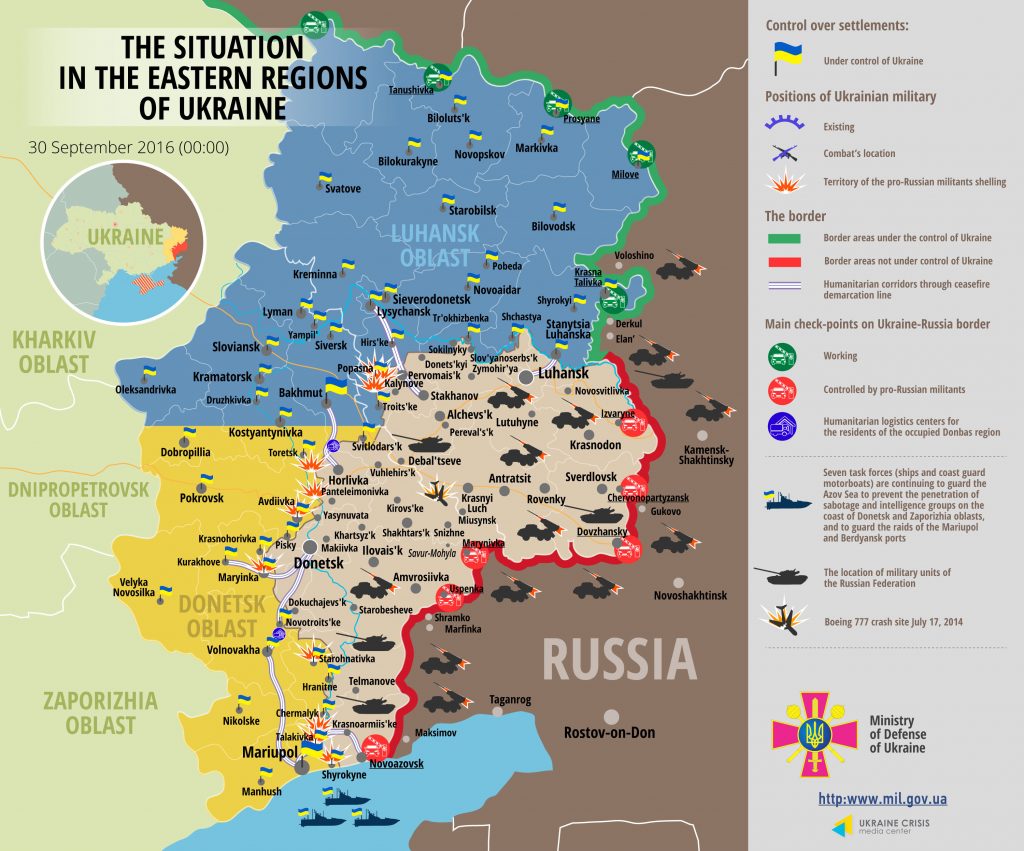 In the Luhansk sector militants shelled Ukrainian troops in the Popasna district only – in Novozvanivka, Novooleksandrivka and Popasna. “The enemy was shooting both during the day and at night, but the most intense attacks took place between 5 and 7 p.m. Occupants mostly used small weapons, but one brief mortar attack by militants was registered as well,” said Col. Lysenko. A flight of insurgents’ unmanned aerial vehicle was observed in the vicinity of Stanytsia Luhanska. In total, 12 militants’ attacks took place in the Luhansk sector yesterday.

Russian proxies attacked in Novhorodske, Verkhniotoretske and Avdiivka in the Donetsk sector. The armistice held in other frontline areas. “The biggest number of attacks was registered in the Avdiivka industrial area where militants were shooting from a mortar launcher late in the afternoon, launching 10 mortar shells,” said Col. Lysenko. In total, militants conducted 11 attacks in the Donetsk sector in the past 24 hours.

Ukrainian Armed Forces incurred no losses in combat yesterday, and three troops were injured. It happened in Verkhniotoretske as a result of a shelling.

In the Mariupol sector militants were shooting at Ukrainian positions in Mariinka, Starohnativka and in Talakivka-Shyrokyne frontline area, using light weapons and an armored personnel carrier. Almost all the armed incidents took place in the afternoon. The total number of militants’ attacks in the Mariupol sector reached 10 incidents yesterday.