Militants continue attacks in all the sectors and receive more military equipment as Ukraine suffers casualties. 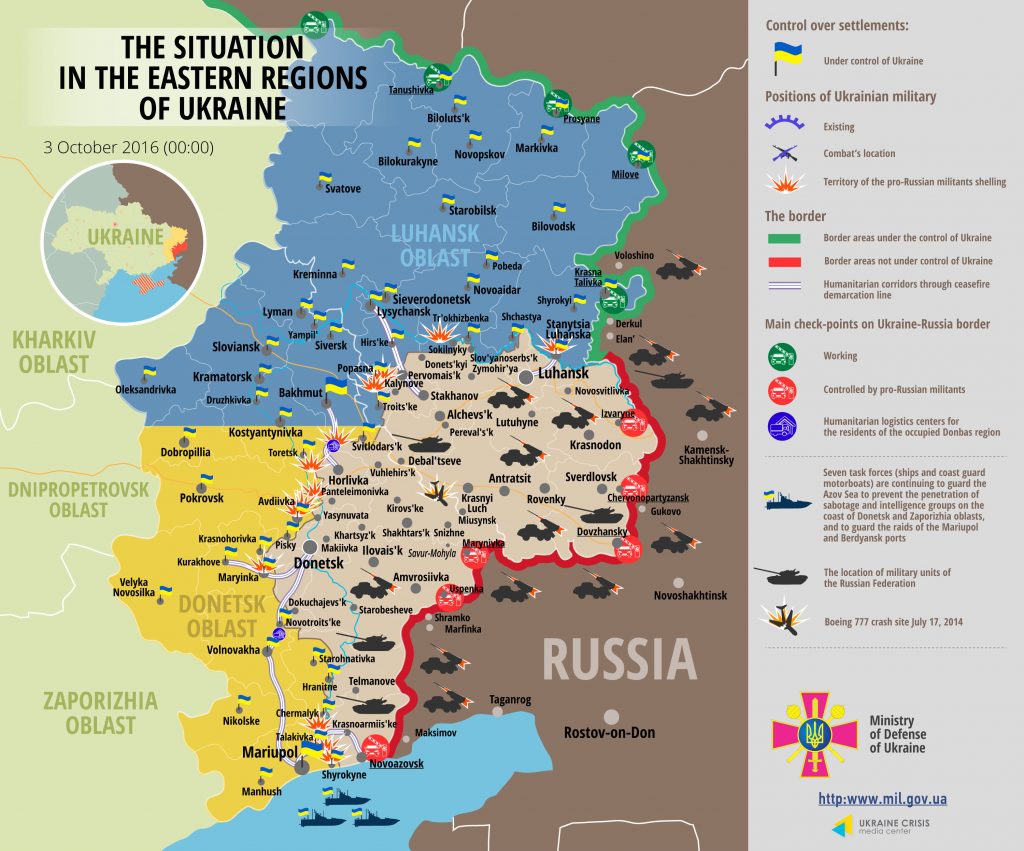 Militants expand places of their military actions and actively use heavy weapons that threaten the plan of disengagement of forces and measures of the parties on certain parts of the contact line. In the last 24 hours one Ukrainian military was killed in action, two were wounded in action.

In Stanytsa Luhanska and Popasna area militants fired only at nighttime. After 11 p. m. militants used mortars twice in Novooleksandrivka, but these attacks were not as intensive as in Krymske. In total, militants made 16 attacks in the Luhansk sector yesterday, six from heavy weapons.”In vicinity of Shchastia two flights of unmanned aerial vehicles were registered,” added Colonel Lysenko.

In the Donetsk sector there are ongoing hostilities in the vicinity Zaitseve – Avdiyivka. “In Zaitseve the occupants fired with 152-mm cannons and used mortar. In Avdiyivka two sessions of active hostilities took place: between 1 p.m. and 2p.m., and between 5 p. m. and 10 p. m.. The enemy used mortars and tank,” said Col. Andriy Lysenko. Beside this, insurgents violated the truce in Novgorodske and Verhnotoretske. In Svitlodarsk bulge and Donetsk airport silence was kept. In total in the Donetsk sector 12 militants’ attacks took place, three of them from heavy weapons.

In the Mariupol sector militants continue shelling Ukrainian positions in Maryinka and at the front sector Pavlopil – Shyrokyne. “In addition to various types of small arms, the occupants used infantry fighting vehicles (IFV),” added Colonel Lysenko. Ukrainian soldiers opened fire in response. In total, Russia-backed militants conducted 20 attacks in the Mariupol sector in the past 24 hours. In the Kirovsk area the activity of electronic surveillance of militants was registered.