Kyiv, October 5, 2016. Ukrainian Armed Forces incurred no casualties in combat in the past 24 hours, informed Colonel Andriy Lysenko, spokesman of the Ministry of Defense of Ukraine on ATO related issues at a press briefing at Ukraine Crisis Media Center

The number of militants’ ceasefire violations drastically increased in the Luhansk sector. Russia-backed militants conducted six times more attacks than the day before – 26 attacks, 32 of them took place in the Popasna area. Attacks started in the afternoon there and lasted till late night. “The enemy launched over 140 mortar shells and 17 artillery missiles in Popasna in the past 24 hours; militants opened fire from armored personnel carrier three times and hostile snipers were active twice,” said Col. Lysenko. Insurgent decreased the combat activity after the midnight, but continued shelling from mortar launchers. Militants violated the ceasefire in Stanytsia Luhanska three times, opening fire from grenade launchers and small arms. “Another armed provocation took place in Triokhizbenka,” added the spokesman. 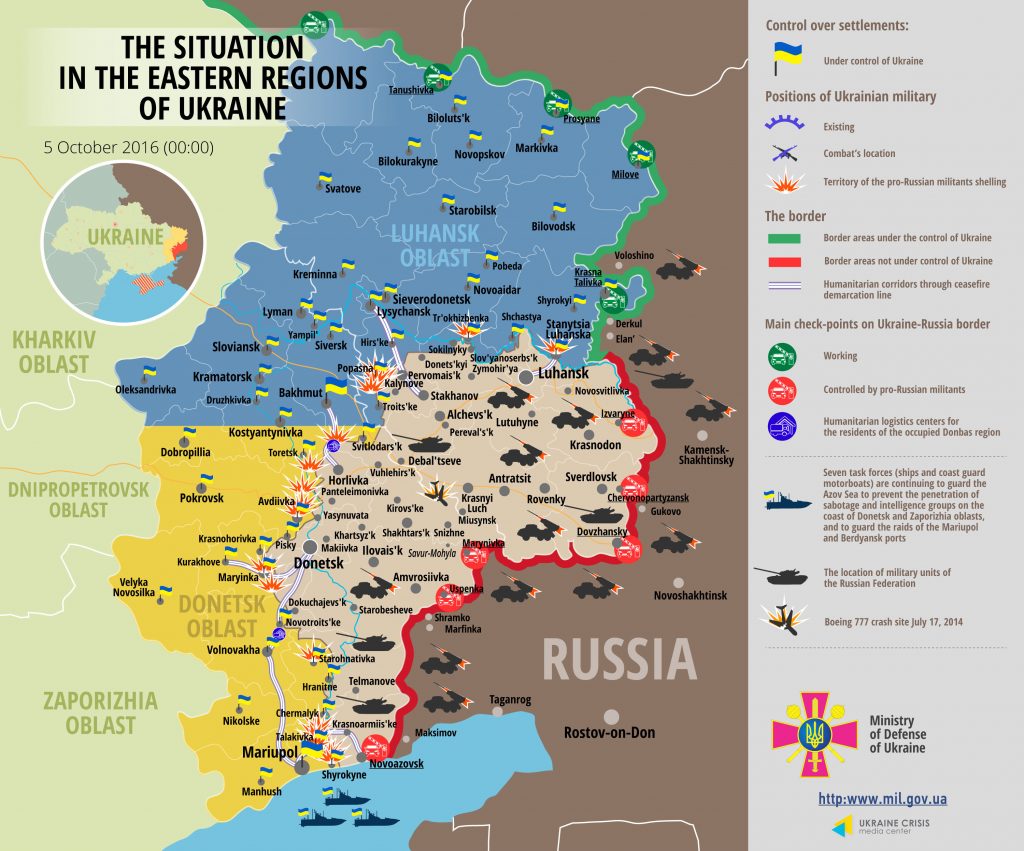 Militants shelled Ukrainian positions in Mariinka and Starohnativka and in the Pavlopil-Shyrokyne firefight line. Together with small arms, militants used mortar launchers in Talakivka, launching 10 mortar shells. An attack from APC took place in the same area. In total, militants violated the ceasefire 19 times in the past 24 hours in the Mariupol sector. “Moreover, a flight of one militants’ unmanned aerial vehicle was registered there, and a sniper was active in Mariinka,” said Col. Lysenko.

According to the Chief Intelligence Directorate of the Ministry of Defense of Ukraine, one militant was heavily injured and three died from so-called “7th separate motorized rifle brigade” as a result of tripping a mine. Moreover, military intelligence informs that Russia is actively recruiting volunteers for participation in combat in Syria on the temporarily occupied territories in Donbas. “They offer several thousand US dollars per month which is an unimaginable amount in circumstances of economy collapse in self-proclaimed “Luhansk people’s republic” and “Donetsk people’s republic”,” said the spokesman.