Kyiv, October 7, 2016. In the Luhansk sector militants used heavy weapons again, before dawn for about 30 minutes they fired mortar shells at Novozvanivka. They fired more than 40 mortar shells, informed Colonel Andriy Lysenko, spokesman of the Ministry of Defense of Ukraine on ATO related issues at a press briefing at Ukraine Crisis Media Center. “Generally, the situation remains unchanged. The enemy continues to violate the ceasefire near Stanytsia Luhanska and Popasna area. Also there was enemy fire in Orihove, Bahmutska Road,” said Col. Lysenko. In just the past day in the Luhansk sector nine attacks of militants took place, including one mortar and wtwo sniper ones. 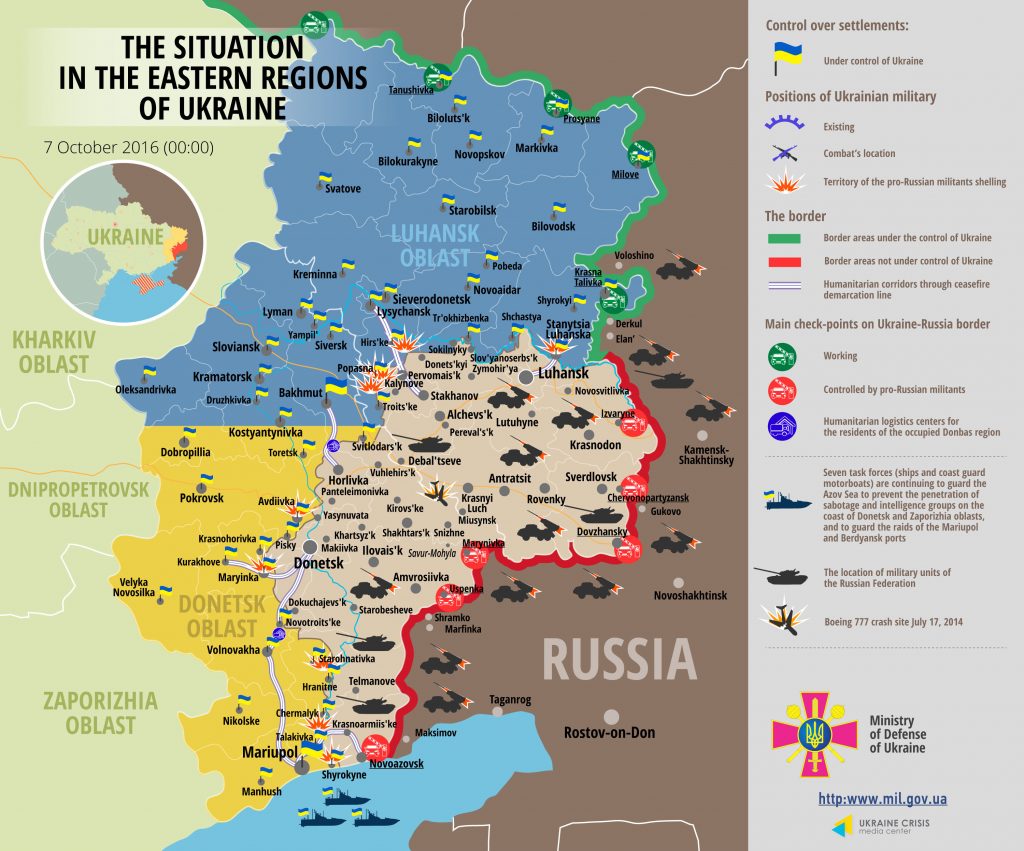 In the Donetsk sector military actions took place only in Avdiivska industrial zone. Militants made a series of quite long-term attacks of the Ukrainian positions. Especially powerful was held late in the evening when militants used mortars and guns. They fired more than 60 artillery shells. In the past 24 hours militants carried out four attacks, one involved usage of heavy weapons.
Ukrainian Armed Forces incurred no casualties in the past 24 hours, three soldiers were wounded. Confirmed losses of militants account for six wounded.

In the Mariupol sector two most restive points are Mariinka and Shyrokyne, where militants shoot actively both at day and at night. Militants carried out several attacks in Novohryhorivka and Pavlopoli. Ukrainian troops opened fire in response. “Also in Novoazovsk district 5 flights of drones militants were recorded”, said the spokesman of the MoD for the ATO related issues. In just the past 24 hours in the Mariupol sector 17 attacks of militants took place, including one mortar attack.
Military intelligence reports, that recently, during the maneuvers of the artillery units of the so-called “7-th separate motorized rifle brigade” of Russia-backed forces on the ground “Shymshynivskyy” militants mistakenly fired several shells toward the village Illyria, Lutugino area in the Luhansk region. “As a result houses and household buildings of local residents were damaged,” said Col. Andriy Lysenko.

Ukrainian border guards detained 32-year-old citizen of Brazil at the international airport “Borispol”. In 2014 he joined the self-proclaimed “Donetsk People’s Republic” (“DPR”) and took part in the hostilities against the Ukrainian troops, particularly in the battle for Donetsk airport and Debaltseve. “This “soldier of fortune” has a rich track record and almost 15 years of combat experience. On his conscience: taking hostages, manufacturing explosives, training in Russia and cooperation with local security services. In Donetsk region the Brazilian trained mortar gunners,” concluded the spokesman.