Hostilities continue virtually in all sectors, a firefight and 19 militants’ attacks take place in the Mariupol sector. 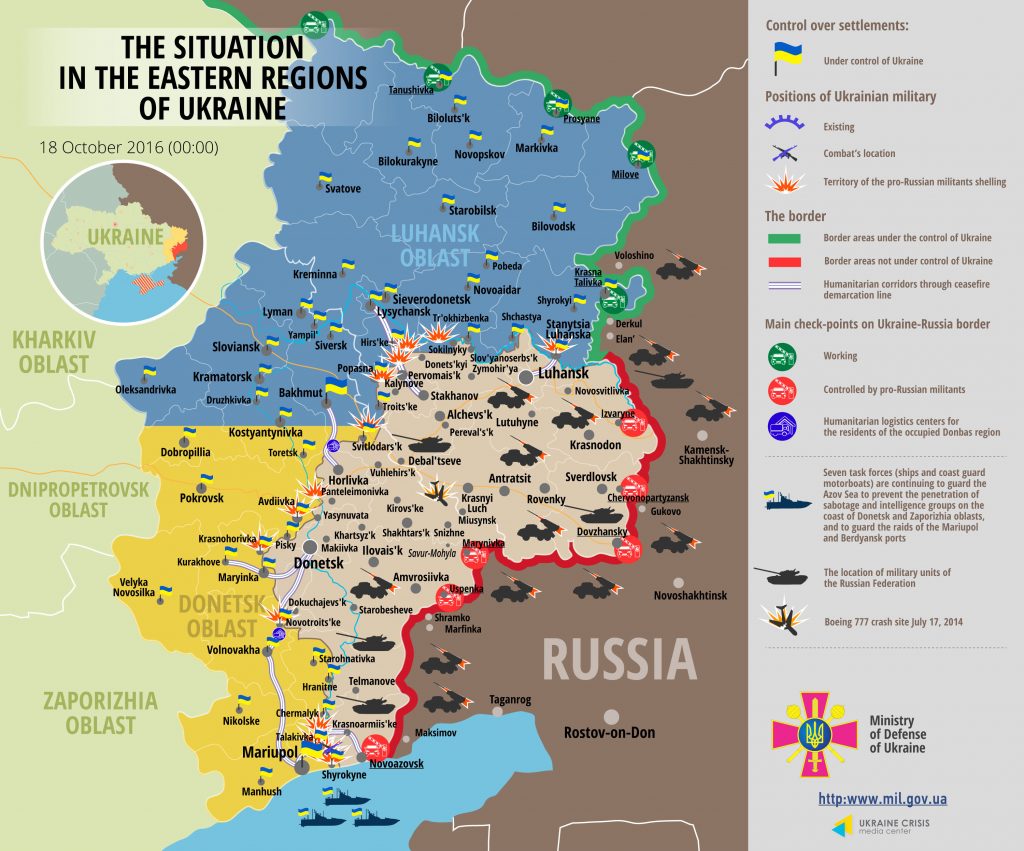 “Massive militants’ mortar and artillery attacks took place in every village in the vicinity of the frontline – Talakivka, Vodiane, Lebedynske and Shyrokyne. The shelling lasted for 11 hours non-stop. Another series of hostile artillery attacks took place at the end of the day in the same area. The total number of launched missiles exceeded 500, informed the spokesman.

A firefight took place near Vodiane. It continued about one hour. Militants requested artillery support during the fight. The attack was delivered simultaneously from two directions. “Hostilities virtually stopped in Mariinka district. Only two hostile attacks were registered in Krasnohorivka,” added Col. Lysenko. In total, one firefight and 19 militants’ attacks took place in the Mariupol sector yesterday, and 13 attacks involved use of heavy armor.

The situation improved in the Luhansk sector.  “Large-scale combat in the Popasna district reduced to several hostile attacks from light weapons which took place in Orikhove-Zolote-Novooleksandrivka frontline area,” said Col. Lysenko. Militants were active in two other flashpoints. Yesterday night insurgents shelled Stanytsia Luhanska using mortar launchers. Similar attack took place in Krymske but it was longer. In total, 17 mortar shells were launched at Ukrainian positions in Stanytsia Luhanska and Krymske. Six militants’ attacks took place in the Luhansk sector yesterday, and two of them involved use of heavy armor.

Hostilities in the Donetsk sector, like earlier, take place in certain areas. According to Col.  Lysenko, militants violated the ceasefire in three places: a shelling from armored personnel carrier happened in Luhanske, a mortar attack took place in Verkhniotoretske, and militants were shooting from small weapons in Avdiivka for about one hour. In total, militants conducted three attacks in the Donetsk sector yesterday; one of them involved use of heavy armor.
The Security Service of Ukraine (SBU) detained a militants’ informant. The woman was supplying Russian proxies with information on location and movement of Ukrainian troops in Bakhmut. This information was further transferred to Russian reconnoiters for the purposes of committing subversive acts against inhabitants of Donetsk and Luhansk regions. “During the search the SBU confiscated memory sticks confirming criminal activity of the woman,” added Col. Lysenko.
Ukrainian law enforcement officers stopped weapons supply channel for militant subverts. “A vehicle with weapons for militants was stopped at a checkpoint near Berezove village in the Mariinka district of Donetsk region. Law enforcements confiscated six rifles, namely a sniper rifle and an assault rifle,” informed Col.  Lysenko.