Kyiv, October 19, 2016. Russia-backed militants fired over 500 rounds from heavy weapons over the last day. In the Mariupol sector they switched to round-the-clock attacks between Pavlopil and Shyrokyne, Mariupol sector. Over the last day militants made 43 attacks including 29 from heavy weapons. One combat engagement is also reported. Militants were making massive attacks from heavy weapons starting 9 a.m. and until late evening, reported Colonel Andriy Lysenko, Ministry of Defense spokesperson on ATO-related issues. “Resulting from aggressive actions of the occupants the villages of Vynohradne and Pyshevyk were damaged. Thus, four residential houses were ruined in Vynohradne. There are no civilian casualties,” he added. 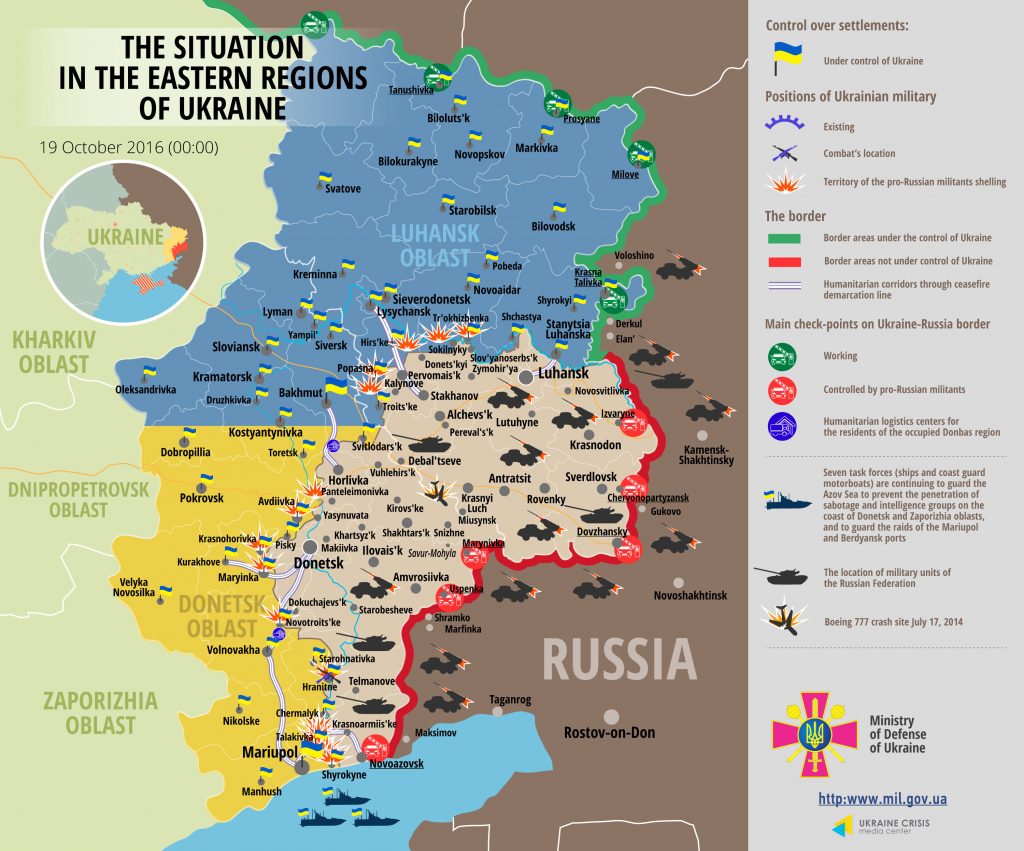 Militants also fired upon “Hnutove” check point. The check point was already closed for entry and exit at that time, so no civilians were present on site. According to the ATO spokesman, in addition to the southern part of the sector combat actions also took place in Krasnohorivka where militants were also using mortars. In Hranitne Ukrainian troops repelled a militant attack upon a Ukrainian strong point.

In the Luhansk sector fighting was on between Tryokhizbenka and Novozvanivka. According to Andriy Lysenko, in addition to small arms Russia-backed militant groups were using mortars. “It happened after the sunset in Krymske and Novozvanivka. Occupants fired over 20 mortar mines upon Ukrainian positions,” he noted. A total of 10 hostile attacks took place in the sector, three of them were made with the use of heavy weapons.

“Adversary used heavy weapons including mortars and artillery. The attack took place in the second half of the day. Another mortar attack took place in Vekhnyotoretske. It was quiet yesterday on the contact line between Troyitske and Novhorodske as well as in the Donetsk airport,” said the ATO spokesman. Russia’s proxies made a total of three attacks in the Donetsk sector over the last day, two of them using heavy weapons.