Overall situation is less intense, yet the militants shell at the “usual hotspots” in the Donetsk and Luhansk regions, no Ukrainian soldiers dies but three get wounded.
Kyiv, October 20, 2016. The situation in the Mariupol sector remains restless in Mariinka district and in Pavlopil – Shyrokyne frontline area.  Militants’ attacks involving use of heavy armor – mortar launchers and cannons – took place in Krasnohorivka, Talakivka and Vodiane. The number of launched missiles reduced and amounted approximately to a hundred, informed the spokesman of the Ministry of Defense of Ukraine on ATO related issues Colonel Andriy Lysenko at a press briefing at Ukraine Crisis Media Center. 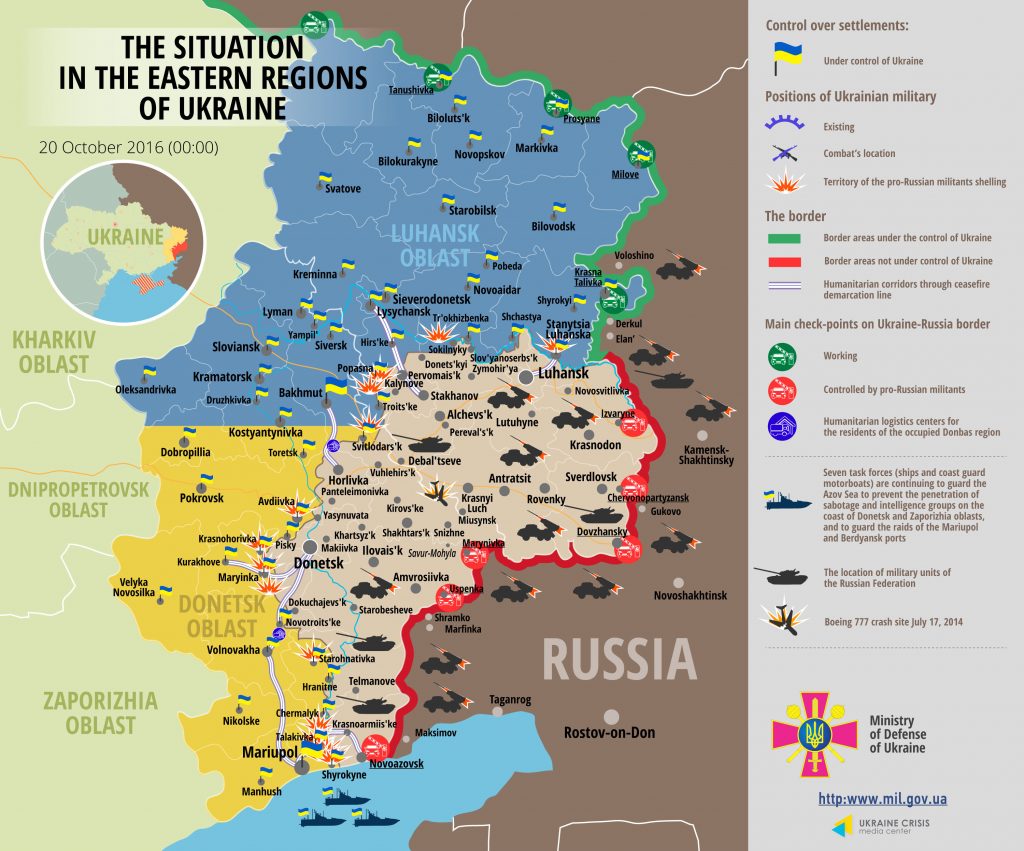 “Certain de-escalation was caused by the “Normandy Four” negotiations in Berlin, and it is not stable yet. In total, 21 hostile attacks took place in the Mariupol sector yesterday, and eight of them involved use of heavy armor,” he said.
Stanytsia Luhanska was the main flashpoint in the Luhansk sector. According to Col. Lysenko, militants conducted two intense attacks from mortar launchers. Another mortar attack was delivered by Russia-backed militants in Krymske. The situation was much calmer in the Popasna district. In total, militants conducted five attacks in the Luhansk sector, and three of them involved use of heavy armor.
Major hostilities in the Donetsk sector took place in the Avdiivka industrial area during the hours of darkness. “In addition to small weapons, the occupants used mortar launchers, shooting at our troops from several directions simultaneously. One hostile attack took place in Luhanske, and it lasted for quite a long time,” said the spokesman.
The armistice held yesterday in Novoluhanske-Verkhniotoretske frontline area and in the Donetsk airport. In total, five militants’ attacks took place in this area, and one involved use of heavy armor.
Ukrainian Armed Forces incurred no losses in combat yesterday, and three troops were injured in hostile attacks.
Col. Lysenko informed that investigators of the Security Service of Ukraine (SBU) jointly with police officers detained a militant of self-proclaimed “Donetsk people’s republic” (“DPR”) in Lysychansk. He was adjusting militants’ artillery fire and was spotting Ukrainian unmanned aerial vehicles. Moreover, intelligence services detained a man in the Dnipropetrovsk region. He was circulating information materials discrediting Ukrainian army and advertising Russia-backed militant groups.